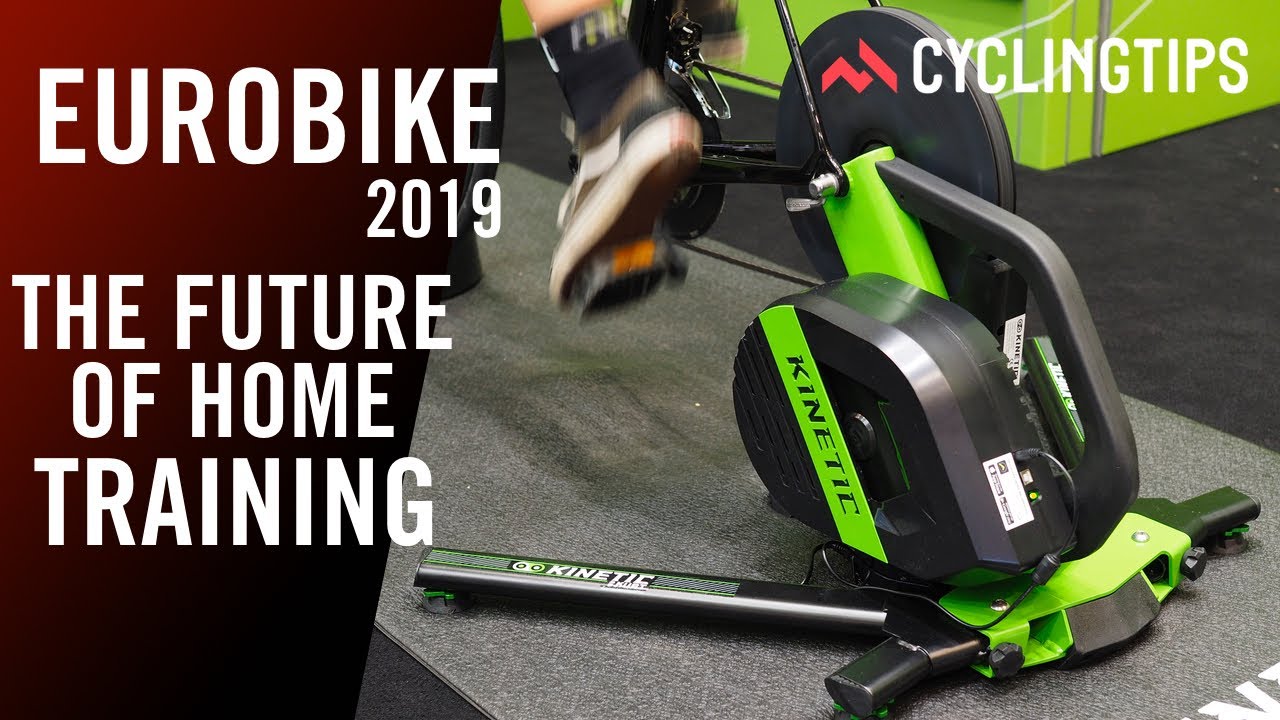 If there was one predominant theme from the recent Eurobike trade show, it was that indoor cycling is, well, in. Not only did segment giant Zwift have one of the biggest booths at the show, but many of the most significant product debuts from major hardware companies were also dedicated to riding inside, not outside.

But is this really where cycling is going, or is this just the latest trend that companies are latching on to in order to make a fast buck? And is it likely to fizzle, or are we seeing just the beginning of a long-term, upward trajectory?

To help us understand where things are going, I asked several major industry players for their views on why there’s suddenly so much attention being paid to going nowhere fast.

According to the folks at Saris, Stages, Wahoo Fitness, and Tacx (which was recently purchased by Garmin), the industry interest in indoor cycling isn’t something that is solely manufactured. Instead, their data suggests that, over the past decade or so, an increasing number of us are voluntarily spending more of our time riding indoors instead of outside — especially on the road — so it’s a natural response for the bike industry to react in kind.

Without question, one of the biggest motivators for the migration is time — or rather, the lack of it. As our daily lives have gotten progressively busier, so, too, has our amount of available free time decreased in tandem. More specifically, Stages Cycling senior vice president Pat Warner cited, “a lack of time as riders age and gain responsibilities.”

Going along with that decrease in available free time is an increase in prioritizing the time that we do have. While no one debates the idea that riding outside is generally preferable, there’s also little argument that training indoors is a more strategic way to improve your fitness in order to be better prepared for when we get to pedal in the great outdoors.

“Never before were you able to train so targeted in such an easy way,” said Bas Holtkamp of Tacx. “You can use your time far more efficiently.”

Needless to say, companies are also citing rider safety as one of the factors playing into the move indoors as well. There’s no way to sugarcoat it — road riders have grown increasingly wary of sharing space with vehicular traffic, and whether it’s real or only perceived, the sense is that it’s more dangerous to ride on the roads than it was even just a few years ago. Riding indoors may not bring the same sense of joy as you get from riding outside, but you also don’t have to worry about getting creamed by some idiot who’s busy updating their Instagram feed instead of paying attention to what’s ahead of them.

And yes, in this day and age of Facebook, Twitter, Instagram, and other similar platforms, there’s even a social aspect to the rise of indoor cycling as well.

“Not only do platforms platforms like The Sufferfest and FulGaz engage the eyes and mind to further immerse a rider into their workout but platforms like Zwift, among others, now allow you to ride virtually with friends and competitive cyclists from around the world,” said Wahoo Fitness director of product management Jose Mendez. “This has spawned the era of social riding and racing indoors, which is a truly powerful force helping drive growth in the indoor cycling category. There is no denying the power of online platforms to enhance the indoor experience.”

The associated equipment has improved dramatically in recent years as well.

Back in the late 1990s and early 2000s, I worked at a bike shop in the midwestern United States, a region renowned for its brutally cold and long winters. To help keep the lights on, we dedicated an entire room to a dual side-by-side Computrainer setup, complete with a big-screen TV. The experience it provided paled in comparison to what’s on tap now, but even that then-rudimentary level of interactivity and “gamification” of the experience made riding indoors a far less arduous process.

Now, there’s a wealth of choice on both the hardware and software side. Zwift is the obvious industry leader on the gamification front, but other smart platforms — where the software actively controls the resistance on the electromagnetic trainer — such as Sufferfest, FulGaz, TrainerRoad, Rouvy, and others still provide a level of realism that we could only dream of a few years ago.

“Today, a cyclist can ride and feel a realistic pedaling action and even experience the bike move under them to reflect actual road grade changes,” said Mendez. “The riding experience is so much better that it does not even compare to five-plus years ago.”

Wahoo’s Kickr Climb add-on module, for example, raises and lowers the front of your bike automatically, depending on what’s happening on-screen, to provide a sense of actually climbing and descending, while the Kickr Fan can also be adjusted to increase or decrease fan speed based on how “fast” you’re going.

More recently, Saris has released its new MP1 Nfinity rocker platform, which glides back and forth and tilts side-to-side to provide a surprisingly realistic sense of actually riding on the road. It’s expensive, yes, but Saris nevertheless anticipates it to be a very hot product for this coming indoor season.

The most closely-watched category, however, is arguably dedicated indoor bikes: high-end machines similar in theory to Peloton and other traditional exercise bikes, but designed to feel more like your regular outdoor machine with customizable touch points, and intended to pair with your choice of online training software systems.

In just the last year or two, we’ve seen indoor bikes from Stages, Tacx, Wahoo Fitness, SRM, and a smattering of smaller brands. Saris has plans for one, too.

“We developed our first bike over 15 years ago and still feel like we have something unique to contribute,” said Saris director of consumer products Jesse Bartholomew. “So yes, we have plans for a bike.”

Given the various factors at play here — worries about road safety, increasingly hectic schedules, improved software — it perhaps shouldn’t come as any surprise, then, that so many companies are producing premium equipment to meet the apparently growing demand. But that said, so many of these dedicated indoor bikes are very expensive, rivaling the cost of a good outdoor bike.

Is this a trend that the market can truly sustain? After all, how many people can really afford something like this? Or, alternatively, will things eventually move downmarket, with lower-cost options that are more affordable?

“We think this market is definitely there,” said Holtkamp. “We see that there is a need for a total solution for indoor training, which simulates outdoor cycling as much as possible, also that ease of use and user experience are important for the consumer. In addition, there are many families where several people cycle, but only have space for one bike trainer. The Neo Bike offers a solution here.”

Wahoo Fitness is clearly bullish on the segment as well.

“Our estimates put the overall category growing at over 30% year-over-year,” said Mendez. “Any avid cyclist understands the drive to feel better while you ride outdoors, to beat your buddy, to win your race. Indoor cycling makes those goals easier to achieve. From just allowing you to get a quick ride late at night due to a long workday to hyper-focused FTP based intervals for athletes, there is just no better tool to make you a stronger rider [than riding indoors]. The category has a lot of potential and is obviously quite young, so while we believe we provide the best product, we do see enough space for multiple players.”

Saris, on the other hand, seems a little more skeptical — and depending on how things play out long-term, perhaps more realistic.

“No, there is not a big enough market to support everybody that is expressing interest in pursuing it,” said Bartholomew. “The business case is easy; the technical know-how and channel support structure is the hard part. It feels similar to the power meter market ten years ago where everybody talked about the market potential and how simple strain gauge technology is so we saw a lot of market entrants. Sooner or later, you realize there’s a whole lot more to it than slapping a strain gauge on something. You can see something similar happening with smart trainers today, and I suspect we’ll see it in indoor bikes as well over the next 12 to 24 months.”

Regardless of what happens with the high-end indoor cycling market, which is clearly already being more than adequately served, it remains to be seen how things will pan out elsewhere on the cost spectrum.

If indoor cycling really is growing as much as some of these companies believe, it stands to reason that riders with more modest budgets will want to take part as well. Price points at this end of the spectrum continue to fall — albeit much more slowly than the high end is rising — but it seems like we’re already approaching the lower limit for where companies feel they’re able to still provide reliably high-quality performance.

One cost barrier is power accuracy, one of the keys to fair competition in the growing world of e-racing. Zwift, in particular, is pushing the concept of e-racing hard, but in order for the idea to work, the associated hardware must be certified in some way as providing an accurate reflection of the riders’ real-world power output.

So where will things really go from here? Your guess is as good as mine.