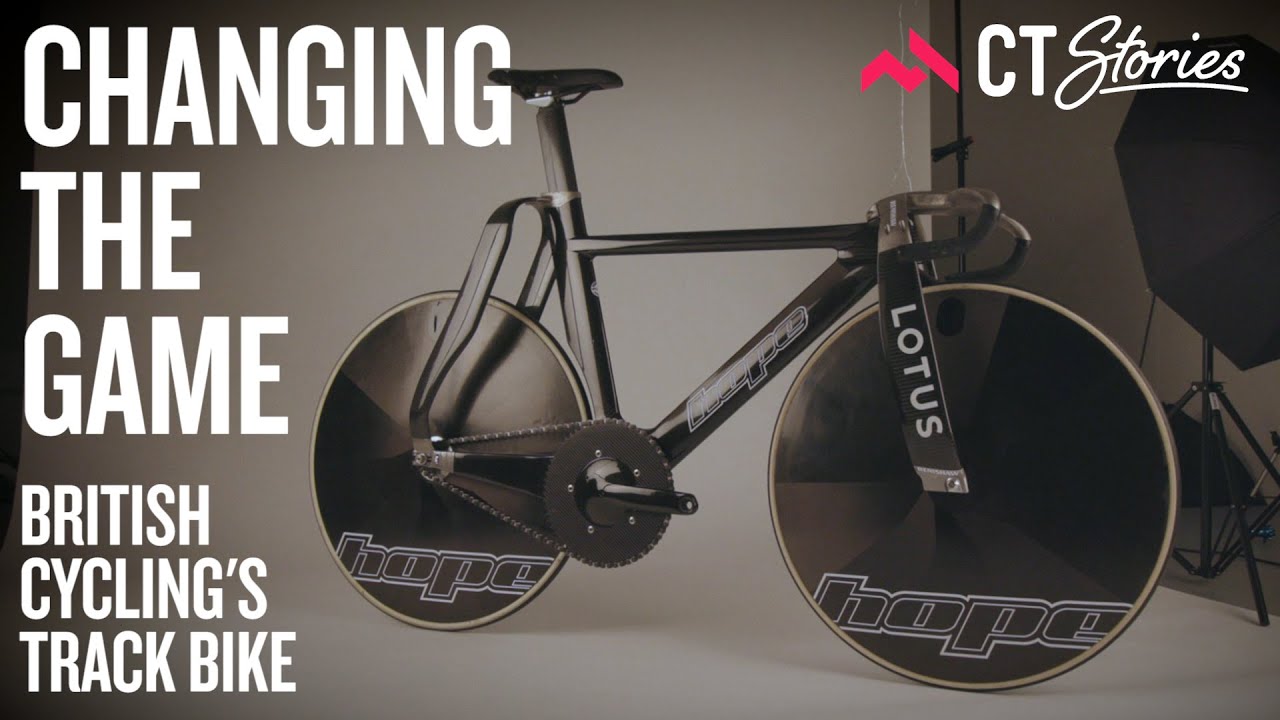 British Cycling debuted a groundbreaking track bike back in November 2019 in its bid for Olympic glory in Tokyo, Japan. Without a doubt, the bike is visually striking, and a clear departure from conventional design, with its unusually widely-spaced fork blades and seatstays. This was all done in the name of aerodynamic efficiency, we surmised, and after a trip to Hope Technology in Barnoldswick, UK — who manufactures the bike for the federation — it turns out we were right.

But what’s surprising is how relatively minor that gain is, and the lengths British Cycling went to to extract that advantage.

With the Hope HB.T bike’s Olympic debut just a matter of days away, we thought we would revisit James’ chat with one of Hope’s design engineers, Sam Pendred, on how this bike and deisgn came to be.

By and large, bicycles these days — even the aerodynamic variety — are often designed on their own, independent of the person riding them. Wind tunnel testing often includes a rider as part of the validation process, but it’s still the norm to consider the pairing after the fact.

According to Hope design engineer Sam Pendred, however, the overall layout of British Cycling’s new “HBT” bike was dictated by the philosophy that the bike-and-rider should be considered as a singular unit right from the start.

“You can design a very aerodynamic bike, but as soon as you put a rider on, it kind of ruins all the hard aerodynamic work you put into it,” he explained. “If you actually go from square one, and think about the rider as part of the bike and integrate the rider into the design, you can end up with a radically different shape compared to if you were just looking at the design of an aerodynamic bike.”

We initially hypothesized that the widely-spaced fork blades and seatstays were a way to minimize the aerodynamic interaction between those structural members and the spinning wheels — but we were only partially correct. According to Pendred, the unconventional layout instead primarily helps smooth the airflow around the rider. How much more aerodynamic, you might wonder? Not much — just 2-3%. But while that may seem like a tiny improvement, it’s nevertheless a measurable gain over existing bikes that are are already hyper-efficient aerodynamically. Moreover, track events are often won and lost over much, much smaller margins, so even tiny gains have the potential to mean the difference between gold and silver.

Aerodynamics is only one part of the performance puzzle, of course; there are also the more traditional metrics of weight and stiffness, and Pendred says those were carefully considered as well, especially given that the unusual shape made achieving that combination particularly challenging.

“The design of this bike posed some challenges just because of the larger surface area that this bike has in total volume aspect compared to a conventional bike,” Pendred said. “We were looking at ways we could use the material differently to ensure that we had the strength and stiffness in certain areas, but manage to keep the weight down as well. It’s not been officially confirmed yet, but we’re definitely looking at below the 1,500g mark for the frame weight, which we’re quite happy with.

“For a lot of the complex areas where the tubes were joined together, 3D-printed titanium was used, such as the dropouts and the collar pieces to join the seatstays to the actual seat tube of the frame [and] areas such as the handlebars, which are effectively a very complex shape and can be specifically designed for the rider’s needs. 3D printing technology allows us to achieve this rapidly, and also allows for changes to be made when needed. It can also result in a lighter and stiffer part because you can rely on internal structures, which you previously couldn’t do before with hollow structures. So we can make more complex shapes, and we can make them stronger as well.”

The manufacturing of the bike itself is a collaborative effort between three other UK entities: Hope Technology, Renishaw, and Lotus Engineering. Renishaw produces the 3D-printed titanium nodes, Lotus takes care of fabricating the custom cockpit assemblies for each rider, while Hope molds all of the carbon fiber and handles the final assembly.

“We do all the molds for the frame, and lay up all the carbon,” said Hope head of sales and marketing Alan Weatherill. “The plies are all worked out here, it’s all cooked here, and it’s cured here in-house. Even the lacquering and finishing are done in-house here as well. We currently get the 3D-printed parts in, and then bond the whole frame assembly here, so there’s a complete frame leaving the factory.”

“It’s a little bit sort of revolutionary what we’re trying to do,” explained Hope design engineer Mark Reynolds. “We’re trying to create a monocoque construction for the wheel, so that’s basically both sides of the rim section and also the center hub as well. Everything is molded as one. The wheel will be as good as the mold tool, and the mold tools are very, very accurate.

“Standard construction might be done in a couple of pieces that you bond together,” he continued. “You’re very much relying on a bonding fixture, whereas when you mold as one piece all in the same tool, it allows us to be that little bit more accurate.”

Hope is already a well-known brand in the mountain bike world, and highly regarded for its quality of construction and all-weather durability. But the company is also starting to move into the road space, and the attention surrounding this particular collaboration will certainly help things along in terms of public perception.

“Getting the track bike for the Olympics is a pretty major PR win for us, but realistically, it’s not just down to that,” Weatherill said. “Ian [Weatherill], the owner of the company [and Alan’s brother – Ed.], one of his things is ‘there’s this fuzzy feeling’. He wants that pride of actually having a British cyclist — or any cyclist — riding around the track in Tokyo on a Hope bike and potentially winning gold medals. Also, because we’re looking at trying to diversify our range, the track bike is a perfect springboard toward the road.”

Yes, it can be yours

Current UCI rules dictate that any equipment used in competition has to be available to the general public in some way, shape, or form. Plenty of criticism has been directed at British Cycling in the past for previous team bikes that may have technically been available, but for all intents and purposes, were impossible to actually get. This time around, though, there at least seems to be the intent of putting proper replica bikes up for sale.

“The UCI state that the frame has to be commercially available, and this could potentially pose some issues for other manufacturers,” Pendred said. “But we have the capabilities to manufacture a frame from start to finish, all under one roof, so for us, it’s actually worked out quite well. It’s relatively easy for us to offer this to the market as a full bike.”

How much will that bike actually cost, and how will it actually be available? Those details remain to be worked out, but for the well-heeled British Cycling fans out there, it at least sounds quite encouraging that you might be able to pedal one of these around your local velodrome some time in the relatively near future.