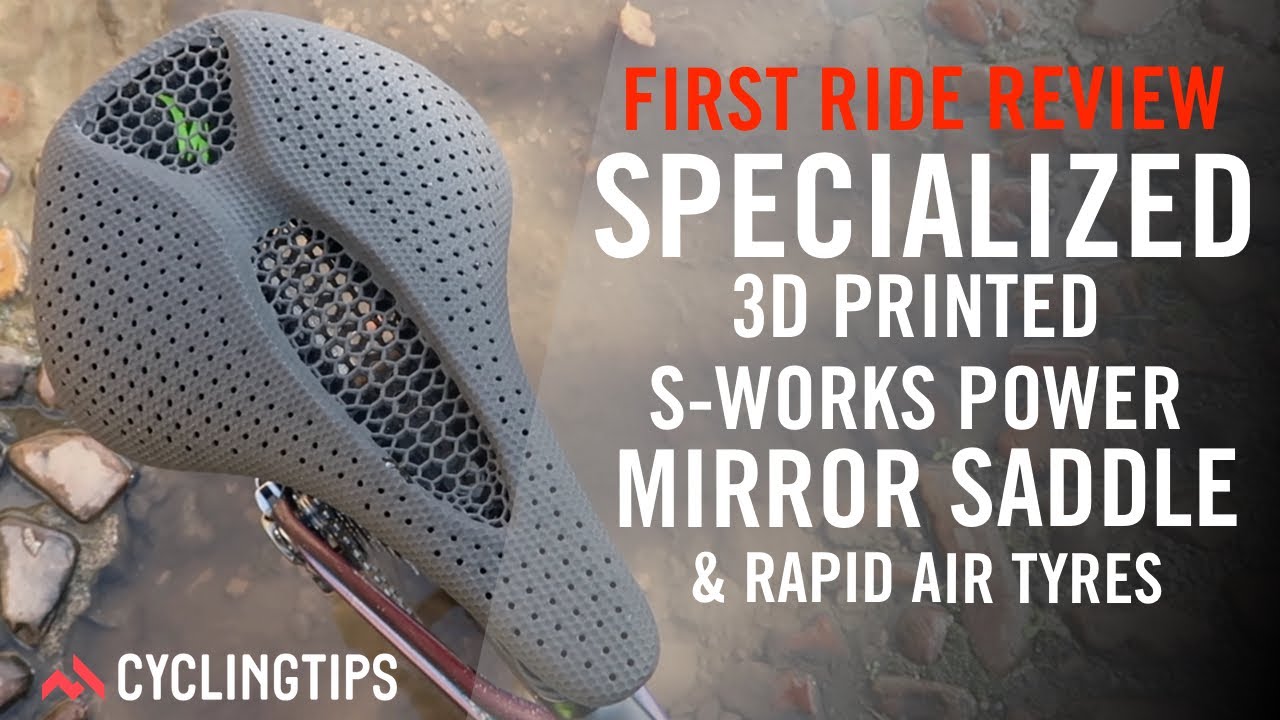 Robert Patrick is known to some as Mulder’s replacement on the X-Files, or ‘that’ copper who turns up for a cameo in Wayne’s World, but to the co-founder of Carbon, Dr. Joseph De Simone, Patrick is better known as T-1000. Why? Well, Robert Patrick’s transformation from molten metal back into Arnie’s hard to kill nemesis in Terminator 2 was the inspiration behind Carbon’s DLS (Digital Light Synthesis) and CLIP (Continuous Liquid Interface Production) technology.

This is the technology that Specialized has harnessed to produce what it hopes will be a leap forward in saddle technology, with improvements to comfort, power transfer and stability.

Specialized announced the S-Works Mirror saddle back in late August. Luckily, at Worlds in Yorkshire this year, I got the chance to ride one. I say “luckily” as there is currently only about 20 in the wild at the moment — a few for professionals to use and a few for us fortunate journalists to review. But worry-ye-not: Specialized and Carbon will be ramping production up significantly for the Mirror’s public launch in 2020.

Carbon is a California-based 3D printing company that isn’t new to working with sports brands. Adidas has utilised the technology to make soles for a range of trainers, and Riddell has introduced the technology into the NFL by producing a range of custom helmets and pads. It’s clearly a manufacturing process that has many applications. So what is DLS and how does it differ from standard 3D printing?

The machines that Carbon uses to make the Mirror saddle look very similar to standard 3D printing platforms, but the process differs significantly. Light from a UV light source projects a series of cross-section images of the desired product into a bath of Carbon’s own proprietary resin. The resin that’s struck by the UV light partially cures into the shape that the cross-section has blasted out. The part then slowly emerges from the resin, like Robert Patrick’s liquid metal man.

Oxygen is pumped into the bath of resin throughout the process to form a minuscule barrier between the liquid and the part being ‘printed’. This oxygen layer or ‘dead zone’ allows the part to be finished precisely and helps it rise continuously throughout the manufacturing process.

From there, the saddle’s upper is then thermally cured. This process kicks off a chemical reaction within the resin that sets the item into its final form.

For more on Carbon’s DLS and CLIP processes, be sure to watch the video below:

All in all, it’s an impressive process and one that Specialized hopes to bring to its Concept stores worldwide, in the not-too-distant future. Why? Because it’s a rapid process — roughly 30 minutes to print the saddle upper — and highly customizable. Theoretically, it should allow Specialized to custom print a saddle in store in no time at all. But that’s a ways off yet, or so I was told.

It’s taken Specialized an impressively quick 10 months to go from concept saddle to finished product, cutting development time down from what would usually be around 22 months. This is again due to Carbon’s processes. Being in the same part of the world, Specialized and Carbon have had the opportunity to work closely on the project. I was told that designs could go from computer-rendered images to a rideable product in a day. Previously, to produce a prototype saddle, a piece of foam, material and padding had to be cut and placed together — far from a quick process.

Carbon’s processes also allowed Specialized to test far more prototypes than ever before — 70 design iterations in total. The final design incorporates 1,400 struts and 8,000 nodes all finely tuned to do a specific job, and in a way that traditional saddle manufacturing technology just doesn’t allow. It makes for a saddle that looks like it’s been designed by a bee colony.

The finished product isn’t a one-piece construction. Instead, you have the standard carbon rails and shell with the printed upper glued to the shell. Come March, the Mirror will be available in two widths: 143mm and a 155mm. All this tech and development doesn’t come cheap though — the saddle is predicted to cost around US$500. That’s not a saddle you’d be happy to scuff up against the cafe wall.

Specialized is also considering this technology for more than saddles. When quizzed they admitted that it makes perfect sense for other contact points: bars tape, innersoles and padding in shorts. They were a little cagier when I pressed them about whether it could be used for tyres — we have seen 3D-printed tyres on numerous prototype cars at motor shows around the world. The technology could theoretically be used for helmets too.

An interesting question arises: when Specialized does start offering the Mirror as as a customisable product — making it perfectly fitted to your derriere — would you actually need padding in your shorts? If not, would that make that high asking price more reasonable?

Two days spent playing with this saddle was far from enough time to say whether the Mirror is a game-changer or not. But in those two days, I was quite impressed by how quickly I took to the saddle. Usually, at launches, the saddle is the one thing that can distract from the ride.

When I first hopped on the bike, my initial impression was how soft the saddle felt under me — it seemed to sink quite a lot, far more than most racing saddles. This gave me some doubts, but I can happily report that those doubts were quickly washed away.

Being used to firmer saddles the softness was quite a stark contrast at first, but after roughly 20 minutes I realised I wasn’t thinking about the saddle at all. I wasn’t squirming about or trying to find a comfortable place to slide to on the saddle. I wasn’t noticing the softness any more, and I was impressed to notice a lack of pressure or hot spots. Basically, it felt very different to anything I’ve previously used.

Like anyone, there are certain saddles I get on with. The Fabric Line and Scoop range, plus Syncros’ new Belcarra, have treated me well. These three feel like traditional racing saddles — I find them very comfortable and can pedal happily all day every day without a problem. The Mirror, though, is a very different perch. It holds you rather than leaving you resting atop it. Your backside seems to be wrapped by it, and in doing so, you seem to be in a position where you don’t slide about. The texture of the material clearly helps with this a lot.

I’m seriously interested in seeing how the Mirror performs on longer rides and whether that locked-in feeling aids with power transfer. I’m also keen to see how robust the upper is, as it certainly doesn’t seem as scuff- or tarmac-proof as traditional materials.

Is it worth the predicted asking price of around U$500? Yes and no. If it lives up to its claims and you have the money it could be a good long-term investment, especially if, like me, you take to it quickly. That asking price can easily be spent over a year chopping and changing between saddles that you think you’re going to get on with then find out you don’t.

But if you’re happy with your current saddle and don’t haven’t any problems, why change? I’d be inclined to say it all comes down to how much you’re willing to spend and how much comfort you’re after. For instance, one of my current saddles costs €40. I love it, it’s comfortable, and I’ve never had saddle sores. That’s a lot of bang for your buck. You need a huge lot of bang for 500 bucks. Does the S-Works Power Mirror saddle offer that much bang? Only time will tell.

We hope to get our hands (and backsides) on the Specialized Mirror saddle for a more in-depth review early next year.

CyclingTips Podcast: The end of the Worlds

CyclingTips Podcast: The end of the Worlds