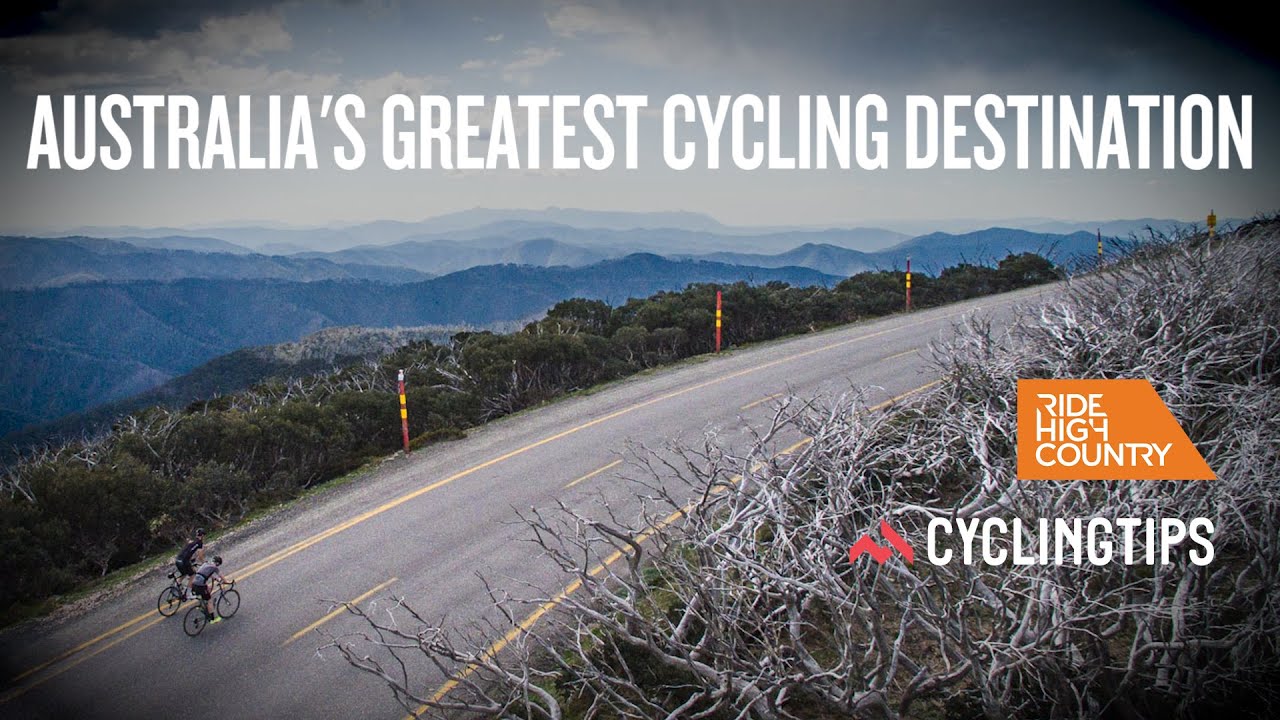 Highlights of the High Country: our top 10

Victoria's High Country, in the state's north-east, is a paradise for cyclists. Over several visits to the region, we've discovered pristine mountain peaks, quiet gravel roads, generous hospitality and fine local produce. These are our High Country highlights.

This content is brought to you in partnership with Ride High Country.
Find out more about our sponsored content policies here.

If you picture a dream cycling destination, what does it look like?

Chances are, you’re imagining a few key details – quiet roads, scenic surrounds and challenging climbs. Perhaps you just want to road ride, or maybe you want to dabble in a bit of gravel, or even some mountain biking as well. Off the bike, you’d want to feel welcome, and after all that hard riding you’d deserve a few creature comforts, like quality coffee, food and drink.

It’s a high bar for any one place to clear. But Victoria’s High Country, tucked up in the state’s north east, ticks all those boxes and a few more.

The High Country is best known for its long road climbs, which rise from lush valleys into the sky. At their summits are ski resorts that are winter wonderlands during the colder months, but embrace cyclists when the weather warms up.

Mount Hotham, a 30km climb to the highest paved pass in Australia, unfolds into bird’s eye views of ridges and mountains rising like waves. The Falls Creek ascent winds up to above the treeline, to ghostly grey trunks and the village that hosts Peaks Challenge, one of Australia’s great gran fondos. Mount Buller, in the region’s south, is home to Australia’s first Epic mountain bike trail.

In all, there are seven major peaks dotted throughout the region, comprising the 7 Peaks Challenge, which challenges cyclists to conquer the lot in a season.

In 2017, CyclingTips visited the region to tackle four of those big climbs. We rode up Falls Creek with Marianne Vos, sweated up Mount Hotham and Mount Buffalo, got pummelled by a summer storm on Mount Buller, and left with an even greater affection for the region than we had when we arrived.

In 2018, we were back again – this time not to ride the high mountains, but to discover the best bits in between. On gravel roads through pine plantations, and gentle climbs between valleys, we discovered a slower-paced but no less beguiling side to the High Country.

The region is enthusiastic in its embrace of cycling, with businesses throwing their support behind two-wheeled visitors. You’re never far from great coffee or food in the High Country, with delicious local produce being one of the region’s great hallmarks.

The High Country Brewery Trail – a collective of nine craft brewers scattered around the region, most of them passionate cyclists – is a shining example. From Whitfield to Wangaratta, Beechworth to Bright, these breweries serve up refreshing ales and offer MTB trail recommendations to their visitors.

If wine’s more to your taste than beer, there’s plenty for you in the High Country. The King Valley in particular is one of Victoria’s great wine regions, with such big name producers as Brown Brothers and Sam Miranda hailing from the north of the Valley, with a cluster of phenomenal smaller producers around Whitfield.

The alpine resorts might get all the attention during winter, but the towns of the High Country have plenty to offer visitors too. The historical towns of Beechworth and Yackandandah had their first golden age during the mid-19th century gold rush, but are seeing a renaissance today as people make a tree-change from the city, or establish vibrant new businesses in the area.

Bright, with its wide tree-lined boulevards, is widely loved by Victorians of all walks of life; larger towns like Mansfield and Wangaratta pair all the amenities of a city with the quieter pace of life the region is known for. They each make excellent bases for a training camp or a riding getaway.

The High Country is famous for its road cycling and mountain biking, but it’s also richly endowed with rail trails. Running through the region are three major rail trails – separated paths meandering along the gentle inclines of former railway lines – which offer a more relaxed way of exploring the area.

The Great Victorian Rail Trail (134km, from Tallarook to Mansfield), Murray to Mountains Rail Trail (116km, from Wangaratta to Bright, with an off-shoot to Beechworth) and High Country Rail Trail (80km, from Wodonga to Shelley) are rightfully loved by riders from across the spectrum. On those idyllic gravel paths, you can ride through a shifting landscape of mountains and farmland, entirely unbothered by the pressures of the outside world.

Over the years, we’ve spent many happy hours with the tarmac and dirt of Victoria’s High Country rolling beneath our tyres. We’ve threaded our way along peaceful valleys, ambled along rail trails and lost ourselves in a maze of forest and gravel roads. At the end of our days of riding, we’ve quenched our thirsts with tasty beers, eaten delicious meals, and rested in hospitable surrounds.

Perhaps it is these constant dopamine hits that keep drawing us back to explore new roads and revisit old ones; to drink in the High Country’s clean air, crest its mountains and speed back down again.

The climb of Mount Hotham is a brute, but it’s arguably the High Country’s most iconic ascent. Winding upward for 30km, from the pretty village of Harrietville to the summit, you’re rewarded with a constantly shifting landscape and some genuinely stunning views. Roughly speaking, the climb can be split into thirds – a rude opening, a gentler middle section, and some tough ramps in the finale. A couple of hours rewardingly spent.

Set in prime position in the tranquil town of Bright, the Bright Brewery has evolved into a real hub of the region. There are close ties to cycling, too: founder Scott Branson is an enthusiastic mountain biker, and the Brewery is a major sponsor of the Tour of Bright and a founding member of the High Country Brewery Trail. Our tip: grab a Hellfire Amber and a Bright Brewery Hero Board (a delicious mountain of meat) and settle in for the long haul.

The High Country is criss-crossed with enough peaceful gravel roads to occupy a lifetime. One of our favourites, though, is the stunning Woolshed Road, which ducks and rises through river crossings and rock formations from Eldorado up to near Beechworth. The crowning glory of the ride is the spectacular Woolshed Falls, a 35m cascade tumbling into a narrow ravine. In close second place is a debrief at Bridge Road Brewery in Beechworth.

There are many fantastic wineries in the High Country, particularly around the King Valley, but we have a particularly soft spot for Feathertop Winery, just out of Porepunkah. With a million-dollar view overlooking Mount Buffalo, there are few better places to indulge in a dignified meal and a glass of 2015 Durif.

Situated between Beechworth and Bright, Myrtleford gets a bit overlooked as a place you pass through rather than stop at. Coffee Chakra, a fantastic cafe on the main drag, is alone reason enough to take a break. The coffee’s good, but the real magic is in the fusion between your traditional cafe fare and Indian cuisine. Over several visits, there has not been a single dud dish served up.

The climb of Mount Buffalo is a beauty – 20.4km of quiet uphill toil to the Chalet. But it’s the descent that’s the real star of the show, with perfectly cambered corners and good sight-lines allowing you to enjoy the ride to the fullest. We’d argue it’s the best descent in Victoria.

On the banks of the Ovens River, just down from the Bright Brewery, the Bright Splash Park has a waterslide, a play zone, a pristine river flowing lazily through the middle of it, and is absolutely free. No wonder it’s so popular in the summer! Bonus: Ginger Baker wine bar and cafe, whose back courtyard overlooks the scene, is a fantastic place for parents to relax while the kids play.

King River Brewing is an interesting one. Rather than chasing the latest hoppy or hazy trends of the moment, they brew a refined selection of European styles – Kolsch, Hefeweizen, Saisons and Tripels amongst them – that are faithful to the style and solidly executed. The beer garden, though – that’s a thing of beauty, occupying a leafy, lush spot just out of Whitfield, with ample shade and gorgeous surrounds and games for the kids.

Parmas (or Parmies, or Parmigiana, depending on how wrong you are) are a staple of the Australian pub menu, and the Snowline Hotel in Harrietville comes highly recommended. With a generous schnitzel and Mount Beauty free range ham, it delivers the goods. Note: there are whispers that Wandiligong Pub’s offering might be even better – parma bible Parmadaze ranks it as the #2 parma in the state – but CyclingTips was unable to verify the veracity of this claim at time of print.

Around the back of Mount Buffalo, at the end of a quiet road from Myrtleford, you’ll find Lake Buffalo. On the right day, it’s as peaceful and picturesque a spot as you’ll find – and is the gateway to a wealth of interesting gravel roads linking back across to Mount Buffalo or over to the King Valley through pine plantations.

What do you reckon of our suggestions? What are your highlights of the High Country?