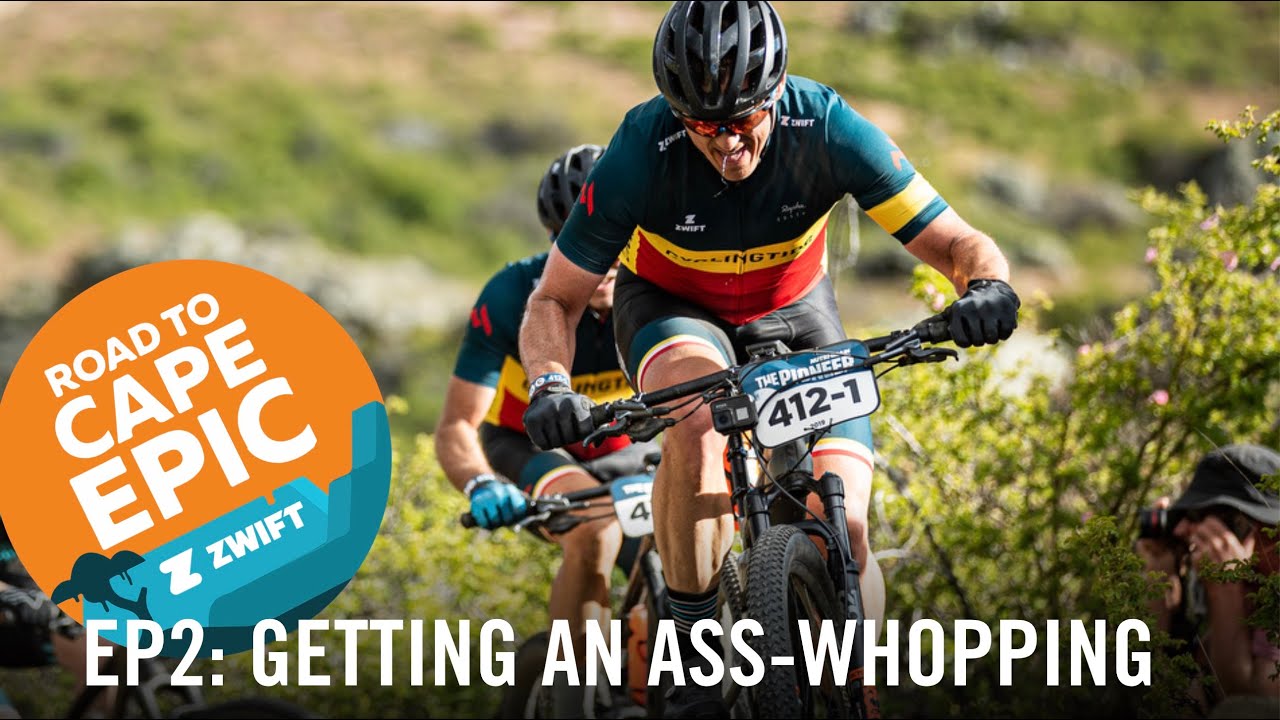 The Road to Cape Epic – Episode 2: Getting an ass-kicking at the Pioneer

The ABSA Cape Epic is the pinnacle of mountain bike stage racing. It attracts the highest profile professional athletes and the most competitive of amateurs, who over eight days test their limits across the stunning Western Cape province of South Africa. Last year CyclingTips Founder Wade Wallace and ex-pro teammate Allan ‘Alby’ Iacuone didn’t finish the 2019 Cape Epic, but in 2020 they’re having another crack and will be documenting their journey.

This piece is brought to you in partnership with Zwift.

Coming up to its 17th edition, the Absa Cape Epic is the pinnacle of mountain bike stage racing. It attracts the highest profile professional athletes and the most competitive of amateurs, who over eight days test their limits across the stunning Western Cape province of South Africa.

Earlier this year CyclingTips Founder Wade Wallace and ex-pro teammate Allan ‘Alby’ Iacuone fell short at the 2019 Cape Epic, but in early 2020 they’ll be having another crack. The pair are documenting their journey along the way. Please join them as their adventure continues in episode 2 of The Road to Cape Epic. You can find episode 1 here.

I got my ass kicked in New Zealand. There’s no better way of saying it, and I’m not going to make excuses. Six days of back-to-back suffering like I’ve never endured before, and I can’t blame anyone but myself. But it was necessary, both mentally and physically, because sometimes you need a good ass-kicking to weed out the complacency in life. To grow, you must be willing to go somewhere that’s uncomfortable.

The Pioneer served as a proper dress rehearsal before the Cape Epic which allowed ample time for us to address any misgivings and to work out the kinks. The Pioneer is two stages shorter than the Cape Epic, but features more challenging terrain and is still very competitive at the pointy end. The Pioneer would show us how deep we could go when we had to call on it, and would also give us the skills for riding as a team that only comes with experience.

GETTING TO THE START

– Setbacks are just setups for a comeback –

For anyone who has done this sport for long enough, you’ll know that some years are smooth sailing, and other years are full of setbacks. This year was the latter for me. An AC separation in my shoulder, cracked ribs (both my own doing on the mountain bike), and a deep vein thrombosis from a 19-hour London to Perth flight left me with only six weeks to properly prepare for the Pioneer with some consistency. They say these things come in threes, and I had certainly paid my dues.

I wasn’t starting from scratch, but I wasn’t going to come into the race with the necessary training load to have much depth. I knew I could probably fake my way through a day or two, but could I do more?

Before the Pioneer, to my surprise, I was hitting PB numbers from over 10 years ago. I’d never been heavier, but seeing my old power numbers gave me some confidence. I started working together with my coach, Mark Fenner, about two years ago and he told me at the beginning that one day it would ‘click’. After a long time of not seeing those old numbers, I didn’t believe it would ever happen. But it eventually did.

The first thing on my mind and the last thing I wanted to do was to let Alby down. He put in the same hard work and made as many sacrifices as I did to be here, and being the weak link is the worst feeling in the world. Perhaps this is what attracts me so much to this pairs-racing concept. It’s a dynamic that adds an extra level of accountability, motivation, and team work that is often missing when you’re a middle-aged cyclist.

Three cups of coffee then a breakfast of granola and one banana — it’s a pre-race routine that has served me well for years. But with stages this long, this intense, and that are such a slog, you’re fuelling to recover and then for the next day from the moment you stop racing. Burning 3,000 – 5,000 calories each day (plus another ~1,800 calories to maintain the body’s homeostasis) means a lot of food to keep down. It’s even harder as the race goes on and you lose your appetite.

As it turned out, I faked two stages with what some like to call ‘faux form’. Alby knew very well that I was off the pace, but our results looked OK on the surface. We had decent placings of fifth (prologue), fifth (stage 1), third (stage 2), fourth, (stage 3), and fifth (stage 4), which put us into fourth overall in Masters by the final stage.

Stage 2, the Queen Stage, could very well have been the hardest day I’ve ever had on a bike. It was a complete 180 from last year where Alby said it was the hardest day of his life on the bike. I kept it together on the outside, but was crumbling apart on the inside.

Stages 3 and 4 were called short due to weather, and thank goodness for that. But it didn’t let me hide any better. Shorter stages made for more intense racing, and intensity was something I had no more depth for. Stage 3 saw me dropped relatively soon into the stage, but on stage 4 I was the first person dropped straight after the start. I was pushing as hard as I could and wasn’t going anywhere. It got to the point where I was checking to see if my tyres were flat or my brakes were on.

It wasn’t until stage 5 that I completely crumbled. With worse legs than the previous day’s start, poor Alby helped me with some pushes for nearly an hour up the initial climb to keep up with our competition and try to move up into a GC podium spot. But after we got ourselves into a good position my legs started feeling heavy again, and on some level I was happy because it was because of a rear puncture. But after that technical debacle, we lost nearly 45 minutes and everyone we made ground on came flying past us. Perhaps it was all for the best, because I suffered like I’ve never suffered before to make it to that finish line. Type II fun all the way.

Reaching the end of these races is one of the most gratifying and difficult things I’m fortunate to have done. It doesn’t matter if you’re at the front of the race or at the back. We all conquered it together, went through similar hardships, and have a bond that can’t be bought at any price.

There’s nothing I hate more than failing to finish an event, and sitting on the outside while seeing everyone else have that bond. Knowing that feeling all too well (from this year’s Cape Epic) is the number one thing that keeps me going through those tough times. I don’t quote Lance Armstrong often, but “Pain is temporary. Quitting lasts forever“ rings true for me on so many levels and is what sometimes keeps me going.

– Failing to prepare is preparing to fail –

In the end we wound up fifth in Masters, which might sound OK on paper but, results aside, it’s not where we need to be to achieve our goal at the Cape Epic. Here’s what I learned from the experience:

A good ass-kicking is sometimes exactly what I need. It’s easy to forget how much motivation that ‘training scared’ gives me. The training is one thing, and I’m not an advocate of ‘more training is better’, but it’s all the little things that add up that caught me out. Going to the gym at lunchtime, watching what I eat, stretching, skipping recovery rides, etc. Those are the things that I first let go when I’m not training scared. Now, my motivation every day is to avoid having this same Pioneer experience at the Cape Epic!

Fortunately we have more than enough time to build on the foundation we’ve laid. With Christmas fast approaching I’ll need to be careful about too much holiday cheer — the plan for the next couple of weeks is to maintain some consistency with riding in around lots of family commitments. Time efficiency is key and this is where early-morning indoor training works a treat.

Specificity for the Cape Epic will be paramount. Zwift has carefully thought-out Cape Epic training plans, and with Fenz’s advice Alby and I will be doing 2-3 of those workouts per week – separate but together. We’ll also get outdoors and ride the mountain bike almost exclusively – road and trails.

Tuesday – Climbing threshold workout (3 x 15 minutes) with a 15-second burst of power at the beginning and end of each block of threshold.

Wednesday – 2 hours endurance pace – easy spin at around 200 W either outdoors or 90 minutes on Zwift.

Thursday – Sweet spot training (SST): 4 x 15 minutes at 85% of threshold (5-7/10 in terms of overall effort). It’s a very similar training stress to a 3-4 hour steady group ride, but we complete it in less than half the time. This pace and intensity creates great adaptations — a rider can sustain a relatively long time at or around this intensity compared to riding at or very close to actual threshold, without creating as much fatigue as full threshold intensity.

Saturday – Social bunch ride for 2 hours with moderate intensity, or Zwift session if kids have sport, or it’s raining. My favourite is the McCarthy Special. I’ve still never finished one of these:

Sunday – 4-5 hours out on hilly terrain with 2,500 m of climbing. This will be done on a mountain bike, even if it’s ridden on the road.

As we get closer to Cape Epic, we’ll begin to increase the intensity, and align our efforts with what we’ll use while racing. We’re fortunate to be in our summer here in Australia, so getting in a few races to simulate that intensity will be good.

What’s worked for us in the past in these events (and something we didn’t do this time around) is a big 4-5 day training block about three weeks out from the Cape Epic. The basic premise of periodisation is that the closer you get to Cape Epic (or whatever your target race is), the more like the race your training should become, without tiring yourself out.

Our goal is not only to finish the Cape Epic this time, but to race competitively and finish top 10 in Masters (Alby and I have some disagreements over this!). We know this is possible based on our placings last year, but as we experienced, just when things are looking good, disaster can strike at any moment.

Throughout January and February we’ll be doing some fitness check-ins to see how we’re tracking, and racing the Melbourne-Warrnambool (road race) and the Otway Odyssey (road and gravel races) as our final preparation events for the Cape Epic in mid-March, 2020.