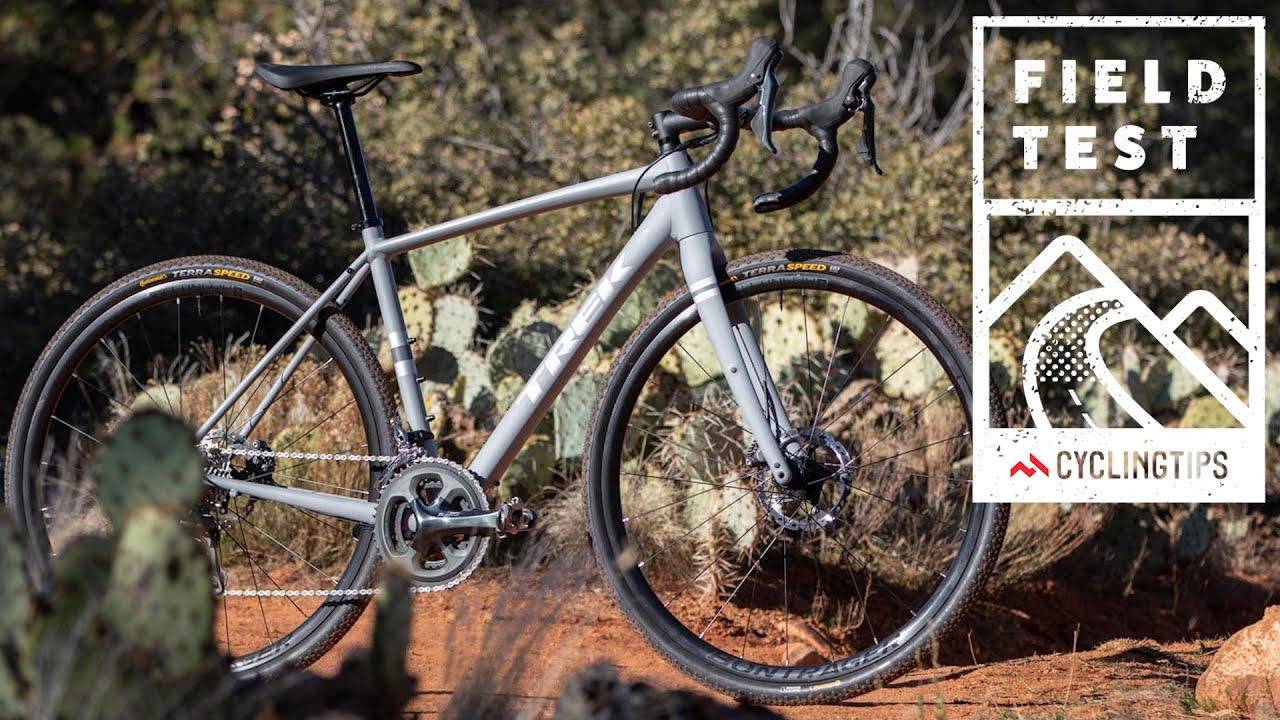 Trek’s Checkpoint was the most popular gravel bike of 2019, according to data Strava sent over last fall. Trek has sold a lot of them. This suggests that it’s a good bike, and indeed it is. But we found that it is good in a generic, pop-music, lowest-common-denominator, unoffensive-to-all kind of way. It takes few chances; it makes few errors. It works.

This, we believe, is exactly what Trek was going for. And they nailed it.

The Checkpoint comes in three tiers – we tested the most affordable, and simplest, version, the AL4, with an alloy frame and fixed rear dropouts. There’s a fancier aluminum Checkpoint, which comes with sliding rear dropouts, as well as a carbon version, which adds Trek’s ISOSpeed decoupler. These features add adjustability and comfort, but also cost and complexity.

I like to work in analogies. The AL4 is a white legal-sized envelope. It gets the job done. No gimmicks. Apart from being a little on the heavier side, the bike is absolutely nothing to complain about, or get particularly excited about. Everything on it works the way it is expected to work, there are endless mount possibilities and features for bikepacking and commuting.

Simple, in this case, is good. This bike is reliable; it’s the old friend that brings you soup when you’re sick, is never late for the airport pickup, and helps you move apartments.

In fact, that may be where this bike shines: in pickup-truck-like (or a ute-like, for our Aussies) utilitarianism. Would I want to commute on a BMC URS? Probably not. For US$1,600, the AL4 can tackle gravel, or dirt, or urban commutes, or panniers and touring. The possibilities may not be endless, but they are plentiful, and for such a reasonable price, it makes sense that this was one of Strava’s popular bikes of 2019, especially since lots of those rides come from “Morning Commute” or “Evening Commute”.

This is a bike anyone would feel safe riding to work and the next day taking on an adventure ride around the dirt roads outside of town.

No risks were risked in the design of the Checkpoint. In fact, the frame geometry is basically that of a road bike with extra clearance. The head tube angle for the 54 cm frame that we tested is 71.8 degrees, which equates to 61 mm of trail. A size 54 cm Trek Domane AL 3, which is a road bike, has a 71.3-degree head tube angle and 59 mm of trail. The Domane is technically an endurance road bike, however, only half a degree and 0.2 cm difference is not a ton of difference. The two bikes ride very similarly.

For the person who is comfortable riding a road bike, or commuting on a road bike, the Checkpoint AL 4 will not shock them. They will be comfortable and confident cruising around immediately.

All the comparisons to road bikes aside, the chainstay length on the Checkpoint AL frame is 43 cm. That means more stability, which is perfect for a lot of what this bike is made for: bumpy gravel roads, commuting, and touring. And this stability is key. A road-focussed Trek Emonda isn’t going to feel as comfortable on washboard gravel as something that’s longer and less aggressive.

Trek goes all out when it comes to mount possibilities on the Checkpoint AL 4. First of all, there are both high and low bolts for water bottle cages, depending on where you want your cages on the frame or if you need to move them for bags/bikepacking gear. There is an additional water bottle mount on the bottom-side of the down tube near the bottom bracket that could be for a third water bottle or for a storage bottle (for extra flat kit, extra food … unfortunately a banana would not fit in the Bontrager storage bottle, though).

Hidden fender mounts offer the possibility of full-coverage fenders, so no matter the weather or wetness of the roads you won’t have to change your adventure plans. On top of that, there are rack mounts on the rear triangle and additional options on the top tube as well. In short, there are a lot of mounts. It’s no Salsa Cutthroat, but it’s close.

For such a reasonably priced bike, the spec is impressive. This is the most affordable bike in our Field Test with fully hydraulic disc brakes (no hybrid system, no mechanical discs), and that refusal to cut corners is seen throughout the spec.

I have only one complaint pertaining to the parts that came on the bike, and that was the Bontrager R1 Hard-Case Lite 32 mm tires. These tires give away Trek’s intentions with this particular model – they’re not gravel tires. They’re commuter tires. That means they’re thick, very flat-resistant, and very uncomfortable on bad surfaces. They even have wire beads, so they’re super heavy. If you want to use the AL 4 as a commuter, leave them on. If you want to use it as a gravel bike, they need to go.

Once we had our Continental Terra Speed 40 mm control tires on there it made a noticeable difference in how the bike rode. And it’s worth noting that while Trek officially claims the Checkpoint AL can only fit 38 mm rubber, there was still plenty of room with (slightly narrow) 40 mm treads fitted.

The drivetrain is all Shimano Tiagra – no non-Shimano parts mixed in to save money. That means it all works flawlessly.

Unsurprisingly, Trek went with a 2x drivetrain, with compact-sized 50 and 34T front chainrings. That’s a good match for this bike’s road-like personality. It comes stock with an 11-32T cassette, which is great, though we’d prefer Trek put an 11-34 on there, which the Tiagra rear derailleur will take. There’s no clutched derailleur out back, but, again, that falls in line with the road-oriented rider that will probably be interested in this model.

The drivetrain worked so well there’s very little to be said about it. It’s like when you go to a restaurant and have a totally great meal that left you feeling full and happy, the service was fine and there’s really nothing to write home about.

The wheels are Bontrager Affinity aluminum rims (21 mm inner width, so reasonably wide) laced to Formula hubs. They do not come with Bontrager’s TLR rim strips — you need to buy those separately — but once you have them the wheels set up tubeless quite easily. They’re not the lightest, but again, no real complaints.

For those coming from the road, the Bontrager alloy handlebars offer a familiar compact shape without a gravel-like flare, while the rest of the Bontrager finishing kit is equally perfectly reliable. Everything except the tires is ready to grind gravel straight out of the box.

And as a final bonus, servicing this bike in the long-run will be easy. All the components used are cheaply replaced and easily sourced, and there’s not a single proprietary component bolted to this frame. A regular round 27.2 mm seatpost held by a regular clamp? Check (point). An English threaded bottom bracket? Trek.

As bikes go, this is a great one. Nothing was overly impressive, other than the cost, and nothing was disappointing. It may seem like the video review was on the negative side, but truly, it was just that it’s hard to write a review about a white legal envelope. The simplicity of the Checkpoint AL 4 is what makes it a fantastic bike for a lot of people.