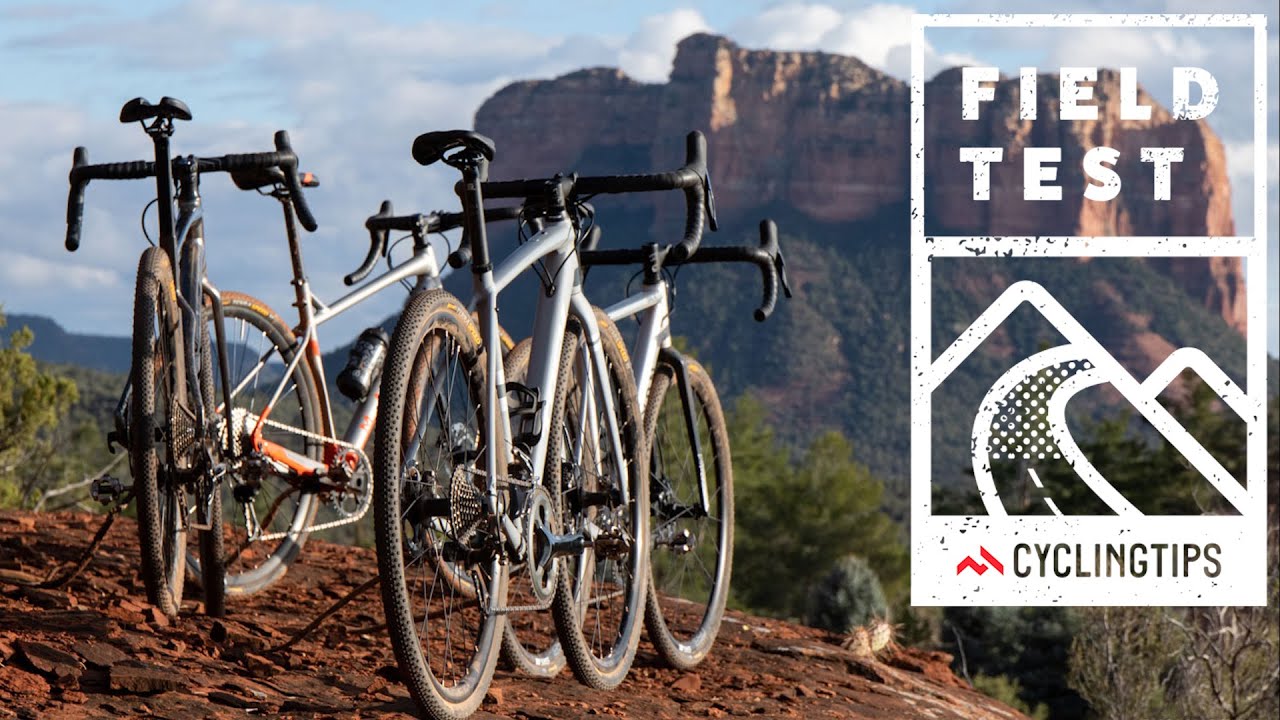 Step 1 – What terrain will you ride most? Be honest with yourself.

It’s easy to sit behind your laptop and dream of Dirty Kanza, but is that actually how you’ll use this bike?

Gravel bikes sit on a wide spectrum, running from almost-road-bikes to almost-mountain-bikes. Designs have diverged in this way because people use gravel bikes so differently. That’s why it’s so important to be honest with yourself about how and where you plan to use this bike, as well as being honest about your own comfort level off-road.

Are you going to ride a 50/50 mix of pavement and dirt roads? Grade 1 and 2 stuff? Then you’re on the roadie end of that spectrum. You probably want something closer to a road bike.

Are you going to ride rough 4×4 trails and maybe even some singletrack? Then a bike that borrows its geometry and designs from mountain bikes is probably for you.

It’s important to consider your own skill level off-road as well. Some gravel bikes are long and stable, which will be more confidence-inspiring on loose surfaces to riders used to pavement. Other gravel bikes are designed to be more playful, but these are generally less forgiving of mistakes.

How do you tell the difference? Well, that brings us to…

Step 2 – Match geometry to your terrain and riding style

Geometry gets complicated fast, so we’ll keep this very simple. When you look up a bike’s geometry chart, look for a few key figures to determine how that bike is likely to feel. The most important figure is trail.

This isn’t the only figure that matters — far from it. But it’s a good indicator of the bike’s intended use, and what the designer was hoping to achieve when they were first sketching ideas for a new model.

Trail is the combination of fork offset and head angle. Simplified, the bigger the trail figure, the more a bike will feel like a mountain bike. Longer trail figures make a bike more stable at speed, but with slower handling.

Smaller trail figures will result in handling more similar to a road bike, less stable at speed, with quicker, more agile handling. Most road bikes have trail figures in the 55-61 mm range. Modern mountain bikes are in the 80-100 mm range.

If you can’t find a trail figure, head tube angle is a reasonably good stand-in. Numbers under 71 degrees are trending toward the mountain bike end of the spectrum; higher numbers will be more nimble like a road bike.

Match these figures to the type of surfaces you plan to ride, and the type of rider you are.

Once again, consider the gravel spectrum – do you want your gravel bike to behave more like a road bike, or more like a mountain bike?

The two key areas of spec differentiation are drivetrain type and tire size.

If you will spend more time on the road or relatively smooth gravel, going fast up and down hills, then a 2x drivetrain is probably right for you. A double front chainring setup will provide a good gear range, while also keeping the gaps between each gear manageably small.

This is the reason why most road bikes still use 2x systems – big gear jumps when you’re suffering to stay on the wheel in front of you aren’t ideal.

If you spend more time on trails and rough 4×4-type roads, take a cue from the mountain bike world and go with a 1x drivetrain with a clutched rear derailleur.

1x systems, with only one front chainring, offer the same range from biggest to smallest gear (sometimes even more range, if you’re going with something like SRAM Eagle), but have fewer stops in between.

Mountain bikers use 1x systems because they are simpler, and because they are a better match for large and frequent changes in speed – think flying down a 100m descent and then shooting straight back up a short, steep climb. Shifting front chainrings in these sort of situations is a recipe for failure.

Many also appreciate the simplicity of a 1x drivetrain. There’s less to go wrong and less to think about.

All 1x drivetrains will come with a clutched rear derailleur. The clutch keeps the pulleys from bouncing around, and thus keeps the chain on. Some 2x drivetrains have clutches (such as Shimano’s GRX), and while they’re nice to have, they are not as crucial with a front derailleur keeping the chain on. The rougher the terrain, the more you want a clutch.

What size gravel tires do I need?

After you pick 1x or 2x, shift your focus to tires. Again, consider where you fall on the gravel spectrum.

Riders on the road end will be perfectly happy with a bike that maxes out at a 700×40 mm tire. That’s a normal road wheel and a nice, fat gravel tire.

This type of rider will generally be happy with a tire in the 32-40 mm range, again depending on the type of surface you’re on.

Riders seeking to get a bit more adventurous are going to want more tire clearance than that. That clearance can come in a couple forms. The most popular is a shift to the smaller 650b wheel size, which makes room for more rubber within the same frame.

There are also some gravel bikes designed to fit larger tires with larger wheels. The Evil Chamois Hager, for example, will take a 700cx50 mm tire. These bikes have similar tire clearance to a mountain bike.

If you’re on the mountain bike end of the gravel spectrum, make sure your gravel bike has clearance for at least a 45 mm tire, whether that’s on a 650b rim or 700c rim. If you’re more of a roadie, 40 mm is plenty.

This part is key.

You don’t need a long ride (or even one on gravel). Yes, the longer the better, but we found that our opinions of each bike reviewed in this Field Test began to solidify within minutes, not hours. Gravel bikes aren’t like road bikes, which are all comparatively homogenous in terms of geometry and ride quality. When you find a gravel bike that speaks to you, you’ll know quickly.

A test ride is important for evaluating fit — after all, it should feel comfortable, something that you could ride all day. A test will also let you pick up on any spec issues. Not sure what a 1x drivetrain feels like? Get out on one. Not sure if 650b wheels are for you? Test ride — you’ll know quickly.

Now we’ve gone through the process of picking a gravel bike, let’s look at a few case studies. We’ve created a few fictional riders and will pick a bike for them.

Ok so this rider is actually our Freewheeling Podcast host Abby Mickey. She was a pro roadie for years. She also raced mountain bikes, but hasn’t touched them much lately. She didn’t think she liked gravel, then she tried it, and now she loves it.

Abby will spend most of her time riding the relatively smooth dirt roads outside town, but will occasionally head up into the mountains for slightly rougher terrain. She likes to go fast, and if she wants to ride singletrack, she’ll get out her mountain bike.

Because she likes road bikes, she should look for a gravel bike with familiar geometry. That means a trail figure around 65 mm, and relatively long chainstays for stability. She should get a bike with a 2x drivetrain and 35-40 mm tires. She doesn’t really need a clutched rear derailleur.

The rider: Mountain biker looking to put in the hours on dirt roads

Ed is a good mountain biker. He has a trail bike, which is super fun on rough trails but sucks on smooth dirt roads or pavement. He wants a bike to explore on that will let him duck into easy singletrack on occasion.

Ed needs geometry closer to a mountain bike. Something more upright, with a longer trail figure. Short chainstays would be a plus so he can throw the back end of the bike around.

He probably wants a 1x drivetrain, which is what he’s used to. He definitely needs a clutch rear derailleur, whether he goes 1x or 2x. And he needs good wheels, because they’re going to get a thrashing.

The rider: Mostly commuting on dirt paths and pavement

Cathy the commuter isn’t too worried about tire size, because she’s mostly riding smooth trails and pavement. A 35 mm tire will be plenty. She doesn’t need a clutch derailleur. She probably wants a 2x drivetrain, though a 1x might be nice for the simplicity.

Most of all, she wants tons of mounts for fenders and racks. And because this bike will see all sorts of weather, and get locked up outside occasionally, it can’t be super expensive.

You’ll notice that we didn’t dig into frame material here. That’s because frame material selection, in the gravel bike world, is largely just a function of price and weight. You can get perfectly capable gravel bikes in aluminum, titanium, steel, or carbon, and from $1,000 to as much as you want to spend.

In fact, if this Field Test taught us anything, it’s that the latest crop of aluminum gravel bikes are fantastic. With 40 mm of rubber underneath you, ride quality from the frame itself becomes far less important, and the average rider would struggle to tell whether they were on pricey carbon or cheaper aluminum without looking down.

There are many other considerations too, of course. Do you want a direct-to-consumer bike, like a Canyon? That might depend on how confident you are fitting yourself and picking a bike without riding it. What about bars and stems and such? Our advice is to focus on the width and flare you want (wider for the mountain bikers, narrower for the roadies), but also keep in mind that these can be easily swapped.

Picking the right gravel bike for you can be part of the fun. Just remember, be honest about what you’ll ride the bike on, and what type of rider you are. Without that, you’ll end up with the wrong bike.