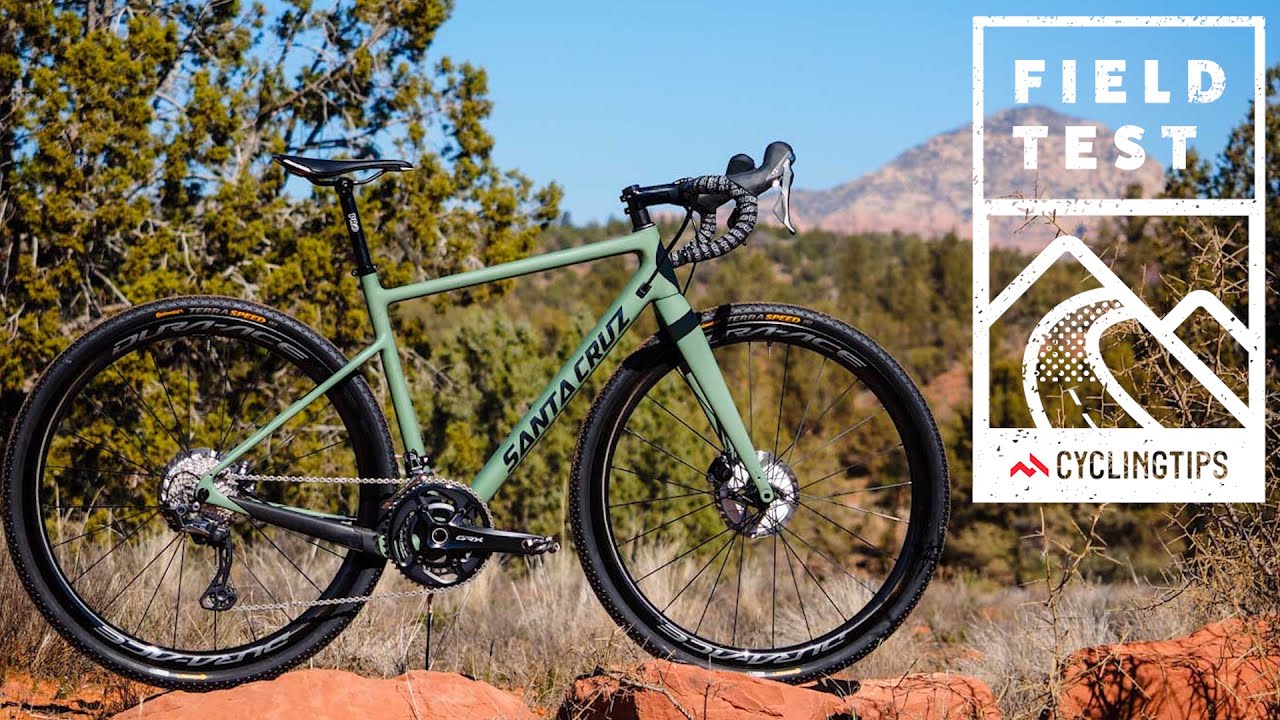 Santa Cruz apparently had a crystal ball when it introduced the original Stigmata in 2007. Although billed as a cyclocross bike at the time, its more generous tire clearance and longer-and-lower geometry basically made it a gravel bike — just more than 10 years or so before we were actually using that label. The third-generation Stigmata is now made of carbon fiber instead of aluminum, and while it’s still an excellent interpretation of the genre with lots of versatility and fun on tap, it’s not quite the groundbreaker that it once was.

The original Stigmata was a TIG-welded aluminum model introduced in 2007 as a sort-of mountain biker’s cyclocross bike. As compared to the contemporary norm, it had a bit more tire clearance (700×35 mm) and more bottom bracket drop (73 mm). It was also fairly long overall, and generally delivered more stable handling than the ultra-agile feel that is often favored in ‘cross.

When the second-generation model debuted in 2011 in carbon fiber form, it reversed course and went more traditional (in terms of ‘cross bikes, at least). The bottom bracket rose by a significant 5 mm, the reach grew longer for a more stretched-out rider position, and the chainstays shrunk by about the same amount, with all three of those moves intended to make the Stigmata a little more race-ready. That said, the wheelbase also grew longer overall, the stack crept a bit taller, and tire clearance grew to an even more generous 700×41 mm.

Although both bikes were billed more as cyclocross machines, the benefit of 20/20 hindsight tells us that they were essentially precursors to the “gravel bike” — there just wasn’t a handy marketing descriptor to use at the time. And perhaps not surprisingly, the second-generation bike, in particular, was used far more often in the real world as a versatile 700c exploration machine than for hopping barriers, just as is the case for modern gravel bikes.

With this third-generation model, Santa Cruz can now fully embrace what the Stigmata was arguably always meant to be — a gravel bike.

As with any gravel bike, the new Stigmata can certainly be used happily on a ‘cross course, but that’s not what’s it’s really about. Tire clearance has increased yet again — it’ll now handle 700c tires up to 45 mm-wide or 650b ones up to 53 mm-wide — the fit moves back a bit more into the relaxed realm with a taller stack and shorter reach across the size range, and the ride quality has softened for a more comfortable ride on long days in the saddle (at least according to Santa Cruz). Standover height has increased, too — another sign that Santa Cruz is more overtly embracing the Stigmata’s gravel intentions instead of pegging it as a do-it-all ‘cross rig.

Front-end handling characteristics remain unchanged for the most part, meaning they’re still quite middle-of-the-road as far as modern gravel bikes are concerned with about 69 mm of trail: not too quick, not too stable. That said, Santa Cruz has stepped up this time around by using two distinct fork rakes across the size range, instead of sharing just one, in order to keep the desired handling characteristics consistent for all rider sizes. In terms of mounts, Santa Cruz is keeping with the times by adding a third bottle location underneath the down tube (to go along with the usual pair inside the main triangle), as well as discreet fender mounts front and rear. There are no mounts on the fork blades, though, nor holes in the top tube for a feed bag.

Other updates include a switch back to a threaded bottom bracket and newly internal cable routing. Carrying over are compatibility with both 1x and 2x drivetrains (with a slick custom aluminum front derailleur clamp that can be removed for a clean appearance).

Overall, this third-generation Stigmata is more refined and more grown-up compared to its predecessors. And between the subdued color options offered under the Santa Cruz brand, and the decidedly snazzier-looking (but otherwise functionally identical) version that flies under Santa Cruz’s women-specific Juliana flag, few would argue that the new bikes look fantastic. And despite its move further into the gravel realm, the Stigmata is still quite light with a claimed frameset weight (frame plus fork, 56 cm) of just 1,600 g.

The particular bike we tested was a bit of an outlier, having arrived from Shimano as something of a showcase for its new GRX groupset, and outfitted with a full suite of in-house parts that included PRO aluminum cockpit components and a pair of very blingy Dura-Ace deep-section carbon clincher wheels. Total weight as supplied was an impressive 8.57 kg (18.89 lb, without pedals, size 52 cm), but the stock GRX 800 build would likely tack on another couple hundred grams.

You could easily make the argument that the previous Stigmata models were outliers relative to their more conventional cyclocross brethren. But because the changes on this third-generation model are more incremental than monumental — and because the gravel market around it has developed very rapidly in recent years — you could also argue that the new Stigmata stands out less among the crowd than it once did.

It’s still a great bike, but it also feels a bit less special than before.

First and foremost, the Stigmata truly seems to be everything it’s made out to be. It’s responsive and snappy under power. Its handling is nimble when needed, but also sufficiently stable when things get hairy (although on the broad continuum of gravel bike handling, it still falls closer to the quick end than the stable one).

While it doesn’t handle big hits quite as capably as some other gravel bikes we tested at Field Test (the Salsa Warbird comes to mind, for example), it does an excellent job of squelching the vibration and smaller impacts that are more likely to contribute to fatigue on longer rides. And given that our particular test bike was fitted with an aluminum seatpost, there’s room to improve on that aspect, too.

It feels as light as it is on the scale, its classy looks match its premium pricing, and the available tire clearance should more than suffice for how most people actually ride gravel bikes these days. There’s some toe overlap with our 40 mm-wide Continental Terra Speed control tires fitted, but not an unusual amount for the segment.

As you’d hope from a bike and company with this sort of history, the Stigmata is also thoroughly refined, and not just in terms of the ride and handling characteristics described above. It’s quiet and composed with none of the rattling that accompanied some of the other bikes we tested. The paint held up well against all the little rocks that were kicked up by the front wheel.

The seatpost slides in and out of the seat tube without leaving any unsightly scratches (and thankfully secures with a totally normal aluminum clamp), and the bottom bracket cups thread into the shell by hand without any grittiness. It’s easy to adjust the brake calipers so that the pads don’t rub.

While the lack of feed bag mounts on the top tube may be viewed as a bummer to some, the reality is that those things — almost without fail — rub against our legs far more often than we’d like, so none of us really missed them. There’s no shelf behind the bottom bracket on which mud can accumulate.

In short, it’s a gravel bike that neither fellow tech editor Dave Rome nor I would hesitate to add to our personal fleets.

So why weren’t we more excited about it?

“Overall this bike is pretty simple and with safe numbers,” Dave said. “The ride quality and handling had me feeling right at home, and it’s a bike that I was comfortable to push hard from the get-go. I enjoyed my time on it, but this bike feels like it could be any brand’s gravel bike.”

As was the case with every bike we had on hand at Field Test that arrived with Shimano’s GRX gravel-specific groupset, the components on this Santa Cruz Stigmata were a perfect fit with the bike in the sense that they did their job without fuss or fail. In essence, GRX 800 is the gravel equivalent of Shimano Ultegra on the road.

Shifts are smooth and precise, and feel remarkably refined for a “first-year” product. The disc brakes bite with reassuring power, and while they’re a touch grabbier than what you get from SRAM, it’s hardly a deal breaker. In dry conditions, at least, they also run very quietly.

The hoods are comfortable to hold with or without gloves, and the pronounced texture is a boon on rough ground or when your hands are wet. And the clever brake lever blade shape really does fit better in your fingers than Shimano’s road-specific models, which makes me wonder if Shimano might eventually carry it over to 105, Ultegra, and Dura-Ace, too.

Say what you will about the 2x drivetrain Shimano provided here; everyone will have their opinions on how many chainrings is the “correct” number. That said, the 48/31T chainrings and 11-32T cassette that were used here provided me and Dave with enough range to keep us happy on both faster road sections and slower bits of chunky singletrack, and the clutched rear derailleur kept things quiet and secure.

Perhaps more importantly, there are other options available if that sort of setup doesn’t suit you. Santa Cruz specs an 11-34T cassette on its GRX build, for example, and if you just want more total range, there are several SRAM groupsets from which to choose.

And those wheels? Well, you could say they were akin to cheating given how light they were, but in all honesty, they don’t matter a ton when it comes to overall ride quality. And to be totally frank, I would have been happier with rims that had more space in between the bead hooks, anyway.

Being devoid of flaws is hardly a bad thing

I’m not sure I entirely agree with his statement, but I do agree with Dave that the Stigmata — for all its storied history and the added glitter of that Santa Cruz label — is a very safe choice in this crowded market. It’s a manual-transmission Honda Accord Sport: practical, reliable, understated, and more entertaining than its looks might suggest to the uninformed. But just because it is all of those things doesn’t also mean that it isn’t a lot of fun when you get the chance to let it loose, too.

Some might call it boring, sure. But others might call it smart, and which one of those is more correct to you will invariably depend on your perspective.