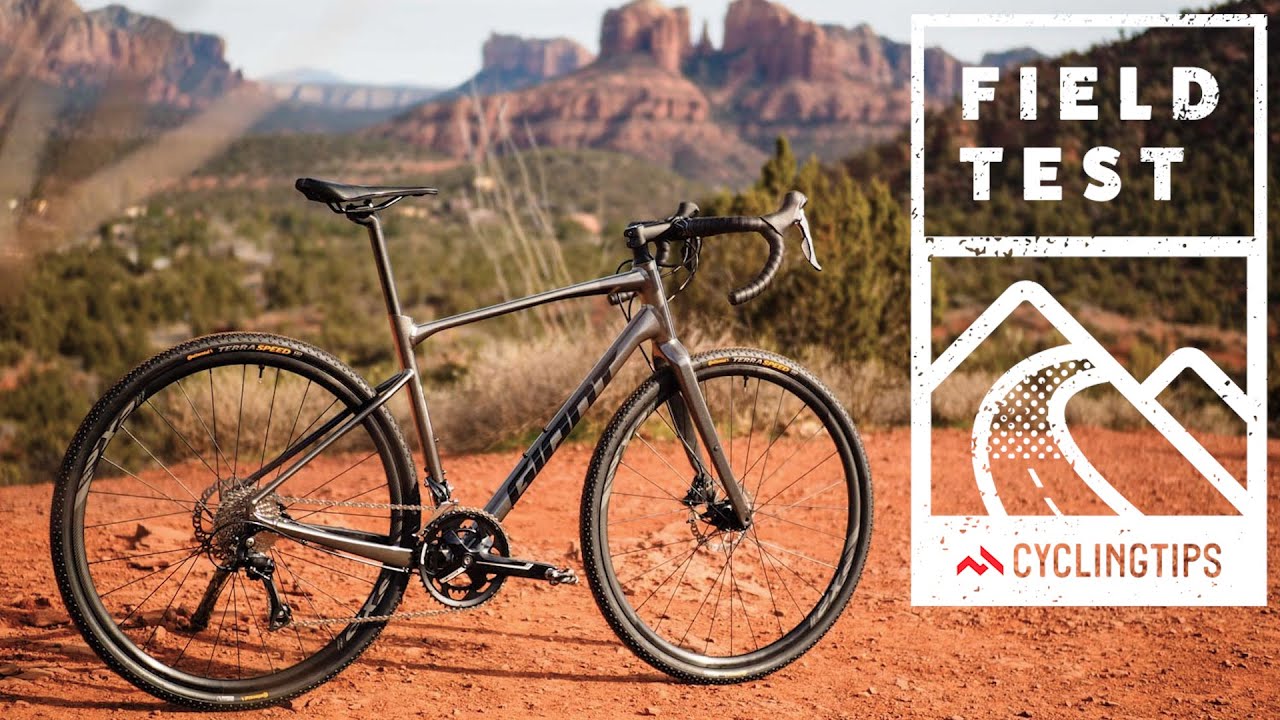 A simple bike does not have to be a bad bike. In fact, the opposite is often true. This is the takeaway from our time with the Revolt 2 – it doesn’t try to be something it’s not, and it succeeds in being exactly what many riders need.

The Revolt is built around an aluminum frame. It uses single-butted 6061 tubes, which is another way of saying it’s not particularly light. It feels heavier and softer than some of the pricier aluminum bikes in this test – in particular the Canyon Grail AL and Marin Gestalt X10, both of which use higher-end, triple-butted tubesets. It’s also hundreds of dollars cheaper than both of those.

Giant did include a few nice features found on its more expensive models, like a tapered 1 1/4” to 1 1/8” steerer, which keeps the front end feeling solid, and the D-Fuse shaped seat post, which adds a welcome bit of flex out back. The aluminum post doesn’t give as much as a carbon post would but, again, that’s what you get for $1,000.

More important to ride comfort is the Revolt’s ability to take a 700×45 mm tire. That’s in line with the best modern gravel bikes, and gives riders the option of running a fat, low-pressure tire to take the edge off bad surfaces.

Giant takes few chances here. The geometry figures, when taken as a whole, point to a gravel bike that prioritizes stability, but not excessively so.

Wheelbase and chainstay length are likewise on the longer, more stable end of the spectrum. Chainstays are 430 mm across sizes, which seems to be the length that many companies are settling on these days. It provides plenty of tire clearance without altering of the seat tube/BB area, is short enough to keep the bike snappy, but long enough to inspire confidence when things get loose.

The riding position is about as upright as most endurance road bikes. Compare our medium test Revolt to a medium Trek Checkpoint, for example, and you end up with nearly identical reach figures, but 5 mm more stack.

Riders coming off an endurance road bike will feel at home quickly.

Giant opted for predictability and reliability over surprise and excitement, and you’re reminded of this with every swooping corner or hard pedal stroke.

It’s not that the Revolt’s handling is bad. It’s fine. The bike goes where you point it and accelerates when you ask it to. But everything feels a bit muted.

The geometry isn’t unusual, so that’s an unlikely culprit. Perhaps it’s the single-butted frame that’s to blame, but I think the most likely problem is simply weight. The math shows us that weight doesn’t really affect speed all that much, but it unquestionably affects feel. Heavy, spinning rims are difficult to send in a different direction, and you feel that every time you flick the bike back and forth out of the saddle. It makes the bike feel slower, even when the actual difference is marginal.

The Revolt simply wasn’t as playful as bikes like the Marin Gestalt and Canyon Grail.

The good news is that the Revolt is more comfortable than those bikes, which are far more expensive. The D-shaped seatpost really does work.

Sora, one of Shimano’s cheapest drivetrain options, is surprisingly good. Or maybe that’s not surprising; it’s Shimano after all. The materials used are certainly heavier and of lower quality than more expensive groups, but the touch points – the actual feel of the group – isn’t too far off 105 or even Ultegra. Rear shift actuation feels virtually identical to more expensive groups.

The Sora group only provides nine gears out back — two less than more expensive groupsets — but we all rode 2×9 drivetrains for a long time without issue. The 11×34 cassette provides plenty of range.

There’s no clutch on the rear derailleur. This is a bummer if you’re going to be taking the Revolt on rough trails, but it’s not really necessary for most gravel riding.

Giant subbed in an affordable FSA Vero Pro crankset with 48/32-tooth chainrings. Shift quality doesn’t suffer much, and the chainring sizes are spot on for a modern gravel bike. The FSA crankset saves a bit of cash and doesn’t do any real harm. Those cranks are attached to a square taper bottom bracket, which is a fun blast from the past. The Giant website says this is a MegaExo pressfit BB – it is not.

Those Sora levers are mechanical – they pull a brake cable. But that cable doesn’t go all the way to a brake caliper. It goes into a small box on the handlebars and pulls on a cable-actuated master cylinder, which then actuates a hydraulic brake caliper. Giant calls the system Conduct.

In other words, the Conduct brake system takes a mechanical lever and turns it into a hydraulic brake. It works better than any mechanical system we’ve used, but not as well as a fully hydraulic system. Given the price point this bike was trying to hit, it’s a great bit of tech. Our biggest issue with the Marin Gestalt X10, which is $300 more expensive, was its mechanical discs and the huge amount of hand strength they required to work.

You are limited to Giant stems, which isn’t great.

Another bright spot in the spec is Giant’s SX-2 disc wheel set. This was the only budget bike in our Field Test to arrive already set up tubeless, and when we swapped to our control tires we were able to inflate them with a floor pump. They’re not the lightest, but seem well built and are wide enough to give a fat gravel tire a nice shape.

Any gravel bike in this price range is likely to be used for all sorts of different types of riding, from gravel to commuting to bikepacking. So it needs the mounts to match. The Revolt is slightly lacking on this front – it does have hidden mounts for racks and fenders, but lacks a top tube mount or any extra mounts on the fork. Giant hits the bare minimum here.

You can’t blame Giant for deciding not to take any chances with a gravel bike at this price point, but that does make the Revolt 2 somewhat hard to love. It’s the Toyota Camry of budget gravel bikes. Completely reliable, functional, and predictable, but without a single feature that would really make you want it.

Contrast that with something like the Marin Gestalt X10, the Reliant Robin of budget gravel bikes. The Gestalt is aimed at a very particular type of rider, and that rider will love it. The Revolt wants to be liked, not loved.

Still, what Giant has done here for just $1,000 is impressive. The Revolt is every bit as capable as gravel bikes two or three times more expensive, because Giant got the key spec decisions right. It can run tubeless tires, it has functional brakes. The success or failure of a bike at this price comes down almost entirely to the parts hanging off the frame, and on this front, Giant succeeded.