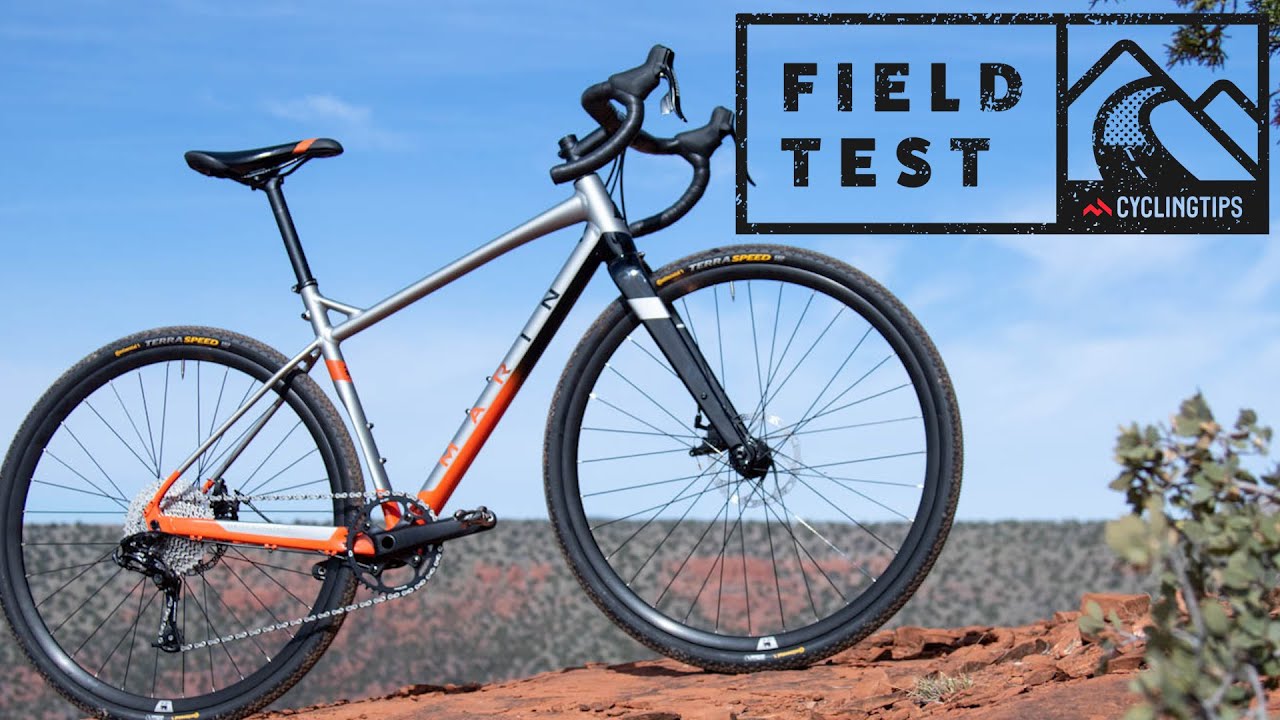 The Marin Gestalt X10 is a mountain biker’s gravel bike. It’s fun and flickable, aware that a bit of instability can be enjoyable, and designed for a rider whose range of terrain is almost wide enough to necessitate flat bars and suspension.

That makes it something of a love-it or hate-it bike. It’s not traditional. It’s not for everyone. But if it’s for you, it’s an impressively affordable way to put a smile on your face.

Lots of the gravel bikes in our Field Test don’t take many chances; they’re basically road bikes with more tire clearance, and they ride like it. The Gestalt steps outside that box.

I’ll dive into the geometry details below, but here’s the big picture: Marin decided that a shorter, more upright, more agile, more playful gravel bike is more fun than a long, stable, road-like gravel bike. I think they’re right. But the use case for this sort of bike is unquestionably narrower. It will appeal to fewer riders.

We wrote a story recently on how to choose a gravel bike. Step 1, ahead of everything, is to be very honest about the terrain you’ll ride and the type of rider you are. This is key with the Marin. It will be an absolute blast for the right person. It’s not the right bike for many others.

So who is the Gestalt X10 for? Maybe the easiest way to answer that question is to describe what I see as the perfect ride on this bike.

Out your door, you spend half an hour on pavement before hitting a dirt road out of town. You spend another 30 minutes climbing on smooth dirt, then spot a bit of singletrack off to the left. You dive into it. It loops around, twisting and flowing through the woods. The surface is relatively smooth – almost as fast on a gravel bike as it would be on a cross country hardtail. It pops you out at another dirt road, which you ride for another 20 minutes before descending on pavement back down to town.

This is the paradox of gravel bikes that borrow design and geometry from mountain bikes. The closer a gravel bike gets to a real mountain bike, the greater the argument for simply getting a mountain bike, which will always be far more capable on actual trails.

However, a mountain bike will feel annoyingly slow on the road and groad on either end of the singletrack. And that’s why I think bikes like the Gestalt have a place: They’re super fun on easy singletrack (in fact, they can be more fun than a mountain bike due to the added technical challenge), and they are far better on the way to and from the trailhead.

I loved this bike. It wags its playful tail like a happy puppy on trails and it’s still fast on roads and mellow gravel. It loves getting in over its head. It’s not great at anything but it’s fun to ride everywhere.

But how does it ride on … gravel?

Hmm, good point. Thus far, I’ve mostly discussed how fun it is on singletrack, which kind of makes this a review of a very bad mountain bike.

It does not provide a solid, planted feel on gravel. The longer, lower, more stable bikes in this Field Test (like the Canyon Grail AL, Trek Checkpoint, and Santa Cruz Stigmata) are generally easier to ride on mellow gravel and dirt roads. They require less attention and leave more room for error. That doesn’t mean they’re more enjoyable than the Marin, just that they’re more anchored.

The Gestalt isn’t bad on nicer surfaces. It’s plenty stiff, and though it’s not particularly light, it doesn’t feel dead or heavy in corners or when accelerating.

The steering geometry is quite neutral for a gravel bike. So though the short chainstays do make it marginally less stable on loose surfaces at high speed, it rails paved or firm dirt corners as well as anything we tested in Sedona.

The Marin Gestalt’s personality is all down to its geometry. Marin describes it as “Beyond Road” geometry – basically, borrowing a few things from the mountain bike world to make the bike more playful without ruining the ride on smooth surfaces.

The most immediately obvious “Beyond Road” adjustment is the incredibly short chainstays – 415 mm across all sizes. Normally, chainstay length is one of those secondary figures that makes a difference but is somewhat difficult to notice. But when you tuck the rear wheel that close to the seat tube, the result is dramatic: You make a wheelie machine.

Those short chainstays combine with an upright position – tall stack – and relatively compact reach figures to create a feel that is a closer to a trail bike than a road bike. Add in a 73.5-degree seat tube angle — steep for gravel bikes — and you have another nod toward mountain bike geometry.

Marin made a few other geometry tweaks as well, though most are comparatively conservative. The front-center is a tiny bit longer than normal, but not nearly as long as the progressive gravel bikes designed like the BMC URS. Head angle is a pretty standard 71 degrees on the 54 cm frame we tested, which with 50 mm of fork offset and our 40 mm control tires results in a trail figure just under 70. Again, that’s on the long end of the spectrum but isn’t abnormal (like, for example, the Evil Chamois Hagar.)

Let’s talk about the bad before we get to the good. First, a reminder that this bike costs US$1,300. Corners are going to be cut. There’s simply no way around that.

The brakes, Tektro MD-C500 dual piston mechanical discs, are not good. They are so not good that my fellow tester, Abby Mickey, ran this bike into the back of my truck while we were filming.

It had been a while since I last rode mechanical discs, so I had forgotten how bad they are. Compared to a good hydraulic brake, they’re more of a suggestion than a command. I bedded them in properly, they were adjusted by a professional mechanic, and they were still bad. And the Tektros are some of the best mechanical brakes available.

Moral of the story: Don’t get mechanical discs if you can help it.

The problem with this brake spec on the Gestalt X10 is that upgrading is going to require new brakes and brake levers. That’s not cheap. The next level up, the X11, has hydraulics and adds a dropper post but costs $900 more.

The rest of the X10’s spec is pretty good. It uses a 1x drivetrain, which is a good match for the bike’s personality (those mountain bike vibes), in the form of SRAM GX rear derailleur and Apex levers. It’s a 1×10, not a 1×11, but that doesn’t really matter. You miss out on the 10-tooth cog of more expensive SRAM 1x drivetrains, but again, that doesn’t really matter. The front chainring has 42 teeth, as does the largest cog out back, giving you a 1:1 low gear, which will be plenty for most riders.

The GX rear derailleur comes from SRAM’s mountain bike line and, as such, has a clutch to improve chain retention and reduce chain slap.

The Gestalt won’t take a front derailleur, so you’re stuck with 1x. Make sure that’s what you want before you buy.

The wheels use Marin-branded aluminum rims with 19 mm internal width. They don’t have a rim shelf like most tubeless wheels, so we didn’t set them up tubeless. Marin insists they are indeed tubeless compatible, though.

The bar and stem are aluminum, again Marin branded. There is absolutely nothing wrong with either of them. The bars have a modest, 12-degree flare that’s quite nice on the wrists.

Same goes for the 27.2 mm seatpost. It’s aluminum as well, and this would be a good place to get some extra comfort out of a carbon post, if you wanted to upgrade.

The stock tires are WTB Riddler Comps, in 700×37 mm. They’re a great tire, but this is the cheap OEM version with a wire bead. Probably worth replacing at some point, and definitely if you’re going tubeless.

The frame is 650b compatible, and will take a 47 mm tire if you make that swap. We didn’t test the Gestalt with a 650b setup, but I have a suspicion that a 650×47 mm tire setup would make it even better.

Mounts are adequate – you can add racks and fenders, which is the bare minimum for a gravel bike these days.

I expect to be somewhat in the minority in my love for the Marin Gestalt, and for mountain-bikey gravel bikes in general. I certainly was among our Field Test testers. For Abby, the bad brakes were a deal-breaker. For Dave Rome, the BMC URS is a more compelling case for borrowed mountain bike geometry. For James, well, I think James always thinks I’m an idiot.

They all make good points, particularly James. But the first ride on the Gestalt was genuinely the most fun I had on any bike in Sedona. It was enjoyable on the paved ride to the trails – fast and stiff, hiding its weight well – and those short chainstays and relatively slack front end ate up singletrack in a way other bikes in the Field Test did not.