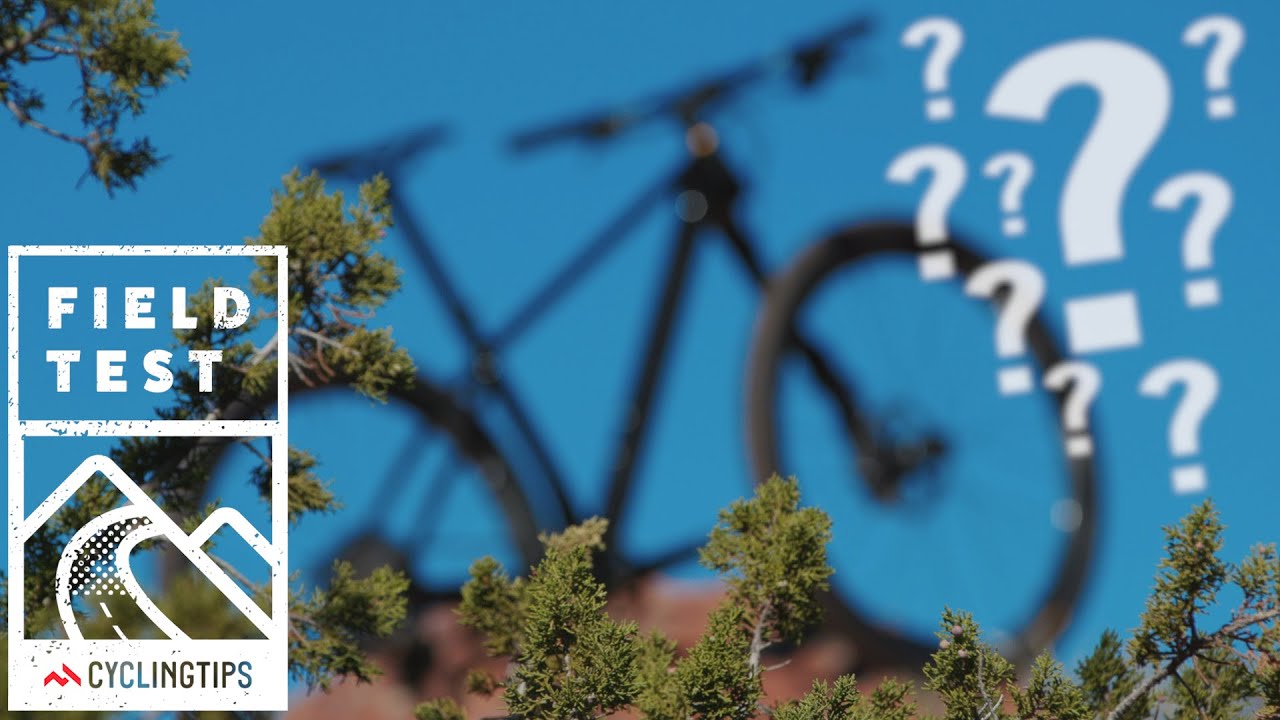 So often we joke that gravel bikes are just old mountain bikes from a time that’s now in the rearview mirror. And really, a look at the latest geometry, tyre widths and technology to hit the gravel riding world don’t help to make that joke any less true.

These are questions we’ve pondered as gravel bikes have risen in popularity, and something we wanted to answer while at our inaugural Field Test in Sedona, Arizona.

To add to the 12 gravel bikes we tested, we brought along what’s arguably the nicest and most efficient hardtail mountain bike money can buy: an Unno Aora. At 8.9 kg and more than double the price of any gravel bike we tested, if there was ever a mountain bike to outshine a gravel bike on its home turf, this was it.

Your terrain is everything, and so is speed

Gravel bikes have grown in popularity for their ability to mimic the efficiency of a road bike while adding versatility for where they can be ridden. There is, however, a tipping point for where a hardtail may become the wiser, and an even more versatile choice, and all that depends on the terrain you wish to tackle.

As previously covered in our grading gravel feature, not all-terrain – or even people’s perception of that terrain – is equal. Terrain that one person might be happy tackling on a road bike may see another wishing for a dual-suspension mountain bike. Similarly, more skilled riders or those coming from mountain bike backgrounds can find true joy in rediscovering old trails on a less-capable bike. Clearly there’s a lot of ambiguity in this topic.

Still, what’s obvious is that most gravel bikes are at their best on terrain that sits between a two to four on our gravel scale. A gravel bike will of course still allow you to conquer terrain that sits at either extreme of our scale, but arguably it’ll need a change of tyres or wheelset in order to excel at one or the other.

On the other side, mountain bike terrain has only gotten more challenging over the years, and bikes have progressed to keep pace with this. In turn, a mountain bike suitable to many tailored trail networks can make riding simpler terrain, such as gravel roads, rather dull and slow-feeling.

Which leads me to a conversation about average speed, perhaps the best metric in deciding whether a gravel bike, or mountain bike, is right for you. Simply, the rougher the terrain you wish to ride, the lower your average speed will likely be, and at a point, a mountain bike will become the better pick.

Gravel is faster than trail

Maintaining an average speed of 25 km/h (15.5 mph) on a mountain bike, over rocky and technical terrain, would put you in a very elite category. Meanwhile, most recreational groups on a Saturday morning road ride have no problems holding that same speed. And it’s this stark difference in speed that has perhaps helped define the design differences between modern gravel and mountain bikes.

Not unlike a road bike, a gravel bike prioritises pedalling efficiency with the assumption that the wheels will roll over the terrain they’re pointing at. While a modern mountain bike puts the rider in a position that more easily allows the maneuverability of those wheels: a higher front end and rearward weight distribution mean the front wheel is easier to loft over obstacles, while the hand position of a flat bar is more favourable for fighting a front wheel that’s being bumped offline.

The difference in rider position can be huge, too. Broadly speaking, a gravel bike borrows from the road with an extended reach that has you pivot your hips. In turn, your glutes are more easily recruited to the task of pedalling, and so you can, in theory, pedal with greater efficiency. Meanwhile, that extended reach adds further efficiencies by reducing your body profile to the wind.

From there, a narrower drop handlebar further reduces your frontal profile compared to the wide flat handlebar of a mountain bike. The position of a mountain bike is fairly fixed, while a dropbar offers up multiple hand (and body) positions to help swap things up on longer rides.

The difference in intended terrain has seen mountain bikes become far more specialised in the gearing they feature, too. You’d be hard-pressed to buy a high-end mountain bike in 2020 that offers a front derailleur. Likewise, the single chainring they’re set up with assumes you’ll be conquering some incredibly steep and loose terrain at lower speeds, and not pedalling midpack in a road group. You can certainly add larger gearing to a mountain bike, but soon enough you’ll be limiting its ability to excel in its intended purpose.

If the subtle differences between riding position and gearing aren’t enough, then the argument of suspension is a topic that just hurts my head. I used to think that suspension was the defining line between gravel bikes and mountain bikes, but clearly, that’s no longer the case.

Rather, the freshly painted line on the dirt road is related to the amount of suspension. Modern mountain bikes rarely offer less than 100 mm of travel, while 50 mm is considered huge for gravel.

Clearly suspension is a good thing when you’re on rough terrain. It reduces the impact to your body, and makes a huge difference in helping to control the wheels – meaning more traction and the ability to hold the desired line. The 100 mm Cannondale Lefty fitted to the front of our Unno was a prime example of the control suspension adds, and where the front wheel would be bounced uncontrollably and dangerously through rocky sections while on a rigid gravel bike, the Unno just laughed it off and begged for more.

The issue with suspension is that it adds weight, complexity and cost to the bike. All of that is a worthwhile trade-off if you’re predominately riding off-road, but it becomes an obvious nuisance when it’s an unneeded feature.

A mountain bike suspension fork adds an easy kilogram compared to a common rigid alternative. Even as a best-case scenario, a short travel fork like the Lefty still gives up 900 g – and that’s with a significant price tag, too.

The complexity comes in the form of having to design the geometry around the additional height of a telescoping fork. There’s also complexity in preventing the suspension from soaking up rider energy over smooth terrain, something that’s often handled with a manual lockout switch. And complexity also comes with the addition of more moving components on the bike, meaning more places for things to go wrong and require servicing.

The suspension is only a part of the control and comfort package. The faster average speeds and tamer terrain of gravel riding also allow for slimmer knobbed tyres that offer reduced rolling resistance, improved aerodynamics and lower weight. Of course, the use of wider mountain-bike-like 650B tyres on gravel bikes completely confuses this argument, but equally, it helps to show why such tyres are not the ideal choice for riding extended sections of tarmac and smooth dirt. Simply put, the better your tyre choice is for off-road use, the worse it’ll perform on smooth terrain.

When we arrived in Sedona, Arizona with 12 gravel bikes, many in the know thought we were nuts. Sedona is known as a pretty rough and raw mountain bike destination, and the roads are clearly made for cars.

Sure, it’s not the ideal gravel riding destination, but it was the ideal gravel bike testing destination, encompassing a wide variety of terrain and proving the impressive versatility of gravel bikes. We found tarmac, gravel roads and even plenty of scenic trails that were all exceptionally enjoyable to ride with dropbars. Better yet, we could link up different types of terrain efficiently and still enjoy the connecting road elements. And clearly there’s plenty of enjoyment to be had by under-biking yourself on tamer trails.

By contrast, the fast and open terrain was slower and almost lame on our Unno Aora mountain bike, at least until the dedicated trails began. That said, I’d be lying if I didn’t lust after that mountain bike for the trails that surrounded our accommodation. And as long as there wasn’t far to go before hitting the trails, then the mountain bike was my preferred choice for exploring what the trails offered.

And that makes sense: a mountain bike is perfectly suited to a mountain bike destination. But a gravel bike is better suited to everywhere trails are not. Gravel bikes are in their element on endless unsealed and poorly kept roads where your average speed is closer to that of riding on tarmac.

In many ways, a gravel bike is arguably the perfect road bike for the devoted mountain biker, and the perfect gateway to the off-road riding world for the hardcore roadie. It gets these often-divided sides partying together and experiencing a new form of cycling.

Still, whether a gravel bike or hardtail is best for you will always depend on how and where you ride, and what matters most to you. I won’t pretend that a gravel bike is the better option for going fast on flowing singletrack, bombing a rough firetrail, or tackling a mountain bike marathon race. It’s not. Equally, if all I wanted to do was explore long lost roads, then I really wouldn’t want to be stuck on a hardtail that would make the terrain feel dull.

In the end, choice is a glorious thing. Pick what, how, and where you want to ride. Riding any kind of bike is always the right answer.