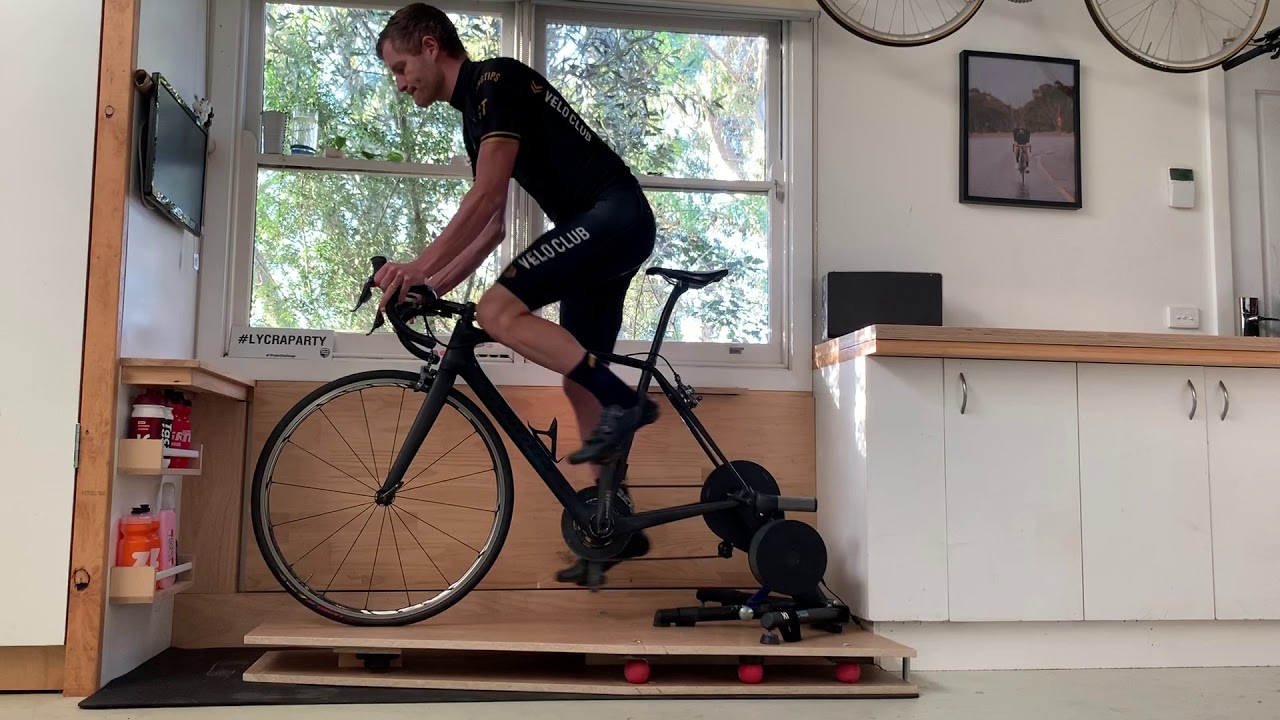 If you’ve done any amount of riding on an indoor trainer you’ll know there are some elements of outdoor riding it simply can’t replicate. The fresh air and being surrounded by nature for one, or the feeling of covering distance, or the natural rhythm of the bike beneath you. Outdoors the bike sways from side to side, particularly when you’re out of the saddle; on an indoor trainer, that lateral movement is significant reduced.

But there is a way you can fix that: with a rocker plate. And while you could spend more than $1,000 to get one from one of the big brands, why not build your own? That’s what CyclingTips’ community manager Andy van Bergen decided to do a week or so back. Here’s the story of how the project came together and what he learned along the way.

Like a large number of cyclists, I’ve found myself spending a lot more time on the trainer lately. While I’d much rather be riding outdoors, trainer sessions are accessible, efficient, and through Zwift, much more enjoyable. When I first started riding Zwift two years ago I found that the biggest obstacle was setting everything up. At that stage I would roll my bike into the laundry, shuffle everything around, set up the trainer, attach the bike, set up a stand for the iPad, grab a fan etc. etc.

It got to be such a pain that once the initial novelty wore off I found it was easier to skip the turbo session than go through the rigmarole of a lengthy setup process every day. I ended up converting a desk in my garage into my ‘Zwift notch’. The desk could fold down flat against the wall, allowing the trainer to be set up there permanently.

That project speaks more to my laziness than anything else, but that change made the biggest difference to how frequently I was riding the trainer.

The majority of the time I have a spare(ish) nine-speed alloy bike set up on the trainer, however with a 12-25 on a standard crankset it means that riding in the hills is only OK for short sessions. When I know I’m going to spend more time than a simple workout I tend to swap the bike over to my S-Works Tarmac. It has my favourite geometry, plus with the longer reach derailleur I can squeeze a 32-tooth cog on the back. Coupled with a compact crankset up front it makes for some pleasant spinning.

I’ve done some big Zwift rides over the last two years, including a 265 km effort with 10,000 metres of climbing over the Easter break (the fourth vEveresting that I’ve completed). While my Wahoo Kickr allows a (very) small amount of lateral flex, every time I swap over to a carbon bike I wonder about the potential damage to the frame due to the torsional flex. I like to think I have a fairly clean riding style but that can go out the window when the red mist descends, or when I’m grinding out a hill a few hours into a ride.

During the Easter break I was watching YouTuber Francis Cade complete a double Everesting (as ridiculous as it sounds, it is a thing — see video below). He had recently picked up a rocker plate for his trainer, and I was fascinated by the natural climbing sway it allowed him to replicate. Deep in the hurtbox he still managed to maintain a beautiful fluid style, and seeing that made every subsequent trainer ride I did feel stiff and jarring.

At its most basic, a rocker plate is designed to allow your trainer to pivot laterally. This allows the bike to sway underneath you as it does when you’re riding in the real world, particularly when you’re out of the saddle. There are a great number of rocker plates on the market in a wide variety of designs, ranging from the (very) expensive, through to CNC’d kits from people’s sheds. I had heard of people making rocker plates themselves using a relatively simple construction, so with nothing planned on the weekend I figured I’d give it a go myself.

I thought I might stumble across a design or two online but I was surprised to find literally dozens of different approaches. After digging through a bunch of videos I saw a link through to the Rocker Plates Facebook group. People in this group seemed to be building upon each other’s knowledge with countless permutations of a similar concept.

This looked like my kind of project: something without blueprints, that had very little data on real-life affects, and importantly, that involved the use of powertools. It sounded fun. I bounced around a couple of designs in our VeloClub Slack group, and with that initial feedback I felt like I had enough of an understanding of the concept that I could commit to a trip to the hardware store.

Here are the tools I used:

I was flipping between two designs for the central pivot, and figured I’d pick up the materials for both so I could test the differences. Either way, the design called for two sheets that could rock laterally through a central pivot.

I started by measuring up the bike on the trainer. I had settled on a design that incorporated both the trainer and front wheel. There are rocker plates that allow the front wheel to shift side to side on the floor with only the trainer on the plate, but I didn’t love that idea. With a basic ‘coffin’ shape selected I measured, marked, and cut the boards, clamping two at a time to ensure they were a perfect match.

With the top and bottom board ready, I next needed to decide how to pivot them. Now that I had the materials in front of me, I felt that a central hinge would provide a solid axis point, rather than the elastomers I had seen in a couple of different designs. Given I had selected flooring as my baseplate material I was concerned that a screwed-in elastomer would put too much pressure in one spot, and might eventually pull through the board. The hinges felt like they were going to spread the load.

Next was to determine how to mount the hinges, as they would need to provide a negative angle in both directions (as opposed to a door, for example, where the hinge can only provide that in one direction). There are saloon-style hinges that allow movement in both directions, but I wasn’t sure what the load would be like – plus they were much more expensive. I considered “Z-folding” the hinges, and if I had a way of tacking them together that’s what I probably would have done, but without access to my old man’s oxy torch I figured if I kept enough clearance above the hinge pivot it would allow negative movement in both directions.

I routed a small channel to flush-mount the hinges on the underside of the board (see image above right), and then mounted the hinges at 90 degrees to a slightly raised length of 2×4. I wanted enough height to allow enough movement (plus a buffer) but wanted to keep as much of the hinge on the 2×4 timber as possible. With a cup of (decaf) tea, a bit of head-scratching, and a little jig I was able to figure it out. I tacked in the top sheet, and it all seemed to work as expected, and as expected it took my weight.

With the pivot sorted, the next step was to look at the ‘cushion’ either side. The designs I had seen for this involved anything from tennis balls, to gym balls, to pool noodles, and rubber matting. I was pretty sure that the stacked rubber feet that go under a washing machine would do the job. These composite rubber squares had enough give that I could press into them with a bit of force from my hands, so I figured with the combined weight of a trainer, bike, and body it should be the right amount.

I allowed a 15 mm gap between the stacks, and used semi-rigid stabilising springs either side to ensure that any lean was initiated by the rider. It all seemed to work as expected when standing on the board, however once riding it all felt a little sloppy, and there was too much of a pronounced ‘end’ to the cushioning on either side. While it rocked nicely out of the saddle it still felt a bit buttery, and I was definitely having to engage a bit of core strength while seated.

It was time to try the ball method. The most common type of ball I had seen was a half inflated gym ball, which allowed adjustment by inflating them to different degrees. My local store didn’t have these in stock, so I settled on some firm rubber balls – with about the same consistency and give as a squash ball. The give of these didn’t seem to be greatly affected by the air inside, so with a pilot hole drilled I installed them onto a tightened bolt. Seeing as I still had the rubber mats I used these as the ‘pads’ the ball would sit between.

I added a couple loops of inch-wide velcro to attach the arms of the trainer to the board, to ensure I didn’t tip off the platform in the middle of an enthusiastic sprint. And with a final softening of the edges with a router and some sandpaper, version two of the rocker plate was ready. The result was a vast improvement. The addition of the rubber balls coupled with the springs cushioned the end of the most extreme movement, which meant the jarring bounce was removed. In the saddle the sway is there, but it’s subtle, and feels quite natural. Out of the saddle the smaller amount of swinging feels more lifelike and very comfortable.

For a fun weekend project it certainly ticked the boxes, and the result of this curiosity was far better than expected – to the point where I imagine it will be a permanent part of my setup. In all I spent between $60 and $80 on materials, and roughly six hours of work to pull it together.

Now that I have an understanding of the basics, I’m pretty keen to start from scratch and work on the aesthetics …