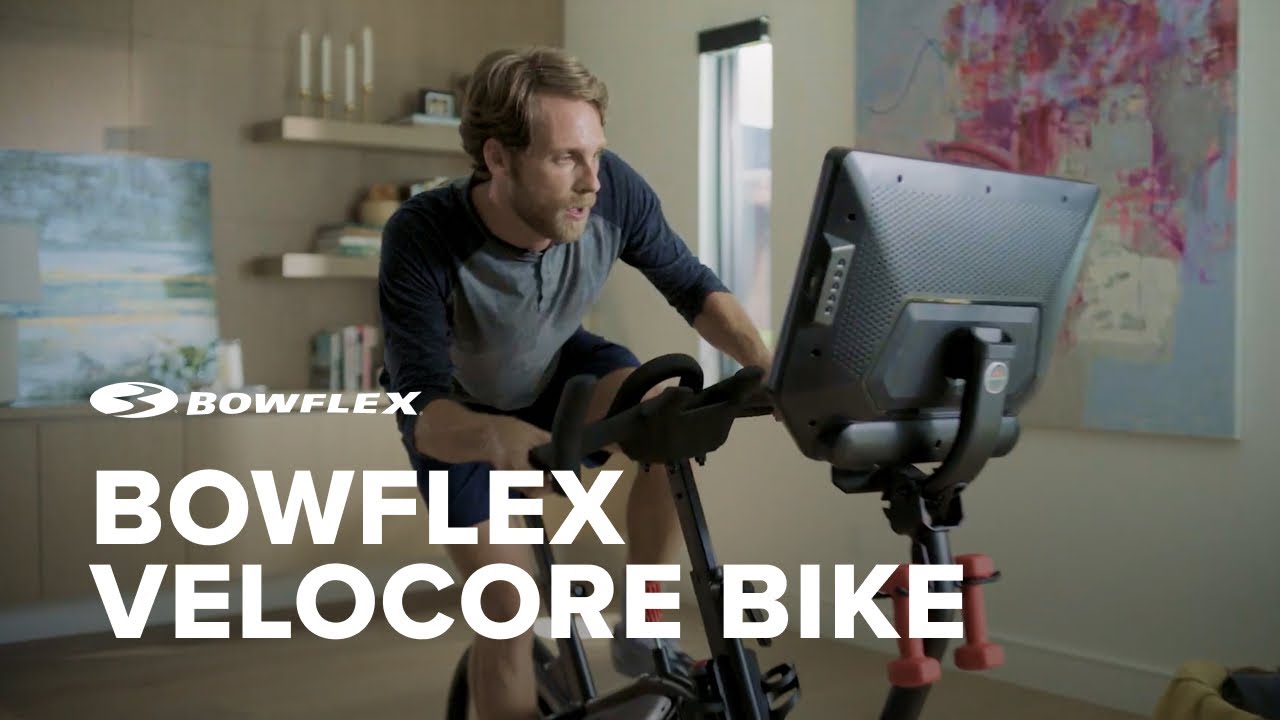 This tilting indoor bike will have you ‘crushing your A-game’, apparently

Indoors is the new outdoors, as anyone who’s followed the giddy proliferation of smart trainer options will know. And as people have taken their rides indoors – enjoying the efficiencies of targeted training, reduced risk, and the social element of virtual platforms – the hardware has been racing to keep up.

With the release of the Bowflex® VeloCore™ – the company’s “NEW (un)stationary bike that’ll have you hating us (and loving us) at the same time” – I think it’s fair to say that we’ve hit a peak. I’m not sure in what category, exactly, but something’s certainly at an all-time high.

At a glance, what we’re dealing with here is a brutalist collection of black and red angles, levers and knobs that looks a bit like most other indoor bikes from companies like Peloton, Wahoo, and Wattbike. But Bowflex has a trick up its sleeve.

The VeloCore, you see, has the unique selling proposition that you can tip it around like a MotoGP arcade game from the ‘90s. In the company’s promotional video (which you can see up the top of this article), a cast of wholesomely glistening young people do just that, over and over again, flinging themselves toward the floor with reckless abandon. It’s an eye-opening couple of minutes of footage, accompanied by one of the best voiceovers this side of 3am on the Shopping Network.

Now, you’ll correctly note that the Wahoos and Wattbikes of the world don’t tend to go for such carnal tricks in their advertising – and nor does Peloton, advertising blunders of its own notwithstanding.

But because indoor training is a massive growth area in the cycling industry and this bike is swaying haphazardly back and forth in the same space, let’s take a look at what the Bowflex VeloCore has to offer, according to this masterpiece of advertising.

Bowflex doesn’t waste much time getting to the hyperbole, saying that it “put[s] fire to everything you knew about indoor cycling”. It is “the indoor bike that’s anything but stationary”, which I guess also means that it is ‘yoghurt’ and ‘invisible’, along with infinite other possibilities. It is “wildly immersive”. It will “ignite your arms and shred your core”.

If those undemanding statements were too much for you to keep up with, Bowflex helpfully boils it down even further: “Simply put, it dares your body to be everything it was meant to be.”

Against this rousing barrage of Marketing™, an ethnically diverse cast of dewy twenty- and thirty-somethings lurch around their immaculate apartments, with looks ranging from cautious concern:

To whatever this is:

There is also a man who reaches between his legs and then makes this face.

I don’t think he got paid enough by his casting agency for this gig, but he’s my second favourite character in the ad, after Girl With Backwards Gingham Baseball Cap. Never change, you two crazy kids.

Exercise bikes are old news, but what everyone wants these days is Synergistic Integration and Amplified Connectitude. So let’s talk about that.

At the front of the bike, rising on a pole that doesn’t look even a little bit like an afterthought, is a screen that looks like a monitor bought in bulk from Dell. This console comes in two widths – 16” or 22” – and integrates into streaming platforms including “The Netflix”, Disney+ and more.

These integrations allow you to “binge shows and more … while crushing your A-game”, which is a collection of words that might mean something to you but doesn’t to me. “You supply the streaming subscription, we supply the magic,” Bowflex continues. (That magic does not include proofreading its app names, as the text below the Netflix button demonstrates.)

For an additional charge, users can access the JRNY™ Experience, which is a membership that seeks to compete with rival platforms like Peloton. This gives users access to more than 75 pre-loaded “trainer-led videos”, which sounds a lot like a worse version of Peloton without the interactivity. Bowflex disagrees, and throws some shade into the deal for good measure, saying that “loud trainers are a migraine. Our trainers breathe new life into your workouts … by not trying so hard.”

Also included for JRNY subscribers is Adaptive Workouts (“The fitter you get, the harder these babies get.”), Friendly Virtual Coaching (“Our clever coach has a whimsical way with words. You’re gonna like what you hear in the final stretch,” which certainly has my attention as CyclingTips’ Whimsy Correspondent), and Scenic Destinations (“Rock, move, and flex your way through the curves of scenic destinations around the planet!”).

Included in these scenic destinations, according to the company’s promotional video, is the popular hit real-world destination of ‘Shangri La, China’. At least Zwift has the decency to concede that Watopia is fictional …

On which note: it’d be cool if you could connect the bike to popular platforms like Zwift or Peloton, but you can only sort of do that – by using a different screen – and even then Zwift doesn’t list the VeloCore as a supported model. That also means that, lean as hard as you might, you won’t be able to steer in Zwift.

Neither Zwift or Peloton can operate in the console itself – which also isn’t capable of telling you how fast you’re going, or even how many watts you’re putting out (“Coming soon!”). Instead, rather than speed or power, Bowflex is mostly geared to things like calories burnt, which aren’t metrics that many cyclists will find all that appealing but might prove a hit with the home gym crowd:

So that’s the software, which I’m sure you’ll agree is a slam dunk. But wait, there’s more. Let’s take a closer look at the hardware, starting with the claim that “this puppy has bells and whistles. We’re talking 100 resistance levels … Yeah. There’s no such thing as muscle memory.”

Now, I don’t know what that last sentence means, in this context or otherwise, and I don’t for one second think the script’s copywriter does either. But I think we can both agree that Vinnie Voiceover sells it, whatever ‘it’ is.

Moving on. There are “six hand-position handlebars for everything to hold onto”, which feels awfully like something AI would say. There’s also an “adjustable seat for your back … and your ass”. Now, if I was being petty, this is where I’d suggest that Bowflex doesn’t know where a seat is supposed to go, but then they save it at the last minute. Because, reader, they clearly know what’s what.

There are two bottle cages – which for some reason Bowflex is at pains to point out can also be used to hold popcorn, as well as two bottles of water. Rounding out the package is the inclusion of a pair of “3lb [1.36 kg] dumbbells so you can hustle for that muscle.”

All told, there are so many things. Bluetooth speakers so you can annoy your neighbours! Multiple [two] riding styles! A shelf you can put your phone on! An armband!

Now, I don’t know if the bike’s good. It’s not available in Australia, for one, and the two minutes and 16 seconds of bombastic nonsense that is its advertisement doesn’t inspire me to want to check it out. And certainly not at US$1,699-$2,199, depending on screen size.

But there’s a line late in Bowflex’s own ad – “why settle for less than you deserve?” – that gets me thinking. And you know what? I think I deserve more.