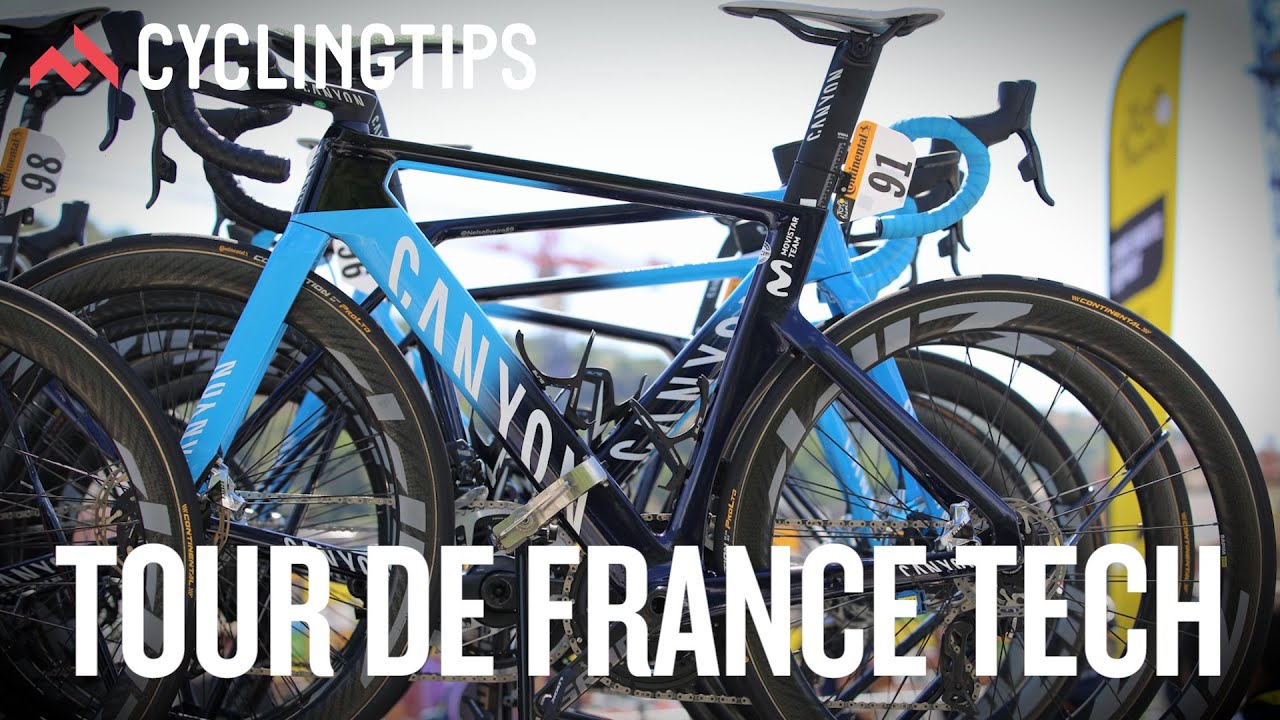 The third stage of this year’s Tour de France provided one of the closest looks yet at Canyon’s redesigned Aeroad aero road bike. Both Warren Barguil (Arkea-Samsic) and Alejandro Valverde (Movistar) are racing the as-yet-unannounced machine, and Canyon appears to have done its homework.

Canyon has maintained the overall profile of the existing Aeroad (including its nearly-level top tube, dropped seatstays, and shielded rear wheel) but has basically turned things up a notch everywhere else. This latest version features notably deeper truncated-airfoil tube profiles throughout for reduced aerodynamic drag, with the down tube, head tube, seat tube, seatstays, and — perhaps most dramatically — the seat post all displaying far more aggressive shapes than before. Cabling is now fully internal, too, with the lines all passing inside the brand-new, one-piece carbon fiber aero-profile cockpit before snaking their way into the top of the head tube.

Only disc-brake versions of the new Aeroad have been spotted so far, so it remains to be seen if Canyon will offer it in a rim-brake variant. That said, both the non-drive fork blade and rear dropout area display some intriguing shaping that presumably help smooth out the airflow in those areas.

Other details include the availability of multiple seat post head offsets, the same clever anti-rattle features in the down tube that Canyon has used on previous Aeroads, neatly integrated wedge-style binders for both the seat post and stem, and what looks to be the continuation of Canyon’s preferred PF86 press-fit bottom bracket format.

So what don’t we know yet?

At this point, it seems safe to say that Canyon isn’t likely to have altered the geometry very much, and while the company has yet to release any official information at all on the new Aeroad, the drastic increase in surface area makes it unlikely that it’ll be lighter than the outgoing version — if anything, it’s more probably that the bike has gotten slightly heavier, and more laser-focused on being an all-out aero machine, as opposed to more of an all-rounder. As such, tire clearance may have improved somewhat over the current version, but given where the Ultimate sits in Canyon’s lineup, expanding the versatility of the Aeroad probably didn’t sit very high on the priority list for this redesign.

Perhaps the biggest question, however, is when Canyon plans to do the full reveal. Typically, companies time announcements of new bikes that are being used at the Tour de France to closely coincide with the start of the race, but the German direct-to-consumer company has still uttered nary a peep, and with several stages already behind us, who knows when that announcement will come.

Hopefully it’ll be sooner than later, though.