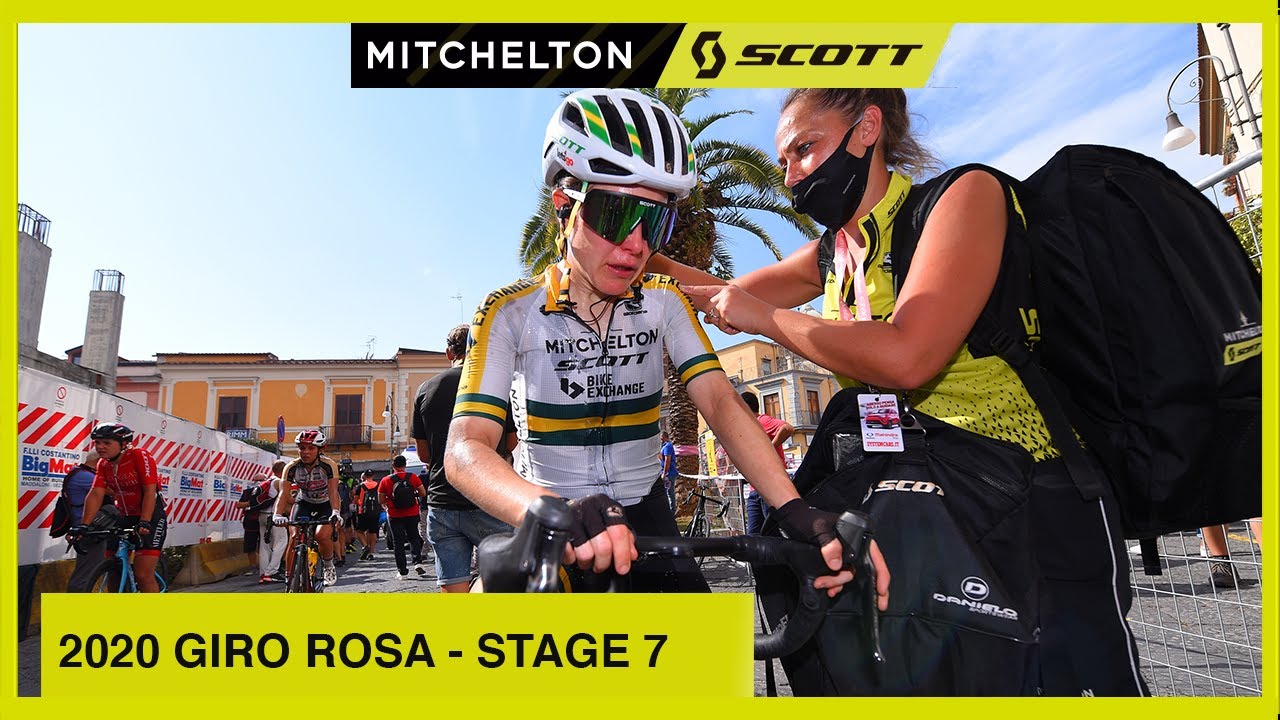 Video: Inside Mitchelton-Scott’s horror day at the Giro Rosa

The day had started out so well for Mitchelton-Scott. There’d been a spirited rendition of “Happy Birthday” for Amanda Spratt in the team hotel, there were laughs and jokes a-plenty in Nola as the riders readied themselves for action, and there was the promise of another great day in pink as stage 7 of the Giro Rosa began.

But when the stage ended in Maddaloni a little under three hours later, the mood in the Mitchelton-Scott camp was considerably more sombre.

Everything had been going great. With less than 10 km to go, as a reduced lead group crested the final climb, Mitchelton-Scott had overall leader Annemiek van Vleuten and Spratt in the mix. As the kilometres ticked down it looked as if the team was set to defend the maglia rosa for another day. But then, well inside the final kilometre, there was a touch of wheels in the lead group. Spratt and Van Vleuten were among those to crash, with both landing awkwardly on a nearby kerb.

“I was in a good position just going safe to the finish,” Van Vleuten recalls. “It was a good day for us, I was never in trouble, we were in control, I was having fun on the bike until the last 500 metres when the girls crashed in front of me and I couldn’t avoid them.

“I felt immediately it was not good with my wrist, because I saw that my wrist was not straight, so I knew straight away that was not good.”

Scans later confirmed that Van Vleuten had fractured her wrist, ending her Giro Rosa. “I will go home now and I will have an operation on my wrist on Saturday,” the world champion said.

Spratt is out of the race too, with concussion and a shoulder injury. So much for a happy birthday.

For Van Vleuten, the frustration of abandoning the race is two-fold. Not only was she just two days from a likely third-straight overall victory; she will now also miss the Road World Championships in Imola next weekend where she was a big favourite to win a second-straight rainbow jersey.

It’s not yet clear what Spratt’s injuries mean for her Worlds tilt. She’s medalled in the past two Worlds road races and was set to led the Australian team again.

As for the Giro Rosa, well, the race is suddenly on a knife edge. Kasia Niewiadoma (Canyon-SRAM) will lead the race on stage 8, but she is only 15 seconds clear of two-time former winner Anna van der Breggen (Boels-Dolmans). Cecilie Uttrup Ludwig (FDJ) is third at a further minute behind. With two stages remaining, both of which finish uphill, the race is far from over.

If you haven’t already, be sure to check out Mitchelton-Scott’s video from the team’s unfortunate stage 7 of the Giro Rosa. You can find the video at the top of this post. And if you want to read and watch more from the 2020 Giro Rosa, be sure to follow the link for the rest of our coverage.