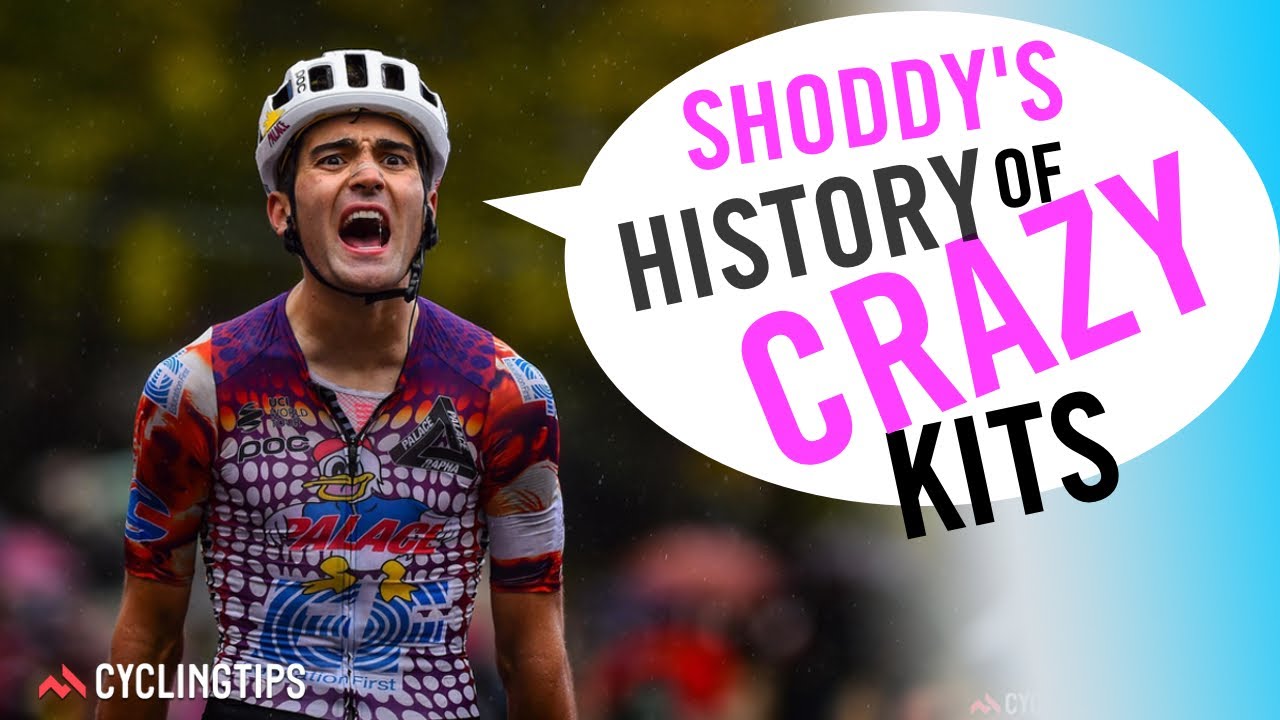 I thought I’d put a video together that looks back, pays homage, and roasts a few kits of old. The good, the bad, and the downright offensive.

Who among you managed to get their grubby (or not so grubby if you’ve been washing properly) mitts on a set of that wonderful, yes I said wonderful, EF/Palace kit?

Next question, which of you is making a small killing on eBay by selling it? If so, I can fully understand. That mortgage of yours will be paid off just that little sooner. Chapeau!

Let us be honest, trade team kits of late have been bloody dull. The past 10-15 years have seen all the character of the once colorful or some would argue garish kits stripped away. Sleek, clean, and muted team clothing at first crept in to the peloton then took over. More so in the men’s peloton than the women, or to be more accurate the men’s WorldTour teams.

I blame that rather large UK based clothing manufacture for this, as many do (it’s usually the old guard). They lead the way with swapping out the pantones of the ’80s and ’90s to a colour palette that didn’t burn the retinas. Slowly, most major brands and teams followed suit in some shape or form. And to be brutally honest I’ve always been a bit bitter about that, I’ve held a grudge. Feeling like they took something away from me like the peloton lost a bit of its unique sporting charm.

The thing is, that brand who shall remain nameless probably had a small part of this change, styles change; things come full circle. Like anything in any walk of life, fashion doesn’t stay still – well unless you live in the back end of nowhere in France, where the roll-neck sweater, white denim, bum/fanny packs and those Puma trainers that look like F1 shoes are still all à la mode. But I digress.

The late 70s was a time when cycling swapped out the itchy woolen kit for more technical fabrics, though I use that team very loosely. Lycra shorts were introduced by Assos in 1976 with the Ti-Raleigh, the first to team to not have shorts that elongated and became weighty in the rain. Castelli then popularized the shorts and material the following year. From that point on, materials and printing techniques allowed the peloton to explode with colour. And teams didn’t hold back. I don’t think it’s a coincidence that the original Oakley Mumbos and Rudy Project Super Performance were released around the same time.

At this year’s Giro it looks like colour and wild swing-for-the-fences design choices are back. Or at least in some small way. And ironically enough it’s made by that brand I was whinging about a few paragraphs back. The rest of the peloton (apart from a few Italian ProTeams) are looking practically dull in comparison.

All I can hope is that for 2021 we have an explosion of colour again, a few team kits that offend the eyes in the best possible way, kits that cause a small Twitter storm because it’s about bloody time.