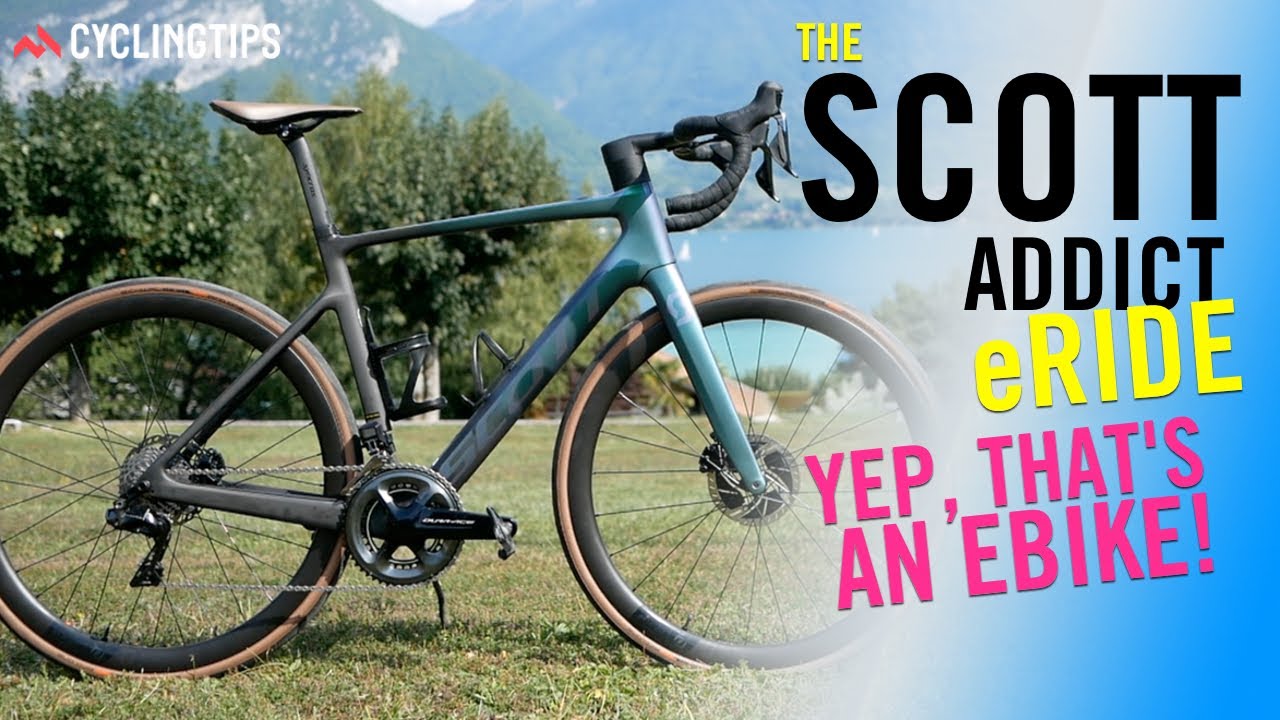 For this week’s “Shoddy video”, I have a review for you. I’m guessing some of the more grumpy readers amongst us may want to be sitting down and playing some soothing music for this one, as I’m about to present to you a new e-road bike, and we know how some people react to that kind of thing.

Scott recently stepped into the road e-bike market with a bike that, if I’m honest, looks pretty damn slick. It’s called the Addict eRide and it finally brings Scott into the pure road e-bike market. They’ve had a mighty fine line up of e-bikes since 2014, and it’s grown quickly. With the addition of the four new road e-bikes, it brings the swiss company’s e-range up to a whopping 74 models across MTB, urban, road and trekking.

On the first inspection, you’d be quite easily forgiven for believing that the Addict eRide isn’t, in fact, an e-bike. Its styling closely mirrors that of its non-motorized sibling, Scott’s out-and-out performance bike the standard Addict RC. Side by side the eRIDE looks slightly chunkier, but nothing that a glancing gaze would have the keen cyclist claiming its an eBike. The only thing that would give it away to the untrained eye would be the oversize Mahle rear hub, the weight (which I’ll get to in a moment), and that little light-up button on the top tube.

I’ll be honest, when Scott emailed me about a new e-Road bike they had in the works, I expected something catered squarely towards the endurance category and looking like it should. The Addict eRIDE in many regards does but also shies away in big swaths at the same time.

Firstly, the overall styling. It’s just a beefier looking Addict RC. The geometry has been tweaked, and understandably so. But not by much. The stack is a slight bit taller, and reach a touch shorter. When you get the two overlayed on top of each other, the silhouettes really do show the not-so-massive difference. But there’s enough there to make this ride like a bike that falls between the all-out race bike brethren and the standard Addict endurance bike. It straddles the endurance/race fit nicely. I’d think it’s a brave yet wise move with regards to who they believe this bike will cater to. It’s a bike that looks fast standing still and has a position that wants you to go fast.

Weight for the frameset is a claimed 1040grams. Not too shabby at all. The complete build for the Premium model having the usual tasty components such as a full Shimano Dura-Ace R9150 Di2 groupset, Syncros Capital 1.0 40e wheels and the eMotion X35+ motor plus the internal 252Wh battery tips the scale at a claimed 10.75kg. The size 54cm I was riding with pedals came in at a touch under 11.2kg. I have to say that’s one of the lightest road e-bikes I’ve thrown a leg over and from memory, the Wilier’s Cento10 Hybrid hits a similar mark. Scott though does claim it’s the lightest out there. I’ll give them that, for now.

What the Scott also has in common with the Cento10 Hybrid is that they both use the Malhe X35+ 40Nm Motor Hub Drive. This seems to be a go-to motor for many eRoad bikes, and it’s understandable. At 3.5kg for the whole set up, the battery, cables and a rear hub motor it is light-ish. Plus it’s far from bulky looking.

The performance from the setup also impressed. I learned that thankfully things have come a long way with hub-based motors in the three years since I road a the Pinarello Nytro. Scott has also dialled the motor in too how they want it to perform. Apparently, they’ve worked closely with the good people at Malhe, and it feels as though it’s aiding you with a wink and a nudge rather than the jolts of torque that I’ve experienced before. It certainly lulled me into thinking I was fitter than I am on several occasions.

To control this, you have a small button on the top tube, called iWOC with three assist choices. The lights around this button let you know what assist choice your in and how much power you have left.

I must mention the drag in the rear hub too, or lack of it when the motor isn’t in action. Older models I’ve noticed that once you hit that magic speed (or not so magic) of 25kmph/20mph when the motor stops assisting you, the hub can feel draggy or a lump to drag around. With the Addict eRide even with the motor off, it felt as close to a normal hubs performance as I’ve experienced. Quite impressive.

Ride distance is a claimed 120km and 2200m of elevation (if using both internal and external batteries), this will obviously depend on how much assistance you’re asking of the motor. Recharging time for the internal battery is a pretty snappy 3 hours.

The option of carrying a second battery on the down tube in a battery specific cage is helpful, but it certainly has a design flaw that I was a little miffed about.

This extra battery offers an extra 208Wh of power to use on the longer or more vertically challenging routes, but the downsides here are that it adds extra weight, approximately 1.5kg and takes up one of the water bottle mounts. The shape of the battery deems that it doesn’t fit in a standard cage; instead, you have this oversized proprietory cage that even if you didn’t want to take the extra battery limits you to only carrying a single water bottle. It’s a trade-off I feel could have been avoided, and I’m not sure why it wasn’t. I’m guessing Scott wanted a big powerful second battery and that’s as small as they could get it. Ce la vie!

On the flip side, the internal 250w battery is lovingly hidden away in the down tube. It actually took me a short while to work out how and where to remove it from if you ever needed to. A small plate on the underside of the bottom bracket give access to it, but you’d still need to remove the bottom bracket to access it. But realistically you shouldn’t have to as the charging is done via a small covered port in the base of the seat tube. This is also the same area where you would connect that second battery if you were planning on using it.

Having tested the current Addict back at its launch last year, one thing I was impressed at was the new Syncros Creston iC SL bar/stem combo. And I was so happy to see it be included on the eRide Premium model I tested. It’s comfortable (yes, that’s a personal preference) and the ease of maintenance seemed up there with the best-integrated options available. All cables pass through the bars then on down the front of an offset eccentric fork. The lower models use the Syncros Creston two pice bar and stem, not as slick but still a clean design. It’s possibly one of my favourite one-piece bar and stem setups.

The Range
There are four bikes in Scott’s Addict eRide range. The entry point is the Addict eRide 20 priced at €4499, this comes with a mostly Shimano 105 groupset but adds an Ultegra rear derailer. Instead of the one-piece bar and stem you get the Syncros Creston iC 1,5 compact bar and Syncros RR iC stem. Cables are still fully integrated and hidden away. And even though I like the one-piece setup, I’m guessing for most people this would be a better choice. Wheels are Syncros Capital 2.0 25e; the overall weight is a claimed 12kg on the dot for a medium. The eRide ten at €6299 sheds 400 grams to come in at 11.6kg; comes equipped with Ultegra Di2, plus the same bars, stem and wheels as the eRide 20. Then there is then the Contessa, Scott’s ‘women’ offering, basically the same build as the eRide 20 but with a very, very sweet metallic purple paint job.

As for the full review, well, this is no Dave Rome or James Huang offering, I should have warned you when you started reading. So I’m going to force you to watch the vid, to check out what I really thought about the bike.

But since you’ve already got this far down, I won’t disappoint…too much.

All-round, this is a bike that had me impressed. It looks the part for starters. But it delivers more than I expected. The more you put in, the more you get out with the eRide. Head out for a leisurely potter and you’re not going to get the bike to come to life. But put some effort in, throw some watts down and the bike springs into race performance mode. It really is a bike that gives the more you put in. Hit the hills and work a little and it’ll have you feeling like a climbing goat.

We’ve got a few staff here at CyclingTips who own eBikes (mostly commuters and eMTBs) and they all say that when they get out on them, they ride hard you come back feeling as though you’ve had a solid work out. The Addict eRide is no different. And the fact that you can sync the motor to your heart rate monitor and have it assist you on your BPM’s really turns this into a smart training system.

The assistance of the motor is also an area that had me grinning at how far technology has come in such a short space of time. With little to no noticeable drag when turned off, it was a stark difference to the Pinarello Nytro I tested back in 2017, admittedly the drive systems are different but still, things have come on in leaps and bounds.

It’s a premium eBike and cost as such, hence the model name! The question is, how big is this market. If the mountain bike e-bike market is anything to go by its going to be huge. Scott has thrown their vast race bike knowledge at this bike, and I feel they’ve produced a lovely machine.

OK, now you’ve got an idea on how I feel go and watch this weeks video. If not for the quality content (even if I say so myself) then for the YouTube comments. It’s always an interesting place to hang out, and even more so with this being an e-bike. I’m gonna wager that it’s like the wild-west of comment sections.