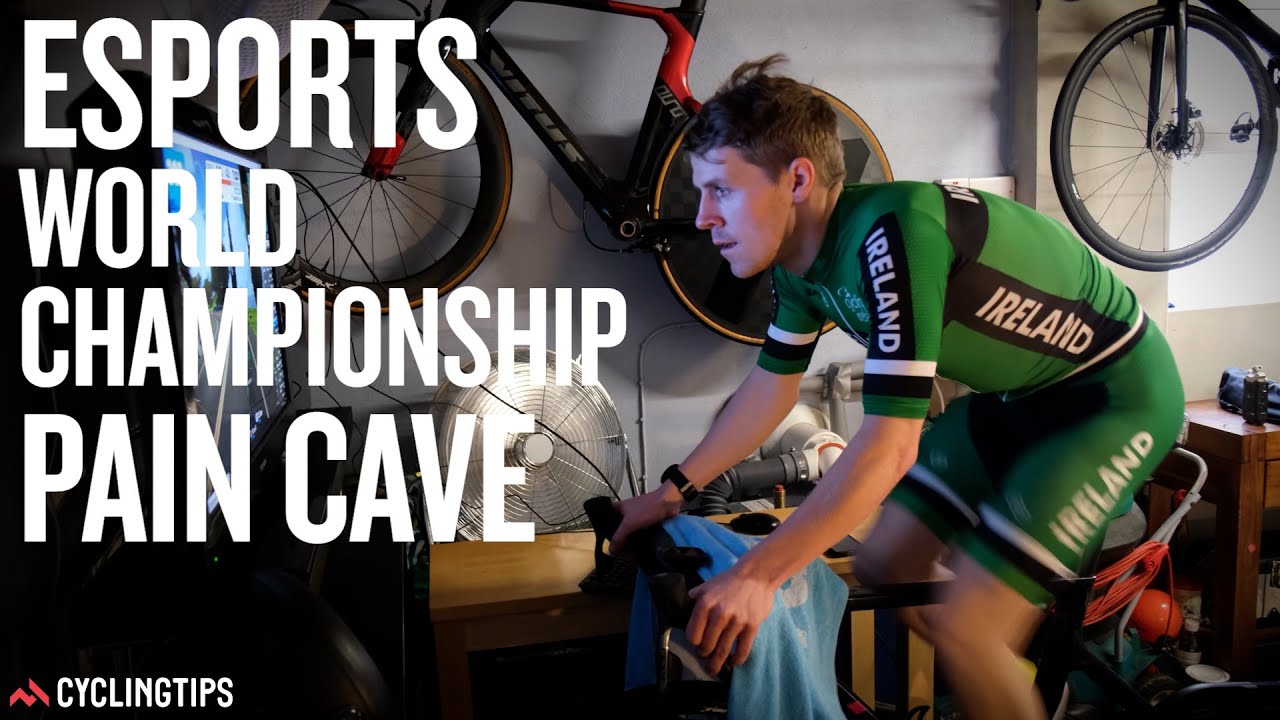 The first-ever eSports world championships took place this week, pulling in riders from all over the world to duke it out virtually on Zwift’s fictional Watopia island. But every one of those riders was in an actual place, on an actual trainer, sitting in front of actual fans. What did their in-real-life setups look like? Where did they find marginal, and not-so-marginal, gains? We thought it might be interesting to peek inside a UCI eSports worlds rider’s pain cave.

Chris McGlinchey was Ireland’s sole representative in the inaugural eSports worlds and a seasoned Zwifter. Ranked world number one for a while earlier this year, with many Zwift races on his palmares and an outdoor road national championships podium to his name, McGlinchey started the worlds as an outside favourite for the win.

CyclingTips spoke to McGlinchey immediately following the race finish to get an insight into how he prepared for the race and any hacks he had made to his indoor setup. Although disappointed not to make the top ten he was aiming for, he was content to come away with 13th place on the day and to have had the opportunity to represent his country in the inaugural eSports world champs.

We started by asking McGlinchey about the essentials of his Zwift setup, the trainer, bike, computer and display. Although usually a Wahoo Kickr user, all riders in the worlds had to use a Tacx Neo 2T trainer. While on the face of it both trainers appear similar and both are direct drive setups, McGlinchey did have some teething issues with his new rear end. He had to adjust his brake calliper to ensure no nasty vibration damage, and also had to come up with a completely new take on the rocker plate – but more on that later.

A gaming-specific computer ensures Zwift runs at their very best with no lag or performance dips. The computer is connected to a 32inch widescreen tv to give a clear view of what going on in the race. Interestingly, the screen is set a bit higher than most Zwifters tend to opt for, but Chris says this feels more natural to him.

Not one, nor two, but three fans take care of the ventilation. Combined with a breezy temperature of six degrees celsius, overheating was not going to be an issue.

Perhaps most interesting of the basic requirements of Zwifting was McGlinchey’s Vitus bike. Far from being an old bike condemned to the indoor trainer, this is actually a pre-production Vitus about which McGlinchey remained tight-lipped. The only thing Chris could confirm was that this is a new aero offering from Vitus which we can expect to see in January or February of 2021. Of what we can see, the bike is running Sram Red AXS eTap with 50/37 chainrings and a 10-33 cassette, a Selle San Marco short fit saddle and Prime wheels.

Let’s turn our attention to the less essential items and what might be considered marginal gains.

The one thing that immediately catches the eye here is the array of barbell weights littered around the base of the trainer. While most riders are turning to rocker plates to recreate the natural side-to-side movement of outdoor riding, McGlinchey has done the opposite. He has strapped his Tacx trainer to a disassembled rocker plate which has the bottom half removed and then the weights are set atop the plate which lays directly on the floor. McGlinchey explains that the goal here was to completely eliminate all movement of the trainer during max efforts and sprints for the finish line. While this fixed-in feeling might not be to everyone’s liking, McGlinchey believes any movement in the trainer must result in lost power.

While the shackled trainer secures the rear end of the bike, the front wheel was still free to move. McGlinchey went one step further just hours before the race start, replacing his front wheel block with two stacked lumps of MDF. He then strapped the front wheel and MDF to the non-rocking rocker plate. Apparently, no matter how hard he sprints now, that bike is going nowhere.

In a more traditional style of marginal gain, McGlinchey opted for a full Ceramic Speed drivetrain, including bottom bracket, UFO chain and oversize pulley wheels. The theory here is that while normally in community Zwift races he can use his crank-based power meter as his power source, the world championships required riders to measure power through the trainer, meaning drive chain efficiency would play a role. With the power effectively being measured at the rear wheel, any watts lost through the drive train would result in losses on the roads of Watopia. While McGlinchey stuck with his usual setup for shoes, saddle, handlebars and so on, he did have to ride in Irish national team kit. While his usual preference is to not wear a jersey while training indoors, for the race today he was required to do so. Cycling Ireland was able to supply a lighter more breathable version of their race jerseys, which was initially designed for use at the Tokyo Olympic Games. While the extra breathability would certainly have done no harm, considering the temperatures of an Irish winter and the wind chill of all those fans, it certainly wasn’t the humid conditions the jersey was designed for.