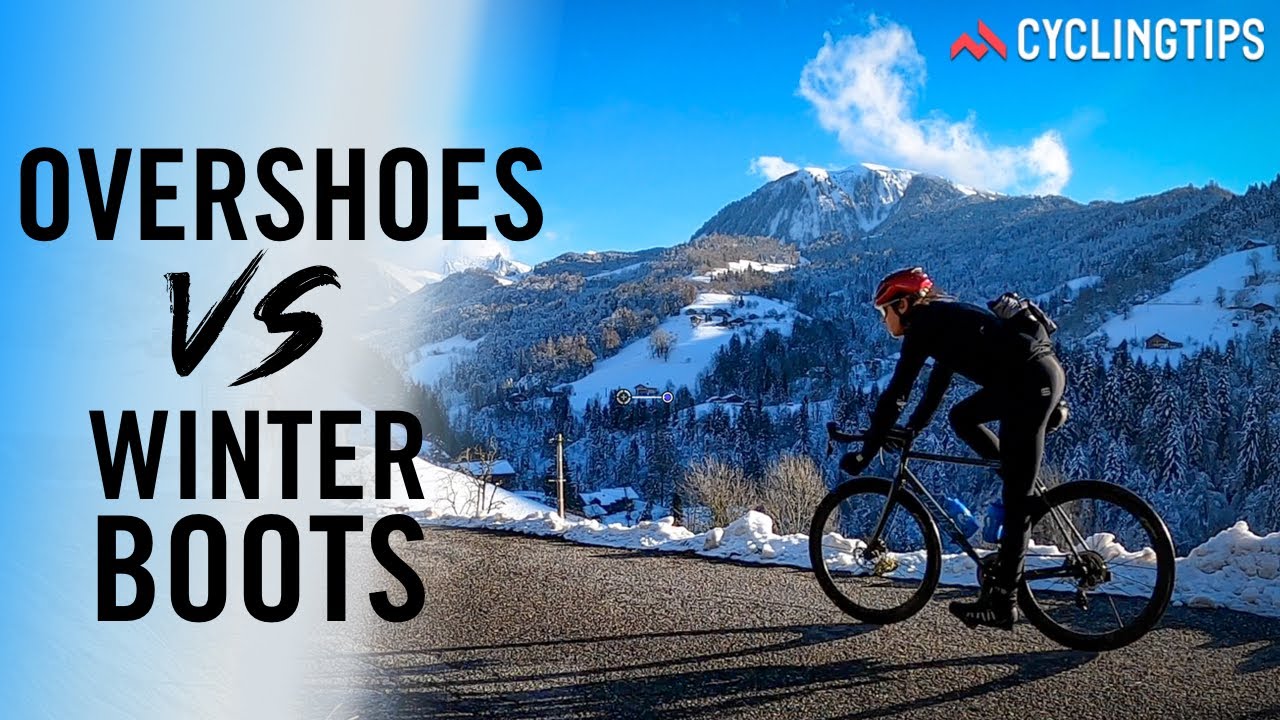 It’s that time of year again when the weather turns grim; the roads get covered in grime, the heavens open up, and the chilly winds make riding a little less enticing. Or at least if you live in the northern hemisphere! For those of you in the upside-down part of the world where the sun is now warming your cockles, may I advise you to bookmark this page and return in six months? As I’m about to delve into the world of keeping your little pinkies toasty.

The question of “overshoes or dedicated winter boots” clearly falls into the same camp as all the other big questions of our lifetime. Hamburgers or beefburgers? (honestly what is the difference?) Ketchup or mustard? Cake or bacon roll? Ride in the rain or on Zwift? Disney or Loony tunes? Greedo or Han (who shot first)?

You get the idea: the big, serious, meaningful questions.

Today we’re discussing the pros and the cons of each. Do you need an array of overshoes or can you get by with just a quality pair of thermal winter boots? Well, I’m hoping this week’s article and video will help you decide.

I’ve been a long time overshoe user for the simple reason that for many years winter boots were extortionate in price. You’d be hard pushed to buy a pair for under $250. Not cheap! But over the past few years, they’ve slowly tempted me, not just because now there seems to be a wider choice with a lower entry point but because the difference between that and a top tier overshoe can at times only be around $50 / €50. The fact that I now live in the French Alps and the winter months here are far drier but nippier than back in the north-west of the UK where I grew up has had me wondering.

I’ve been testing the Scott Road Heater Gore-Tex – not just a snappy name but also a toasty warm shoe. At $250 they’re not the cheapest boots you can find, but they are chock full of the good stuff to keep your feet comfy for long rides in the majority of grim weather rides.

Gore-Tex supplies the overall waterproofness, with a pull cord closure and a waterproof flap and sealed zipper to make it all snug and weatherproof. The collar is made of neoprene, and I’d say is the only slight let down, as I’d love it to be higher and a bit tighter around my ankles- maybe I just need to work on my ‘cankles’. That’s the one area where if water wants to seep in it will on longer rides. A set of cycling gaiters would rectify this problem, I’m sure.

I’ve been using the three-bolt compatible version of the shoe but may have made a foolish choice. Three-bolt of course means you use road pedals, two-bolt means SPD-type mountain bike pedals, which makes room for more tread on the bottom of the shoe.

Though SPD pedals are more commonly found on mountain and gravel bikes, that means they’re also a good match for the slick surfaces of winter. Sure, SPD pedals have a smaller platform when compared to road pedals for slamming all that power you have into them, but the advantages of a better, grippier walking sole on the shoe outweighs that in my view.

SPDs are designed to work when caked in dirt, plus, generally speaking, the boots with SPD compatible soles typically come with far more substantial grip on the soles. Perfect for not looking like you’re doing an impersonation of Dick Van Dyke in the scene from Mary Poppins where he’s dancing with some cartoon penguins.

The Scott boots won’t be alone in this design department. All winter boots will have a similar construction, some with fancier materials and others with lesser-known materials that may not be as waterproof and breathable as Gore-Tex but should do a good enough job and probably save you up to $100. Something along the lines of the Fizik R5 Artica fit the bill in that department perfectly.

When it comes to the sole, unlike summer shoes, stiff carbon may not be your best bet. Sure it’s good for not letting you lose a watt of power, but carbon can be a bit more prone to making your feet that little bit colder. It’ll also force the price higher. Plus, all those gritty, rough surfaces that you’ll come in contact with won’t be too kind on carbon soles. In place of carbon you’ll probably want to look for a hybrid sole, something made of glass fibre and resin, or such.

Boots, for the most part, can be bulky, though the same could be said for some of the cheaper less slick-looking overshoes on the market.

What I have found is that though my feet are warm, my shins can get a tad chilly — being used to overshoes, and exceptionally high ankled overshoes, its a noticeable difference. Again, a small gaiter would help in that department.

Should you buy dedicated winter cycling shoes? I’ve found my boots ideal for the riding here in the French Alps, where it’s cold (today started as a nippy -3 degrees celsius and hasn’t risen much above that) and usually pretty dry. That’s the key.

Winter boot pros: Warmer than overshoes, less faffing about. Snow can’t get in the bottom like it can with some overshoes. Work better off-road if you’ll have to get off and walk at all.
Winter boot cons: Lower ankle cuff can lead to cold shins and, in some boots, let water in the top. Better for cold, dry climates.

Overshoes: the good, the bad and the baggy

This one could be summed up just like like last week’s challenge, where I had to kit myself out for winter for a budget of $200. That challenge taught me one thing: if you skimp on items for the winter, you’re gonna notice. And suffer. Great performing kit that will keep you warm and dry for hour after hour in grotty conditions is hard to find at a bargain-basement price. You’re going to have to put some cold hard cash down. And the same pretty much goes for overshoes.

The best I’ve ever used for deep, deep winter – no matter the conditions – are the Pippi Longstocking-looking Spatz Roadman II overshoe. All I need to say about these are that they’re designed by an ex-pro cyclist who lives in Yorkshire and has raced and trained year-round up’t north. If you watched the worlds in Harrogate last year, you know what I’m getting at. But they come at a price.

What should you look for in an overshoe then? Well, from experience, a cheap neoprene cover alone won’t cut it, they’re generally not great for long wet rides as they have a tendency to, over time, soak up water. Sure, your feet my be warm, but it’s that damp soggy warm. Plus once home your toes will resemble that of a frankfurter that’s been found at the bottom of the washing up bowl. Something like this will set you back under $30.

If it’s dry and mild, you can get away with that. If it’s very cold and/or wet, you can’t.

If it’s warmth and waterproofness you are after, you need to look for an overshoe with some sort of treatment on the outer layer to repel the rain. These will still probably be made of neoprene but will look a bit more rubbery (for want of a better word). Inside, the lining will ideally be Roubaix-esque. Fuzzy. Then there’s the need for taped seams, and a good quality sealed zip. Also, make sure you get something where the sole isn’t too open, as water will find its way in easily if so.

Overshoes pros: Cheaper, can move between shoes, can be layered depending on temperature. The best are better at keeping water out of your ankles.
Overshoes cons: Poor fit lets water in. Many cheaper options aren’t waterproof at all. Not generally as warm as a dedicated winter shoe. Get eaten up if you have to walk much.

If you want to know more, delve into this week/\’s video. Trust me, you’ll enjoy it – if not for the battle between overshoes and winter boots, then just for the Alpine scenery shots alone. Things are looking very festive here.

Cheers, ’til next week.