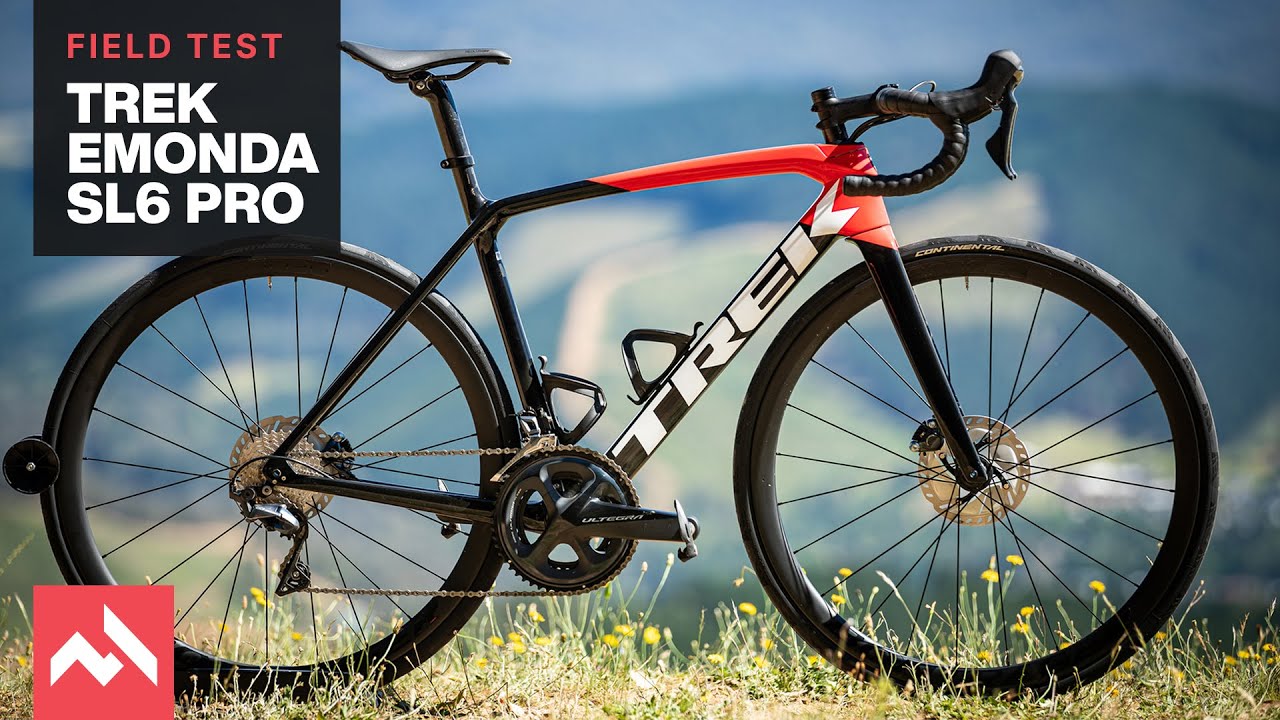 The first review from our 2021 Road Bike Field Test. We review and compare the mid-priced version of Trek's newly overhauled Emonda race bike.

When it was first released, the Emonda was a climber’s dream that Trek claimed as the world’s lightest production offering. Dealer events would have the ultra-premium 4.6 kg (10.25 lb) SLR 10 hanging from large helium balloons, and the American company made a big deal of it providing a benchmark stiffness-to-weight ratio.

In many ways the Emonda back-filled the void left by the once round-tubed and low-weight Madone that was then becoming more aero. And as the Madone further trended to becoming Trek’s full aero racer (with an obvious element of comfort, too), the Emonda kept to its round tubes and stiff hill-attacking personality.

That changed for 2021 with Trek overhauling the Emonda in a similar way to how almost every other brand has overhauled its lightweight race machine. The Emonda, now disc-only, gained a little weight by moving to slippery truncated airfoil tubes and a wholly new approach to cable routing in an effort to make it sleeker all-around. Additionally it should run quieter with a new threaded bottom bracket format, too.

All of those techy details (and more) were covered in James Huang’s review of the top-tier Emonda SLR. And while James went pretty deep with that review, he left a few unanswered questions in relation to the more affordable 2021 Emonda SL. And so it’s exactly this more-affordable, second-tier version – specifically the Shimano Ultegra-equipped Emonda SL 6 Pro – that we took to our Field Test in Victoria’s High Country.

An unpainted 56 cm Emonda SLR frame has a claimed weight of 698 g, while the matching fork adds 365 g. By comparison, the Emonda SL frame sits at 1,142 g, with the fork at 380 g. This 450-gram difference is simply attributed to the carbon composite layup used (in Trek marketing speak, that’s OCLV 800 vs OCLV 500), and simply less material is needed when the more expensive fibres and resins are stiffer and stronger.

That 1,142 g figure for the Emonda SL isn’t terribly heavy, but it is noticeably plumper than many other second-tier racing frames on the market. For example, the new Giant TCR Advanced frame offers a claimed weight of just 850 g, while Canyon’s comparable Ultimate CF SL frame has a figure of 980 g. And the Emonda SL’s higher frame weight is of course reflected in the complete bike weight, too, with our 54 cm SL 6 Pro tester tipping the scales at 8.01 kg (without pedals).

Beyond the weight, the Emonda SL and SLR framesets are remarkably similar. They share the same moulds, and therefore the geometry and aero tube profiles are identical. Trek claims the stiffness profiles, and therefore ride quality is effectively equal. The way the cables are funnelled through the front of the head tube is the same, the new threaded T47 bottom bracket is mirrored, and likewise for the use of Trek’s reverser topper seatpost design. And heck, even the paint of our SL 6 Pro was an almost exact match to the SLR 9 that James tested.

Beyond the frame there are some more apparent differences. The SLR models feature a wonderfully light Bontrager one-piece carbon handlebar and stem, while the SL models use a more traditional bar and stem setup. And it’s a similar story for the other components which are lighter (and more expensive) on the SLR models.

A race-ready geo and ride

The Emonda of old had two geometry options. There was the low and aggressive “H1” pro fit (offered in the SLR level only), and then the more mainstream “H2” with its more accessible and upright stack figure. For 2021 Trek combined those two fits into one with “H1.5” being used across all Emonda models.

That means the new Emonda SL is more aggressive than the last, and relatively speaking the reach figures are on the long side and the stack figures are fairly low. For example, our 54 cm tester offers reach and stack figures of 386 mm and 541 mm respectively, right in the realm of where many race-focused machines sit.

The handling is equally as sporty, with a traditional 73º head angle and 45 mm fork offset combining for a 58 mm trail figure with the control 28 mm Continental GP500 tyres fitted (25 mm Bontrager tyres are fitted as stock). And the wheelbase is kept fairly tight, too.

Trek balances that longer reach by fitting a shorter-than-usual stem (90 mm on the 54 cm), and as a result the bike fits a little more upright than the figures may suggest. At the same time, that shorter stem produces a bike that handles even quicker and with less input than other race bikes with comparable trail figures.

And it’s this quick-feeling attitude that will reward a rider with good handling skills. The Emonda can dive into turns and jump back out of them with little input. And it does that without an inkling of instability at speed.

Further rewarding a good handler is the stiff frame that pounces when called on and lets you feel what the tyres are doing through your hands and bum. No doubt, this was the firmest-riding bike we had at our small Field Test, and despite the wider 28 mm tyres, I could still feel the cracks and inconsistencies in the road surface. Thankfully that stiffness manages to find the right side of the line between a bike that speaks to you and one that skips about.

Both Andy van Bergen and I agreed the Emonda was the most impressive under power when directly compared to the Giant TCR Advanced Pro and Canyon Ultimate CF SL, and similarly it beats the Specialized Tarmac SL6s that we both have sitting at our respective homes. I’d most liken the ride to BMC’s recently updated and stiffened Teammachine SLR01.

That stiffness is great for riders who like out-of-the-saddle attacks and to feel their energy reach the rear wheel, but it’s less ideal for those seeking a smooth and compliant machine. And while many other brands utilise flexible seatposts to achieve more comfort through the saddle, Trek’s own reverse topper seatpost design just rides stiffer than the company claims and there are no options to change it for something more flexible – a somewhat surprising element given the company has gone to great lengths with its IsoSpeed technology to produce seated flex in its aero race and endurance platforms.

Instead your best bet to add comfort to the Emonda is through the tyres. Trek officially states the Emonda can fit up to a 28 mm tyre, however that figure is extremely conservative. I trialled some 32 mm GP5000s (measured 32 mm width) in the frame without any sign of issue.

Compared to the previous version, living with the new Emonda frameset has some wins and losses. The new internal cable routing sees the brake hoses and shift cables enter through a funnel at the proprietary headset top cap, and then squeeze between the squared-off fork steerer and top headset bearing. It looks wonderfully clean, but as James previously covered, it does introduce some servicing difficulty, and that’s especially true for this model that uses mechanical shift cables.

Perhaps offsetting that servicing pain is the new T47 threaded bottom bracket, something that’s more universally compatible with oversized crankset spindles and surely simpler to service than Trek’s previous BB90 design that saw bearings pressed directly into the carbon frame. And while that new bottom bracket (made by Praxis) does require a unique tool, servicing it is vastly more accessible than with the former press-fit design.

I won’t get into the nitty-gritty of the aerodynamic design – we’ve done that – but I will say that the lines of this bike are quite stunning. The aero head tube is just so distinct, the wide and concave top tube offers a wonderfully interesting curvature, and similar can be said for where the long and flowing seat stays connect.

The paint is also well done and makes this look far more expensive than it is. And as an added bonus there’s a second choice of colours, too (dark grey with chrome lettering). Although, perhaps Trek could have been a little more subtle with its logo, rather than turning the down tube into a rolling billboard.

The tested Emonda SL 6 Pro sits smack bang in the middle of the Emonda’s range and features a full Shimano Ultegra R8020 mechanical groupset matched with a smorgasbord of Bontrager components (Trek’s own component and accessory brand).

Adding US$500 to the bike’s price, those carbon rims offer a relatively shallow 35 mm aero-profiled rim that handles remarkably well without any sign of the flutter often present with deeper wheels in crosswinds. They offer a fairly modern profile, with an inner width of 19.2 mm and an outer width at 27.7 mm. However, the material is somewhat misleading and these wheels aren’t as light as you may expect. I weighed my sample set at 1,740 g for the pair (770 g front, 970 g rear).

That weight doesn’t sound like much, but it impacted how the bike felt when attacking steep slopes, with Andy remarking that it made the bike feel sluggish to respond. Carbon isn’t always an upgrade.

Another area that left Andy and I underwhelmed was the Bontrager Elite VR-C handlebar. We just didn’t get along with the ultra compact shape of the drops which left me complaining of wrist clearance issues, while Andy found that he was unable to make comfortable use of the drops due to his hand sitting proud within the tight radius. We both agreed that the handlebar would be the first thing we’d change.

Thankfully that’s the extent of our issues, and the rest of the build kit is hard to fault. Bontrager’s basic alloy stem works with its Blendr series of computer and light attachments (some of which are supplied), while the new Bontrager Aeolus Comp saddle features a modern short-nose design with a generous centre channel. And all the smaller details, including the proprietary headset top cap and seat post topper, add to a premium look and feel.

And finally there’s the Shimano Ultegra groupset. One thing James wasn’t able to test in his review of the SLR 9 was how the internal cable routing impacted mechanical shifting quality. I can confirm that it doesn’t. The shifts were just as snappy and consistent on this bike as they were on other bikes, and they should remain that way for a fair while with full-length housing used from shifter to derailleur. And that full-length housing should ease future repairs, although it does add to the bike’s total weight.

Despite the lower price, Trek has done a solid job of bringing the Emonda SLR’s attributes to the SL. It offers the same handling, stiffness and aesthetic of its pro-level sibling, and that makes for an impressively enjoyable bike to ride.

However where the more expensive Emonda jumps with joy at every thought of an attack, the extra mass of the SL sees it hesistate somewhat. That difference may not be reflected on the clock, but it sure can be felt and it’s a constant reminder of the price tag attached to this ride.

The new Emonda SL will be a good fit for the rider wanting a well-rounded race bike that handles and behaves like a WorldTour machine. However it’s best to avoid this one if you’re seeking an opulent ride quality or the lightest bike for the given sticker price.