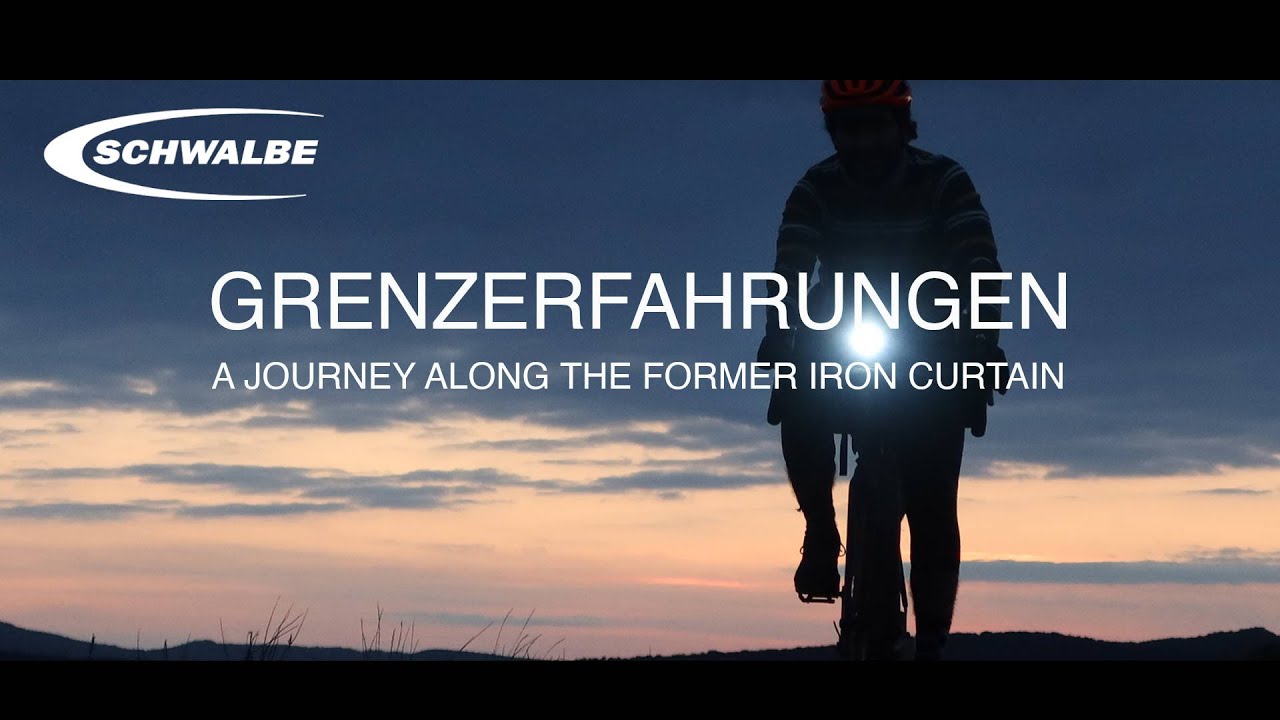 Join Markus Stitz as he bikepacks through history on the Iron Curtain Gravel Trail.

From the end of World War II until the turn of the 1990s, Europe was a continent divided. In the east lay the Soviet Union and its allied states; in the west, a collection of North Atlantic Treaty Organization (NATO) members and neutral countries. Between east and west lay ‘The Iron Curtain’. The term was both a nod to Soviet attempts to distance itself from the West, and later, the name of the 7,000 km-long physical barrier that separated the two worlds.

Markus Stitz is a cycling adventurer and filmmaker based in Scotland. He grew up in East Germany in the time of the Iron Curtain and was 10 years old when the Berlin Wall fell, paving the way for the reunification of Germany. In his latest film, Markus rides the length of the Iron Curtain Gravel Trail, a bikepacking route that follows a section of the former Iron Curtain through central Germany.

Making a film about cycling the former Iron Curtain was an idea I had on my mind for a while. There were a few, mostly personal, reasons for that. But it’s also safe to say that the limited opportunities to travel in 2020 encouraged me to finally make it happen. After being grounded for a few months I could combine a long-awaited family visit to Germany with a few cycling projects in October, shortly before the second wave of COVID-19 hit Europe.

After two years away from filmmaking I released No Stone Unturned in 2019, which prompted Schwalbe, one of my long-standing supporters, to commission me for a future film. There were no strings attached to the offer, as long as I was rolling on their tires. I was free to choose the topic and location of the film, and had a few ideas for trips in Malawi, Norway, Canada, and Australia. But right at the start of the pandemic in March 2020 it became clear that those trips would have to wait for much longer.

When I cycled through Kyrgyzstan before the Silk Road Mountain Race in 2019 I was often reminded of my childhood in East Germany. Shortly after leaving Bishkek I passed through a village called Rot-Front. Founded as Bergtal, it was renamed in 1927 during the Stalinization of the Soviet Union. When I passed, the original village name was displayed again, albeit in smaller letters.

Rot-Front not only reminded me of the few villages and towns with German names I had passed on my round-the-world trip – like Hahndorf near Adelaide, Australia, or Berlin in Pennsylvania, USA. This village in Kyrgyzstan had another story to tell.

After the end of the Soviet Union, and with the collapse of the collective farms and other state enterprises, many jobs were lost, and ethnic Germans emigrated from Kyrgyzstan to Germany. The German population was reduced from 900 in the early 1990s to about 500 in 2012. Cycling through the village, and seeing the many Lenin statues in towns and villages, reminded me of the fall of the Iron Curtain, and the fate of former East Germany.

While experiencing democracy and freedom for the first time in their lives, most East Germans would soon encounter economic hardship and the loss of jobs. Many people left the villages and towns along the former Iron Curtain for work and a better life in different parts of West Germany, mainly in the south.

In 2019, the year I completed the Silk Road Mountain Race and the 30th anniversary of the fall of the Berlin Wall, things were largely different in Kyrgyzstan and Germany. When cycling through the former Soviet Union state I still got reminded of its communist past. Statues, vehicles imported from East Germany more than 40 years ago, and signs on lamposts were prominent in towns and villages. Very little of the communist past remained in Germany.

The only thing that largely still existed was the Kolonnenweg, the concrete track that was built in the 1960s to patrol the border, heavily fortified to stop the mass immigration from East to West Germany since the establishment of the German Democratic Republic in 1949.

When talking to friends in the UK (where I’ve lived since 2009) it was often described to me as the former ‘tank track’. While certainly built to withstand tanks, the Kolonnenweg wasn’t used by tanks, but by the Grenztruppen, the division of the East German Army responsible for guarding the former border. Their vehicle fleet consisted of motorbikes and a modified version of the Trabant – the car my parents owned until 1989 – 4X4s and trucks, but tanks were not used to patrol the border.

Unlike Kyrgyzstan, there is little physical evidence of the heavily fortified border nowadays. What remains are the trees that have grown where the fence used to stand. On some stretches of the Kolonnenweg nature has taken back what was once a deadly strip. The border fortifications remain in museums, and road signs, stones and plaques tell the many human stories connected with the Iron Curtain. Some of the (mostly rundown) watchtowers still dominate the beautiful countryside.

It’s the beautiful countryside and my personal memories as a child growing up very close to the border that inspired me to design the Iron Curtain Gravel Trail, and to document my journey in the film ‘Grenzerfahrungen’ (which you can see at the top of this article). While the whole Iron Curtain stretches 6,800 km from Finland to Greece, I picked a section that’s cycleable in one or two weeks, and is well connected to public transport. With gravel bikes becoming the new gold standard in bikepacking, my intention was to design a route that best suits gravel bikes. A mountain bike of any kind would be equally fun too.

Starting at the Drei-Länder-Stein in the Harz Mountains, north-central Germany, the Iron Curtain Gravel Trail travels along the former border of the Free State of Thuringia, where I was born in 1979. The route finishes at the Dreiländereck on the Czech-German border. The route can easily be extended to the north and south, and there are plenty of interesting stops along the route to spend the day. For an alternative route, the EuroVelo 13 or the Grenzsteintrophy are worth checking out.

A few of my personal highlights of the route were the Kelle Cave near Appenrode, the ruins of Walkenried Abbey, the Sonnenstein skywalk and ruins of Hanstein Castle in the Eichsfeld, the views from the Teufelskanzel and the secret Stasi tunnel, and hearing the birdsong on the Dankmarshäuser Rhäden while admiring Monte Kali, an artificial salt mountain and the beautiful open countryside and steep hills of the Rhoen Mountains.

Of the museums along the former border I was most fascinated by the exhibition at Point Alpha near Geisa. It was here that American and Soviet troops were facing each other directly during the Cold War, as the Fulda Gap offered one of the two obvious routes for a hypothetical Soviet tank attack on West Germany from East Germany.

Other highlights include the stretches of the route through the beautiful valley of the Tettau, and the three houses in Kleintettau that resisted communist rule; the Rennsteig, one of Germany’s best known long distance paths that was spilt by the former border; the slate covered houses in the Thuringian and Franconian Slate Mountains; and the tranquility of cycling along the Saale river.

One thing that took me by surprise is the remoteness of the route. Many people fled East Germany after the establishment of the German Democratic Republic in 1949. The Berlin Wall and the heavily fortified border were erected to ‘protect’ the communist regime, but also to put an end to the immigration of East Germans to the west. During the Cold War settlements close to the border were flattened, and the economic problems in the early ’90s caused more people to leave. In a country with such a high population density as Germany, the Iron Curtain Gravel Trail takes cyclists off the beaten track.

It’s a ‘real’ bikepacking route, where I had multiple opportunities to reconnect with nature. The small shelters along the route provide beautiful opportunities to spend the night. Although wild camping is forbidden in Germany, resting for a few hours in a sleeping bag is widely accepted. The small towns with restaurants and hotels offer an authentic experience, far off the beaten tourist trail.

Amongst the beautiful countryside and the rich history there’s also a lot of hope. Since 2017 the population in the east of Germany is growing again. People are returning, discovering not only the natural beauty along the former Iron Curtain, but also the opportunities that arise with that.

I moved away in 2006 to live in New Zealand and Scotland. I cycled around the world and have seen a lot of amazing places, and I was curious what experience I would have cycling through such familiar territory. It’s safe to say it was one of the best bikepacking experiences of my life.

Follow the link for more information about the Iron Curtain Gravel Trail. To watch more of Markus’s films, head to his YouTube channel.