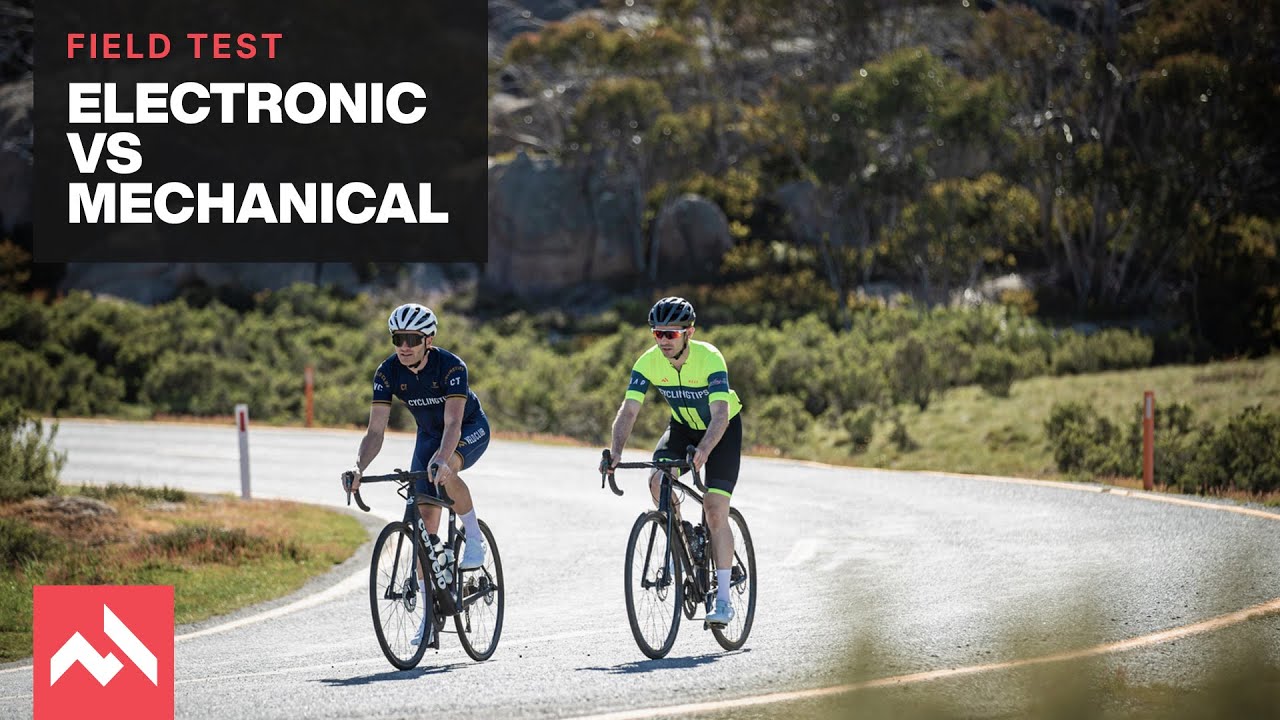 There’s a growing trend amongst performance road bikes of hiding cables for a sleek look. Some brands have managed to find a way to squeeze both brake hoses and gear housings through tight bends, while others ease the process by making their bikes compatible with electronic gears only (e.g. Shimano Di2 or SRAM eTap).

And it’s exactly this trend that had us keen to talk through some of the bigger points in the debate of electronic versus mechanical shifting when buying a new bike. No longer is it a simple case of which one shifts better, faster or requires less maintenance – the topic has become broader than that.

And so while sitting in the middle of an apple orchard within Victoria’s High Country, we decided to do what anyone else in our situation would: discuss the major pros and cons of derailleur-based electronic gearing for road and gravel riders. Consider this a beginner’s guide to the topic.

A mechanical connection versus an electric zap

Cable-operated derailleurs date back some 70 years, and since then we’ve seen a slow evolution of the technology, including the introduction of indexed gears, the moving of the shifter to the handlebar, and general refinement of the system. However, what has remained unchanged is the steel Bowden cable connecting the shifter to the derailleur.

That changed in the early ’90s when Mavic showed that electronic, motor-driven derailleurs were a possibility and that perhaps there was another way to move a derailleur. But it wasn’t until more than a decade later that Shimano’s Di2 (and to a far lesser extent Campagnolo’s EPS) made the idea a success. Today it’s a rare sight to see a mechanical groupset raced at the sport’s top-level, and it’s also becoming increasingly tough to buy a top-end bike off-the-shelf with cable-operated gearing.

The early sales pitch for electronic gearing was that it provided an effortless and fast gear shift without you having to mechanically leverage the derailleur yourself. Electronic gears were also intended to be set-and-forget, and short of the battery running out of juice or a knock to the derailleur, the system would continue to work exactly how it was initially set up (at least in theory).

Those same benefits continue through to today, but the latest performance bikes have introduced further positives for electronic gearing. And so without getting too far into the weeds, here’s a short look at the pros and cons of modern electronic derailleur-based drivetrains.

Pressing a button and hearing a derailleur go “bzzzzzt” is surely easier than pushing on a mechanical lever until it hits an index point. Don’t get me wrong, modern mechanical shifting is amazing, but there’s just no beating a small servo motor doing the work for you. This is especially true for front shifting and equally applies to rear shifting with the advent of clutched derailleurs (for increased chain security) and complex cable paths.

If you’re new to cycling, things can get a little confusing on a bike that has gears at the crank and rear wheel. Remember how weird it was that the front shifter buttons went in the opposite direction to the rear derailleur? By contrast, electronic gearing can be set up to be intuitive.

Going a step further, a number of electronic drivetrains can be used in a sequential mode that means the front shifting is effectively taken care of for you. This may not be an appealing feature for the experienced cyclist, but it can be a game-changer for those new to the sport.

Traditionally a mechanical shifting system would have a derailleur connected to the shifter via the cable, and the location of your shifter would be the only place you could shift from.

Electronic shifting changed that by allowing optional shift points to be added. As a result, it’s now common to see sprinters with a second set of shifters in their drops, climbers with buttons near their stem, and time-trialists with shifters at both available hand positions.

Speak to any bike mechanic and they’ll tell you the biggest benefit to electronic drivetrains is that there’s no mechanical cable or housing to compress, crack, contaminate, rust, or fray. And this benefit certainly becomes a bigger win on modern bikes that have hidden cabling paths.

Unless something has gone truly awry on an electronic system, it’s pretty much set and forget. Once set up correctly, an electronic system should only ever require adjustment if the derailleur has taken a knock or if the gearing sizes being used are changed. And that simplicity is sure to assist with easier servicing over the life of the bike. Just be sure to keep that battery charged.

In recent years we’ve seen bikes become increasingly more integrated, aerodynamic, and clean-looking. A part of that has been the hiding of cables and the latest integrated road (and gravel) bikes are now going to great lengths to hide cables entirely inside of the bike.

These hidden cable paths look great but they present significant issues for mechanical derailleur systems. The cable paths are now longer and more convoluted than ever before, and that directly results in more cable friction and therefore poorer shifting. Additionally, servicing those cables is now a far more complicated process.

Electronic shifting may be the cause of this issue, but it’s the solution nonetheless.

This closely ties in with the points above and is most applicable to SRAM’s eTap wireless systems or perhaps even FSA’s WE group. A general lack of wires is inevitably easier to set up and install than one that requires cutting cables or measuring wires. In SRAM’s case, you quite literally bolt on a couple of derailleurs and wirelessly pair them to the shifters – it’s like connecting new Bluetooth headphones to a phone.

Equally, SRAM’s wireless system has allowed a number of smaller frame makers to all but forget cable routing and go with clean, simple, and elegant designs. Even where cables aren’t concealed through the handlebar or stem, a wireless system is definitely nicer looking.

Electronic gearing remains a premium feature. The cheapest options are still noticeably more expensive than Shimano Ultegra mechanical or equivalent, and so electronic is simply out of reach for those looking to buy an entry-level or even mid-tier bike.

The reality is that the vast manufacturing costs are tied up in the derailleur servo motors and the rechargeable batteries that run them, and there’s no easy way of bringing that tech down to a truly low-cost level.

For now, Shimano offers its Di2 electronic gearing at Ultegra and Dura-Ace levels (or GRX 810 if you’re looking at gravel), while SRAM also only offers electronic shifting in its two top-tier drivetrains.

You have to charge your gears

Mechanical gearing systems may require occasional tweaking or cable replacements, but you never have to worry about the charge level of a battery. Keeping a check on the battery level is a common downside across all electronic drivetrain systems, and a failure to do so will eventually lead to a challenging ride and an embarrassing story.

The good news is that most electronic drivetrains have long-lasting batteries. Many Shimano Di2 or SRAM eTap users can go months without charging, and it’s easy to check when it’s time to top up the juice.

Traditionally electronic drivetrains add weight over mechanical systems. The lack of steel cables and complex shifting mechanisms inside the brake levers may save weight, but the electric motors and batteries involved often add that weight back in, and then some. The gap is closing, and depending on the bike and gearing setup you wish to use, electronic can be lighter in some situations.

In the case of Shimano, the weight penalty for electronic gearing is now under 100 grams.

Mechanical shifting systems are relatively simple things, and that means you can often fix problems with some basic knowledge and tools. Contrast that with electronic systems which, while even simpler to set up, aren’t so easy to troubleshoot if things go wrong.

Break a gear cable while on a cycling holiday? Chances are you can find a replacement and get rolling again. Pinch an electronic wire on that same holiday? Well, that may be harder to get out of.

Professional cyclists race on electronic drivetrains throughout the season, but once or twice a year you’ll see some of them swap back to mechanical gearing for the cobbled classics (e.g. Paris-Roubaix). This switch is due to the fact that mechanical shifting systems still offer a greater tactile feel and shifting control than pressing an electric button.

Further to this point, it’s quite common for those who live in cold climates and often wear thick winter gloves to prefer mechanical systems. This is because the buttons on Shimano Di2 are located close together and it can be difficult to hit the button you desire. SRAM’s eTap or Campagnolo’s EPS don’t suffer this issue, but then nor does any mechanical shifting setup.

And as a final point on this, mechanical shifting affords the user some direct feedback when actuating a shift. Experienced cyclists will often talk about timing the shift at the lever with their pedal stroke, and even feeling the shift through their hands. In this sense, mechanical shifting is like driving a manual car, whereas electronic is more akin to a semi-automatic with paddle shifters.

The industry is trending away from mechanical

If you follow the CyclingTips team you’ll know that many of us have a personal preference for mechanical systems. The tactile feel, the ease of repair, the value for money – all of this keeps us on clickety gears. But our personal bikes also don’t have overly complicated cable routing paths and many of us grew up spinning spanners in bike shops and are comfortable changing cables at the first sign of a slow shift.

The reality today is that electronic geared systems are the simpler option for most. They’re more likely to work without intervention and let you focus on the ride. And it’s for these reasons that the biggest players in the industry see electronic shifting as the future. Just don’t forget that those batteries need a charge every once in a while.