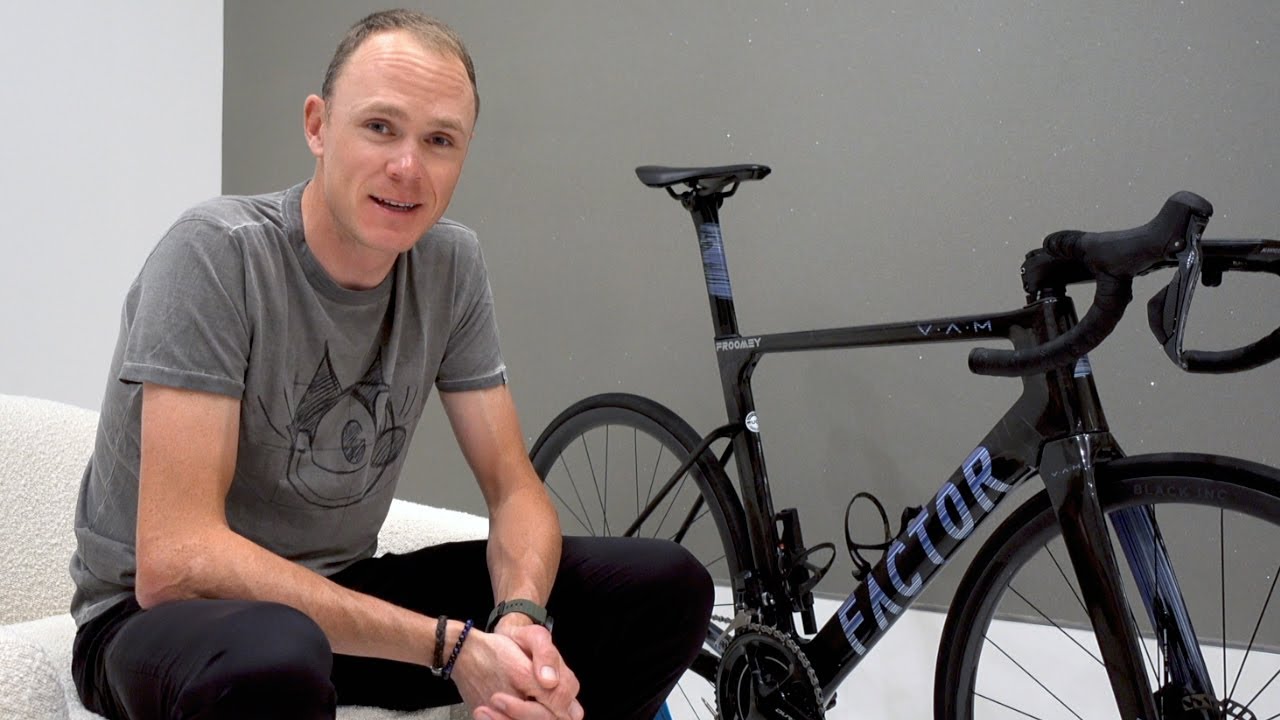 But there's some stuff he leaves out, too

Chris Froome over the weekend kicked off his new side-job as a bike reviewer with a video overview of the Factor Ostro VAM he’s using this season as part of a recently recruited member of team Israel Start-Up Nation. As you’d expect, he’s got a fair bit of praise to share about his new carbon fiber race machine.

“I love the straight lines.”

“I love the power transfer on it; it feels great. Get up out of the saddle, and it feels like the power goes directly through the bike and a propels you forward, which is what a bike is meant to do.”

Taken on its own, what would likely have attracted the most attention from a tech perspective here was Froome’s perhaps unintentional jab at former sponsor Pinarello (whose bikes have nary a straight line to be found). However, what’s far most striking about Froome’s refreshingly frank commentary are his thoughts on disc brakes.

“I’m not 100% sold on them yet myself. I’ve been using them the last couple of months. Performance-wise, they’re great. [They] always stop when I need to stop; dry, wet, they work, they do the job, they do what they’re meant to do. The downsides to disc brakes: the constant rubbing, the potential for mechanicals, the overheating, the discs becoming a bit warped when you’re on a descent of five or ten minutes of constant braking. Personally, I just don’t think the technology is quite where it needs to be yet for road cycling.

Of the barely five-minute video, a full minute and a half are dedicated to his thoughts on discs, and it’s pretty clear he’s being diplomatic with his opinions. It doesn’t take a whole lot of reading between the lines to see that he’s not a fan of them, and it’s perhaps worth pointing out that the praise I mentioned above only comes after the extended critique of his new stoppers (and in comparison, that praise goes on for barely 30 seconds).

To put it bluntly, Froome is not a fan of disc brakes. Not. At. All.

The power of first impressions

Froome is undeniably one of the greatest Grand Tour riders the sport has ever seen, but one could also discount Froome’s technical expertise as far as discs are concerned. After all, he freely admits right up front that after 11 years on Team Ineos (nee Team Sky), this is not only his first time racing on disc brakes, but it sounds like he hasn’t spent much — if any — time on them at all, and so maybe his viewpoints on the matter should be taken with a grain of salt. If you want to nitpick, it’s probably telling that he says “discs and rotors” not once, but twice, when he’s clearly referring to the discs and brake pads.

Whatever, he’s a bike racer, not a mechanic.

One of the things a long-time industry friend told me ages ago is that your first impressions when testing a new product are the most important ones. You start getting used to things afterward, and those differences that once seemed jarring quickly start to fade. It’s something I’ve kept in mind to this day, because it’s true. Along those lines, Froome may very well be a newcomer to discs, but that arguably makes his viewpoints on them more valid, not less.

On the one hand, disc brakes generally do work better in terms of their core functionality. There’s more bite, particularly in wet conditions (and especially when using carbon fiber rims). Fully hydraulic systems require less day-to-day maintenance than traditional cables and housing, and they aren’t as prone to weather contamination, either. They’re more predictable. The lever feel is better. And I’d argue that, for most people, they’re safer.

But on the other, disc brakes are also a lot trickier to set up. The minimal pad clearances mean they’re far more prone to issues with alignment and system rigidity (which includes the frame, fork, wheels, and brake calipers), along with the drag and annoying sounds that go with them. Speaking of sound, they still often squeal when wet. Wheel changes are clumsier and slower. The tight clearances between the pistons and caliper body make them susceptible to jamming if there’s enough contamination. A single drop of errant oil (or even diesel-laden road spray) can kill a set of pads. Bleeds can be messy. And unless you’re willing to make some serious compromises in braking performance, disc-brake bikes are hundreds of grams heavier than rim-brake ones, too.

In other words, everything Froome said (and then some) is true.

Froome’s statements aren’t impactful so much because of exactly the same substance of what he said, but just rather the bluntness, particularly coming from the perspective of a sponsored athlete who’s at least partially bankrolled by industry players with a lot of financial interest in seeing disc brakes move forward.

I still am of the opinion that disc brakes work better than rim brakes on the whole, but while there should maybe be more attention paid (including by me) to discuss the lingering downsides, it’s not like we’ve ignored them, either. Dave Rome published an exhaustive FAQ on the subject not long ago, we’ve complained about them in depth, and frequently field related questions on the Nerd Alert podcast. No question, these things aren’t perfect, and going along with how most of the personal road bikes of the CyclingTips staff are made of metal (at least partially), it’s perhaps telling that we seem split roughly evenly on rim brakes vs. disc. Particularly when just the right combination of calipers, cables and housing, pads, and rim sidewalls are used, modern rim brakes are incredibly good.

That said, I think we also have to keep in mind that rim brakes have enjoyed well over a century of development and refinement, while bicycle disc brakes are still quite new. We also need to remember that as good as rim brakes are, they’re almost certainly as good as they’re ever going to be, and as any dyed-in-the-wool engineer will tell you, “good enough” is never good enough. The next big step that rim brakes would have needed to progress forward is fully hydraulic actuation in place of the old-school cables and housing, and one need only ask SRAM or Rotor/Magura how well that was accepted.

“I accept that [disc brakes] are the direction the industry wants to go,” Froome lamented. “We bike riders are going to have to adapt, learn to use them, and I think if you’re not on disc brakes already, it’s only a matter of time until you’re made obsolete in a way and forced on to them.”

Froome, resigned to our collective fate

So where does that leave us? It’s simple, really. Froome is right, but his comments also leave out the postface on what comes next. Without question, disc brakes need work, particularly on the road bike front. But all of that work is happening, and seemingly quickly. While much of the hype of Shimano’s next generation of Dura-Ace Di2 has centered around its supposedly semi-wireless design, the company has also suggested that the second focus was on improving disc-brake technology such that it’s quieter, easier to set up, and less prone to rub.

I wouldn’t say that there’s any sort of industry-wide “conspiracy” to push everyone on to disc brakes, but it’s at least safe to say that the industry has made the collective decision that there’s not much of a future in rim brakes. Are discs perfect now? Nope, no way. But I don’t think we’re going to have to wait too long before we’re not complaining about them like this, either.