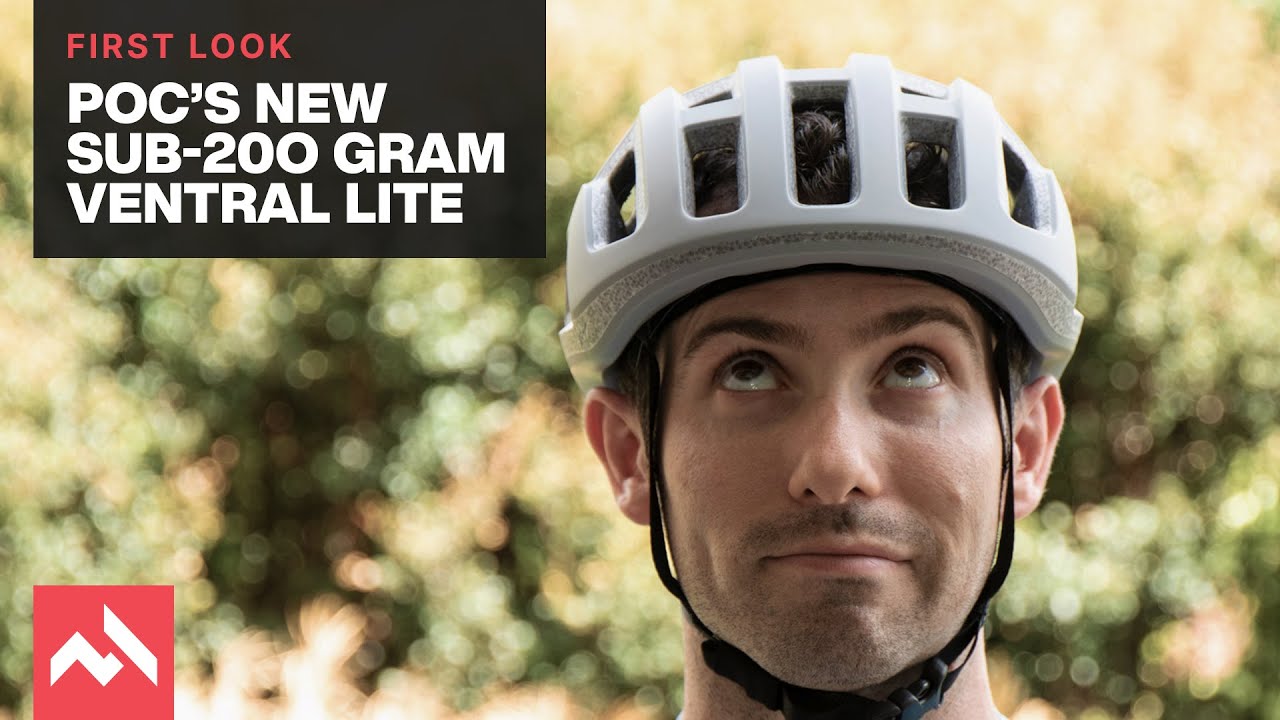 Super light, extremely well ventilated, and very comfortable, but there's no MIPS to be found here.

Swedish brand POC has rightfully earned a reputation for focusing heavily on safety when it comes to its cycling helmets. It was the first brand to offer the MIPS low-friction helmet liner to supposedly reduce the risk of concussions, its helmets often offer more generous coverage than competing models, the brand has regularly pushed the envelope in terms of next-generation safety technology and wireless communication, and there’s often even a wider selection of high-visibility colors so riders can be more noticeable to motorists.

With the new Ventral Lite road helmet, however, POC is taking a different approach. Although the shape and styling are very much still inline with the usual POC philosophy in terms of design and coverage, you won’t find any sort of rotational protection here.

POC’s approach to the Ventral Lite can perhaps be summed up in this quote from product head Oscar Huss: “We strongly believe that the safest helmet is one you choose to wear, one which you always look forward to wearing.”

To that end, POC has adopted the thinking that some riders are still resistant to wearing a helmet at all because they’re either too heavy or too hot, and so the company has focused on making the new Ventral Lite as light as possible, and also as well-ventilated as possible.

Cutting back, with (mostly) minimal compromises

POC clearly took quite a ruthless approach to shaving grams off the Ventral Lite. As compared to the Ventral Air Spin, the Ventral Lite not only uses a lower-density EPS foam, but the polycarbonate microshell is also slightly more sparse in its coverage. There’s a bit more exposed foam visible as a result, especially on the sides toward the rear and around the edges of the vents. POC hasn’t confirmed this, but the Ventral Lite’s polycarbonate shell even seems to be a hair thinner than usual, too.

As a result of all of this effort, claimed weights are genuinely impressive, with a medium CE-approved sample supposedly tipping the scales at just 190 g. The CPSC-approved version is expectedly heavier at 240 g, while the Australian edition falls in between at 230 g.

Impressively, POC hasn’t skimped on its usual generous coverage to hit its weight goals. Whereas many other ultralight road helmets are notably high-cut and leave lots of your head exposed to impact, the Ventral Lite still reaches further down the back of your head for more comprehensive protection in the event of a crash. And while the Ventral Lite’s shell is certainly a little pared-down as compared to the Ventral Air Spin, it’s nice that POC still saw fit to cover the lower edge to minimize daily wear-and-tear.

In terms of ventilation, the general port layout, vent sizes, and internal channeling are all nearly identical to the Ventral Air Spin, too. In other words, there’s a ton of open area on the Ventral Lite, with very deep pathways carved through the interior of the helmet so that air can more easily enter through the front and exit through the rear.

One big omission, however, is any sort of rotational protection, which is particularly notable given that POC was the helmet company that introduced the world to MIPS back in 2009. And in case it’s the sort of thing you care about, the Ventral Lite makes no attempt to be aero, either.

Aesthetically, many casual onlookers would also be hard pressed to tell the Ventral Lite and Ventral Air Spin apart. Even without a single logo, there’s more than enough shared DNA to know that this is a POC lid. If you’re particularly sensitive to “mushroom head”, it’s worth pointing out that the Ventral Lite isn’t exactly the lowest-profile option out there, either. But then again, POC helmets never have been, so that’s no surprise.

As you’d expect given the lofty goals of the Ventral Lite, the cost is inversely related to the weight. Retail price is US$275 / €270 (retail prices for other regions are to be confirmed).

Living up to expectations

Dave Rome and I both received medium-sized samples to test prior to the Ventral Lite’s official release — Dave with a CE version, and me with a CPSC one — and for the most part, POC’s claims seem to hold true.

Actual weights are very close to stated figures, with Dave’s medium CE-approved sample coming in at 200 g and mine registering 258 g, as compared to many higher-end road helmets these days that are often crossing over the 300 g mark. It’s not a huge difference, mind you, but it’s a noticeable one nonetheless.

Ventilation performance has proven to be exceptional as well. Unlike some models that focus solely on flow-through ventilation (which generally only keeps you cool when you’re moving quickly), there’s a lot of airflow here at both high and low speeds, meaning you’re also less likely to overheat when trudging up a steep climb on a brutally hot and sunny day.

Sweat management is surprisingly good, too, despite there not being any obvious mechanisms to divert perspiration away from your forehead aside from three giant openings between the helmet liner and browpad, and a series of small holes in the plastic backing.

“There are no signs of sweat drips down the face, even when I was hunting for it,” Dave said. “That’s not to say it won’t happen, but I haven’t experienced anything obvious in this regard yet.”

However, as we’ve often noticed with non-aero helmets, there’s quite a lot of wind noise to contend with.

The Ventral Lite is also proving to be quite comfortable to wear. That updated retention system may be lighter, but what’s arguably more noteworthy is how it better conforms to the shape of your head than the more plasticky one that POC usually uses.

Similar in many ways to Lazer’s excellent Rollsys system, the new cable-based system still holds tight, but isn’t as likely to pinch anywhere on your skin since it’s so flexible. And although the headform is still more on the oval end of things than round, that added flexibility suggests the Ventral Lite will find a greater percentage of compatible head shapes than other POC models. Dave did find that the actual rear cradle could stand to be a little more flexible, but it was hardly a dealbreaker.

“The only discomfort I got was from the back of the retention system,” he said. “I found that it offered a slightly uncomfortable point that poked me below the occipital bone. Otherwise, this helmet was supremely comfortable to wear.”

The padding covers a decent amount of interior as well, and while I suspect there will invariably be some riders who won’t get along with the fixed-position strap splitters, neither Dave nor I had any issues with them.

Kudos to POC for making the Ventral Lite so widely compatible with various makes and models of eyewear. In addition to being more coddling (particularly on my closely shaven noggin), that cable-based retention system is less likely to interfere with the arms of your sunglasses. Even on sunglass models with especially long arms (such as the uber-popular Oakley Radar EV), the cable is so thin that it’s just not an issue.

As a nice bonus, the forward vents are nicely positioned for tucking in your sunnies if you don’t feel like wearing them, and the grippy appliqués actually do a surprisingly respectable job of keeping them in place, too.

Last but not least, POC deserves some props for the impressively minimal packaging of the Ventral Lite. While it’s commonplace for helmets to be encased in some sort of recyclable cardboard box, POC does one better by also eliminating the usual cubes of non-recyclable foam. It’s a small thing, sure, but small things add up.

Just as POC set out to do, the Ventral Lite is indeed very light, very well ventilated, and very comfortable to wear, all of which suggests that whatever riders are still out there who refuse to wear helmets might find one or two fewer reasons to roll out bareheaded.

That said, it’s hard not to be at least a little confused by POC’s decision to omit any sort of rotational protection, especially given the company’s history of being one of the concept’s biggest proponents. I suppose the logic here was that if someone chooses not to wear a helmet at all because they find it too heavy or too hot, they’re perhaps also less likely to find something like MIPS worthwhile.

In fairness, more basic versions of MIPS liners do actually have a negative impact on ventilation and, to a lesser degree, weight. However, POC’s SPIN viscoelastic pads have minimal impact on both, as does the latest MIPS SL design, and both designs encapsulate the movement entirely within the otherwise conventional padding so there’s no visual impact, either.

Of course, either would have added a few grams to the Ventral Lite’s bottom line, but it also wouldn’t have impacted the helmet’s ability to keep you cool, and it also seems like it would have been more in keeping with the POC ethos.

Along those lines, it’s hard not to draw a comparison between the POC Ventral Lite and the Specialized S-Works Prevail II, the latter of which is just a handful of grams heavier, virtually the same cost, and provides almost indistinguishable ventilation performance while also incorporating MIPS SL padding and a supposedly pseudo-aero shape.

Is saving a handful of grams a sufficiently worthwhile reason for POC to abandon its long-standing commitment to MIPS and similar technologies, when the two seem so inextricably linked?

I’m not so sure, but ultimately the market will decide.

More information can be found at www.pocsports.com.