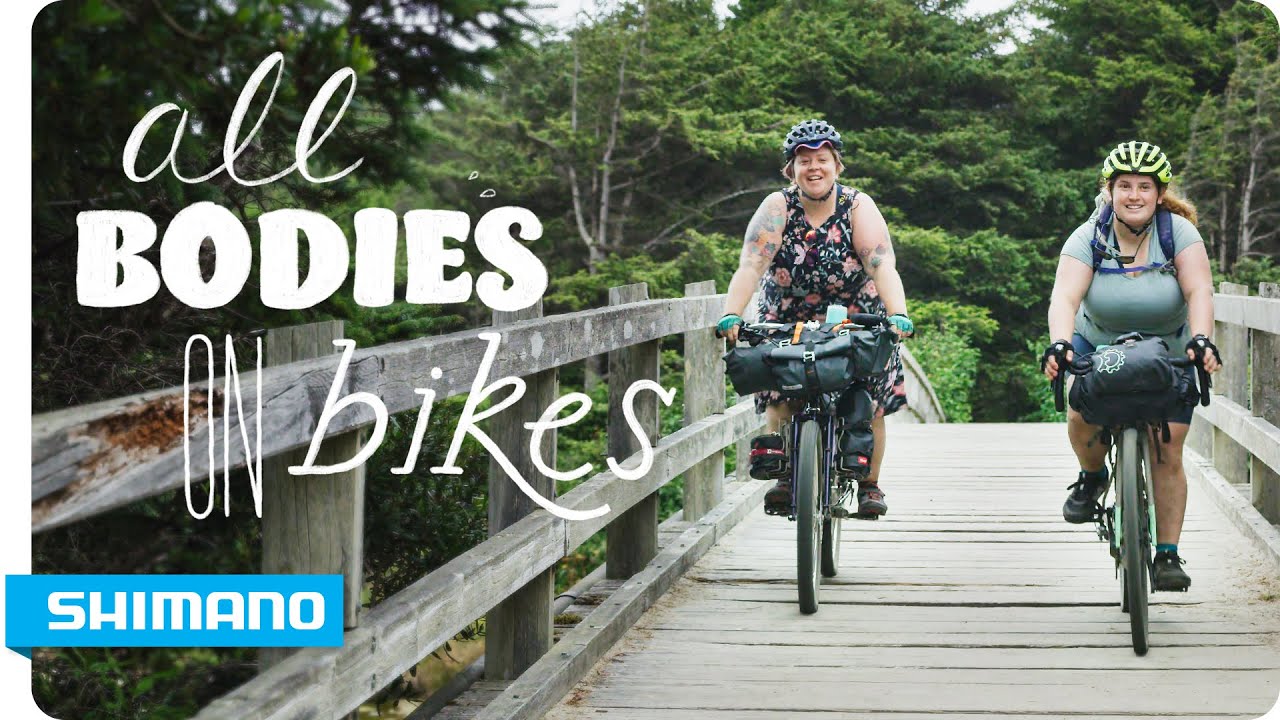 ‘All Bodies on Bikes’, a film about body inclusivity and the cycling community

Kailey Kornhauser and Marley Blonsky want to change the perception of who is a 'bike rider'. In their film, they discuss societies obsession with weight and why they are reclaiming the word fat without its negative connotations.

Obsession with weight is not something exclusive to the cycling industry, but cycling does have a problem when it comes to inclusivity within its space.

All Bodies on Bikes is a Shimano Original film that follows Kailey Kornhauser and Marley Blonsky on a multi-day bike-packing trip from Corvallis, Oregon to the coast. Along the way, the two discuss their experiences of having bigger bodies and riding bikes.

When Marley was at the WTF Bike Explorer Summit, now called Radical Adventure Riders, she “off the cuff” started the conversation of being a large-bodied rider. Around the same time, Marley discovered Kailey on the internet, while Kailey was riding across Alaska for Lael Wilcox’s Alaska Scholarship project. The two were already fan girls of each other and decided to work together on a workshop at the Bike Explorer Summit.

The film ball started rolling when Marley and Kailey went to the American Bicyclists National Conference in Washington, D.C. and a friend of Kailey’s approached the two about putting their story in front of a larger audience. After that, Shimano signed on to help.

“Shimano was always looking for opportunities to share people’s stories about bikes, and so the filmmaker for this film came across Shimano screen and we just started talking to them and realized that this was something we really wanted to get behind,” said Kristen Legan. “It’s a story we really wanted to help share. It’s definitely their story and we’re just happy to be a part of it”.

Marley and Kailey dive into issues such as growing up fat and disordered eating. In their workshops, they discuss removing words that are associated with judgement, for example calling a ride a beginner ride instead of highlighting the speed of the ride. They believe it’s important not to assume someone is a beginner because they ride a certain pace.

Most importantly, they advocate for cycling as something anyone can do, regardless of their size or their ability level. “We try to approach biking from a place of joyful movement and doing it because it’s fun and feels good and not as some source of punishment to change ourselves,” Kailey explained on the Freewheeling podcast.

In the film Marely and Kailey talk about taking back the word ‘fat’, reclaiming it not as an insult but as a descriptor, like short or brunette. “For me, as a kid, my sister would call me fat all the time, kids on the playground, whatever it was. So as an adult, being able to reclaim that and use it as a neutral descriptor,” Marley explained. “It’s a very small part of who I am and I try not to make a big deal out of it. It’s become so weaponized in our culture that I think by putting it out there and saying I’m a fat woman, it really takes the power away and then you can’t insult me with that”.

“We associate fat as neutral and then also fat as we’re celebrating our bodies and they are fat. So we’re trying to reframe it and take away some of those assumptions that people make about people when they call them fat,” explained Kailey. Marley added, “because they do these cool things, they climb mountains, they go swimming, they have badass tattoos. My body is cool”.

Marley and Kailey are celebrating their bodies by riding bikes because bikes are fun, they are practical, and they are an affordable mode of transportation.

“I feel like the cool kids ride bikes and when I was selling my car, I would see these, I guess they were hipsters, riding, I live in Seattle, around. I’m like, I want to do that, how do I do that? And I’m going to be honest, I always wanted to be one of the cool kids,” said Marley. “I felt like the bike was my entry ticket into that world”.

In addition to the adventure bikes offer, they come with a community of like-minded individuals that can be found all over the world. In addition to the hard conversations, this film is a story of how bikes can bring people together, and how supportive the cycling community can be.

Alongside the film, they have created a guide with additional information to help discuss the topic of weight.

I also recorded a special Freewheeling episode with Marley and Kailey. We chat about the film and their mission, along with what they want to do next.

#All Bodies on Bikes
#Shimano