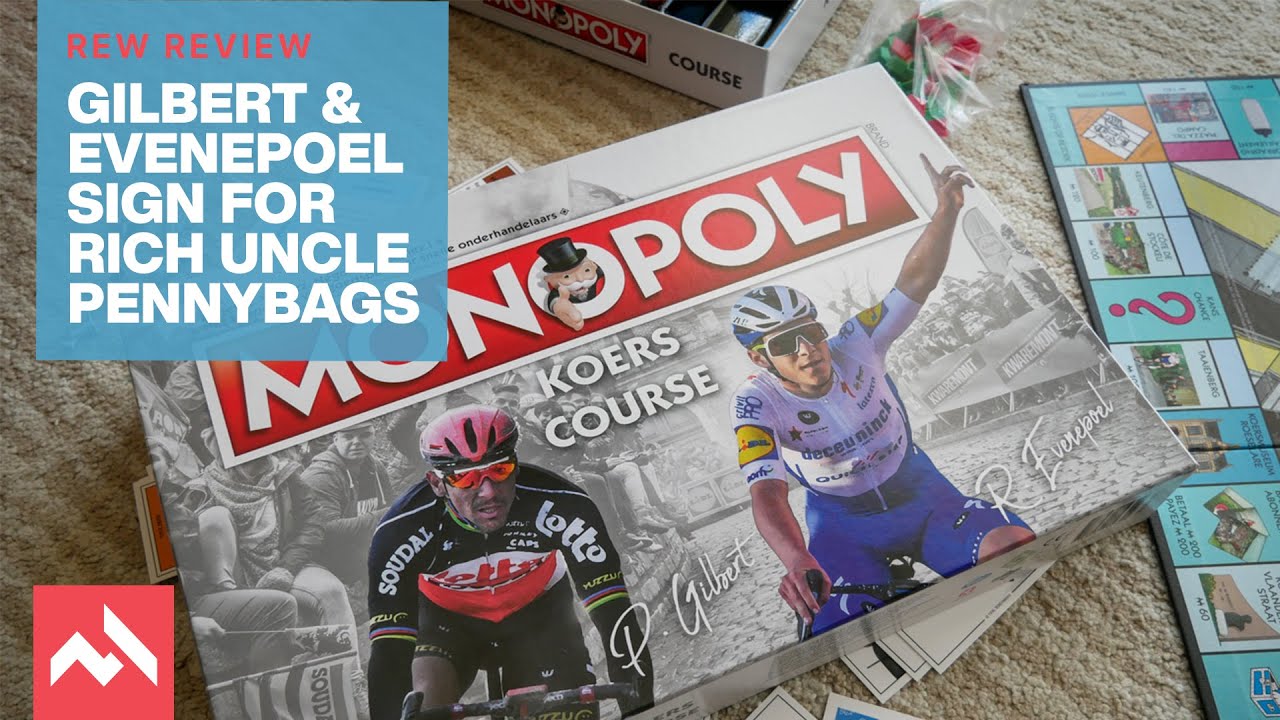 Rich Uncle Pennybags signs Gilbert and Evenepoel. Not to any old team, but to Hasbo's latest edition of Monopoly. And we unbox it!

Don’t you love it when you grab that winter coat you haven’t had to use in months, put it on, slip your hands into the pockets and find a nice crumpled five quid, ten dollars, five euro note? Sure, it doesn’t happen too often, but it’s a nice surprise, one you weren’t expecting.

Well, that’s how I felt last week when I had a delivery. For the life of me, I couldn’t work out what was inside. I hadn’t ordered anything (that I was aware of) and didn’t have any test items due for delivery, so it was a mini-mystery. Or at least until I opened it up.

All-in-all, we know what to expect. Bike places in place of Pall Mall, Euston Road and Old Kent Road. But what iconic race locations were going to be brown? Which races would get the converted big bucks blue treatment? And who would appear on the box cover? Would it be a pic of that little moustached, top-hatted man on a bike, or would they rope in some megastars of cycling (spoiler, they got the same rider who’s just signed on as the face of Pizza Hut)?

The thing that amazes me more than Rich Uncle Pennybags signing Gilbert and Evenepoel to front his latest Monopoly edition, is that there are sponsors involved too. Big brand names. It doesn’t have some fake cartoon-ish brands that look kind of familiar but are clearly rip-offs of famous brands, Instead, they’ve roped Lidl, the grocery chain, Soudal, BCool and even Castelli.

All joking aside, it just shows you how huge cycling is in Belgium; I can’t imagine a cycling Monopoly getting the nod in many countries. Would this have sold even better if they’d got it out while everyone was stuck at home trying to while away the hours in lockdown or entertaining the kids in between homeschooling, we will never know…I hope.

This week’s video isn’t a usual review at all, it’s quite simply a “geek-out” at a product that put a huge smile on my face, one I wanted to share. Will it get me to play Monopoly a bit more? Probably, as I haven’t owned one since I was a kid. Anyway, I’m off to see if I can avoid prison and buy Roubaix velodrome.