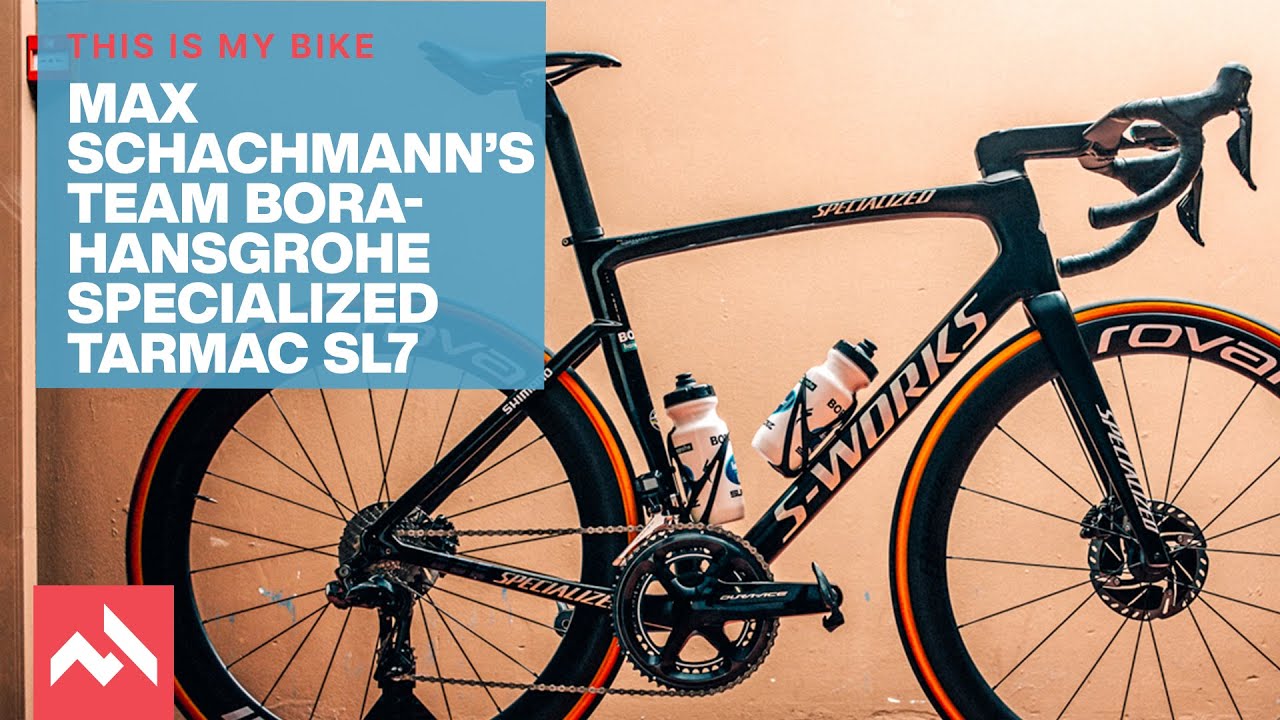 A look at the bike of the now two-time Paris-Nice winner.

Hands up if you had the privilege of watching Sunday’s final stage of Paris-Nice? If you missed it, well, you missed out on an absolute belter of a stage. Then again, you very well may have the excuse of being glued to stage five of Tirreno-Adriatico, which was equally nail-biting. All in all, it was a classy weekend of racing.

Paris-Nice threw up a winner in a breathtaking final stage; it also delivered us the first back-to-back general classification victory since 2002. The winner was Bora-Hansgrohe’s Maximilian Schachmann, or Max to his mates.

Two days before Schachmann departed to defend his title, I managed to catch up with him. Yes, we spoke a bit about the upcoming race, but like all these videos in the My Bike series, we stuck to what he’s riding. In this case, his team-issue Specialized Tarmac SL7.

Halfway through the 2020 season, all of Specialized’s sponsored teams, including Boels–Dolmans, Deceuninck-QuickStep, and Bora-Hansgrohe, got their grubby mitts on the new updated model of the now all-round race bike. And by the sound of things, from what Max is saying, it wasn’t just the old Tarmac SL6s that were put out to pasture. The fleet of Specialized Venges, the brand’s pure aero bike, was too. The reason, as you may be aware, is that the SL7 gained a big dollop of aero gains, so much so that it kind of made the Venge redundant.

In the video above Max talks me through his bike, and as always, I got the freshly crowned double Paris-Nice champion to shoot his own bike, and I’ve got to say he’s pretty handy with the camera.

Even though the pandemic interrupted a stellar season for Schachmann he still won Paris-Nice and had other notable results including a third place at a stiflingly hot Strade Bianche. He also used the “home time” that the pandemic offered to learn a few skills that he otherwise wouldn’t have had time to. Yep, with a new bike, no mechanics or bike shops on hand, Max turned to YouTube and learned how to bleed a disc brake.

Schachmann’s Tarmac is kitted out with a full Dura-Ace Di2 groupset. Gear ratios differ on his training bike and racing bike because, as we find out, he’s a fan of his knees! Wheels are from Roval and with a wide choice of tires on offer from Specialized, Schachmann opts for his preferred Turbo Cottons in 26 mm. To find out if he uses tubular, clinchers or tubs, well, I’m going to force you to watch the vid. You may be able to work it out as Max isn’t quite sure himself.

One major change for the team, and one that seems quite a surprise, is that bars and stem this season are from Shimano’s in-house brand Pro. This is a big change from seasons past when the team used Specialized’s own and, for the most part, proprietary components.

But the team still sticks with Specialized saddles. For Max, well, he clearly has expensive taste, opting for the Power Mirror saddle – a $450 3D-printed perch. It’s lucky he doesn’t have to pay for it. I’ve got to admit that I can understand why he likes the saddle. As I mentioned in my recent review it’s quite possibly the comfiest place I’ve put my derriere while riding.

Chatting with Max in the lead-up to him defending his title at Paris-Nice was a privilege. I’m sure he could have used his time more constructively. So, I’d like to say a big thanks to the now double Race to the Sun winner for his time.