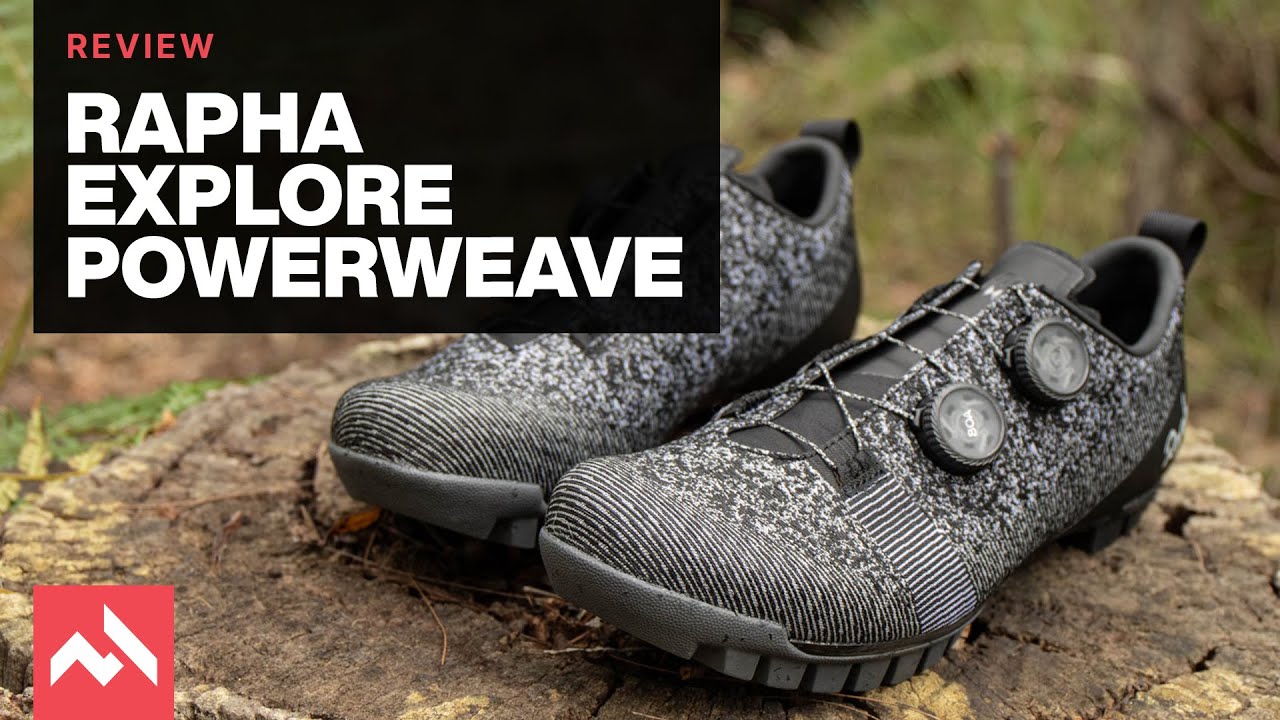 Rapha's new Explore Powerweave gravel shoe offers superb comfort, a sense of luxury and a great first impression. How does it hold up?

Two years ago, Rapha took its first unaided steps into the cycling shoe category. In the past, the British company had a long history of footwear collaborations with Giro, but the launch of the lace-up Explore gravel shoe and Classic road shoe represented a clean slate.

There were some wobbles on the way, and the Explore, while promising, wasn’t an unmitigated success – as I found through an extensive long-term review published early last year. But the Pro Team road shoe, which followed soon after, showed impressive signs of evolution, along with some fancy woven uppers that all but eliminated the fit quirks of the Explore – despite the two sharing the same fit.

Now, almost two years from the debut of the original Explore, Rapha has released a new gravel shoe – the Rapha Explore Powerweave – which is pretty much what you get if you cross the Explore with the Pro Team.

Happily, that’s a very good thing, as three of us – James Huang in Colorado, Dave Rome in Sydney, and myself in Melbourne – discovered after testing the shoes for a few weeks pre-release date. Dave’s got the perspective of having ridden most of the high-end SPD shoes on the market, James is James, and I’ve spent many thousands of kilometres in both of Rapha’s other shoes, so we feel that we’re bringing a lot of experience to the table with this review. I’m taking the lead, James helmed the video (up top) and both James and Dave have provided feedback on what they like and what they don’t.

So, with that out of the way, there’s a handsome new shoe from Rapha. After first breaking cover when ridden by Lachlan Morton on one of his bonkers rides last year, the Rapha Explore Powerweaves are finally available for purchase for RCC members immediately, with general public sales to come two days after. They come in blue or black at a somewhat gasp-inducing pricepoint, and they are absolutely bloody lovely.

Woven uppers are a growth area across footwear – both casual and cycling-specific – and Rapha’s take on the format is one of the most refined examples yet. For the Pro Team shoes, the company worked with textile technologists Avery Dennison to create the proprietary fabric “engineered to deliver strength where needed” for “a form-fitting and virtually seamless upper”, and with the Explore Powerweave they’ve taken that template and given it a makeover.

The Explore Powerweave features a newly developed version of the material, reinforced with a thermoplastic urethane (TPU) yarn for extra durability. According to Rapha’s Accessories and Hard Goods Design Manager, Jon Freeman, “the TPU yarns are much more resistant to abrasion and wear than the Polyester. They make up 50% of the upper and are larger in diameter than the polyester yarns; this means they stand proud of the polyester yarns and become the leading surface of the shoe, increasing its durability and resistance to snagging from foliage and branches.”

While the original Powerweave upper featured a durable water repellent (DWR) treatment, the addition of the TPU yarn on the Explore adds water resistance due to its non-porous nature. Don’t expect a miracle here – your feet will still get wet in the rain, and the insoles and inside of the tongue are more prone to retaining dampness, but at least the uppers of the shoes dry relatively quickly.

The upper is also softer and more readily-conforming than the Powerweave blend used on the Pro Team shoe, offering a sock-like fit that adapts to irregularities in the foot shape whilst retaining structure, and according to Rapha it will resist stretching out over time. It also breathes pretty well, and during my late summer testing was conspicuously less humid than the other shoes in my rotation.

The Explore Powerweaves launch in two colour schemes – a stealthy black with white detailing, and a classy navy blue with an orange logo on the heel and a two-tone black/tan sole.

Those snazzy uppers are paired with dual Boa dials, featuring the low-profile, muck-resistant new Li2 design. These are terrifically tactile, less coarse-feeling than the previous line-topping IP1 dial from Boa, and help cinch the upper in across three looped eyelets. Rather than a plastic wire, in this case it’s a colour-matched textile thread.

The fit of the Explore Powerweaves is, according to Rapha, the same as the original Explore – as was more or less the case with the Pro Team road shoe – but there is an outsized influence on the perception of the shoe’s fit due to the upper. They retain the parts I liked about the fit of the original Explore – noticeably the sense of roominess and security – while improving walkability, comfort, breathability and heel-hold. Fit’s a personal thing, but for all three of our testers, this was a home run.

The shoes are supplied with the same adjustable insoles that are used across Rapha’s entire footwear range, which is a luxurious-feeling microfibre insole supplied with interchangeable arch support. There are three positions – High, Medium and Neutral (which is without one of the supports fitted) – which should help cater to a range of different physiologies. They are fairly non-intrusive, even in the highest setting (which I opted for) and those who are coming from the likes of a pair of Bonts, Specializeds or custom insoles like G8s may find them a bit soft. But at any rate, they’re far from the worst cycling insoles in the world – and this is a particularly personal aspect of any shoe’s fit – so you may be entirely content.

The sole directly carries over from the original Explore, which is – for the most part – a very good thing. It features a natural rubber tread that provides outstanding grip and lasts extremely well, with negligible wear on my original Explores despite two years of not particularly gentle treatment. Of the four pairs of SPD shoes in my rotation, Rapha’s tread is by far the most impressive. New to this iteration is a two-tone black/tan colouring of the sole on the navy blue version of the shoe; the black colour scheme is black with grey.

The sole is also supremely comfortable, with remarkable walkability for a performance-oriented carbon-soled shoe, only rivalled in my experience by the Quoc Gran Tourer. There’s a glossy carbon plate at the cleat but it doesn’t run the full length of the shoe, stopping just before the toe and the heel and giving perceptible flex to enhance comfort off the bike. To give a comparison point, they have the walkability of something like Shimano’s well-loved XC5, but with the performance, rock-free stability and outright efficiency of a Shimano RX8. I struggled with heel rub on the lace-up Explores, but that was much less of an issue with the Powerweaves, only becoming evident on long walks.

The design of the sole has the side effect of giving a surprisingly natural gait for any hike-a-bike (or munch-a-brunch) segments of your ride, although the blocky tread can get a bit gummed up in slippery clay or earthen climbs and there’s no provision for toe spikes. That’s arguably a fringe use case for what is ostensibly an all-road/gravel-leaning adventure shoe, but regardless, if you spend much time needing to hike through gnarly terrain, consider yourself warned.

The cleats screw into a blingy rainbow titanium cleat plate that looks flash and has an alluring je ne sais quoi in the shoe’s spec-list. In reality, I’ve got mixed feelings about it. It’s a minimal gram-saving exercise in a particularly high strain area, and I think it’s telling that Rapha now ships the shoes with a prominent sticker giving a 6 Nm torque recommendation. The first iteration of the Explore didn’t come with any such advice, and at least one CyclingTips reviewer (hi!) and a couple of CyclingTips commenters ended up stripping threads.

It’s nice that Rapha appears to have tacitly acknowledged that there might be a problem here, but regardless, I find myself questioning the wisdom of using a less robust material here when a steel one would probably hold up better (albeit with the risk of rust).

I haven’t run into any such issues with the Powerweaves over a few weeks of pre-launch testing, but I anticipate that I’ll certainly be using them enough to uncover any issues – as was the case with the original Explores, which I faded from hot-pink to salmon, and the Pro Team road shoes, which are my preferred road shoe whenever I stray from SPDs.

With the Explore Powerweaves, Rapha has produced the most comfortable cycling shoe I’ve ever worn – and James and Dave were similarly impressed. But while comfort is the #1 most important aspect of a cycling shoe, there are other factors to consider, and that’s where they might hit a bit of a snag.

While I’m far from a weight-weenie myself, I’m reliably informed by both Dave and James that the Powerweaves carry a bit of a weight penalty compared to many of their competitors. A pair of size 43 shoes weighs in at 713 grams for the pair, which is over 100 g heavier than a pair of S-Works Recons, and surprisingly also around 30 g heavier than the lace-up Explores. For some riders – myself included – that matters not one iota, as long as they’re comfortable, which these shoes undoubtedly are. But for gravel racers looking to trim every last gram for a race-day advantage, it’s worth flagging.

More significantly, I’ve got concerns about the durability of the upper. On my very first ride in the shoes, something grazed the toe innocuously – perhaps a branch or a blackberry vine – and the fabric frayed, breaking the TPU yarn and scuffing the surface. There was nothing that registered as an impact, and it wasn’t even an arduous ride, taking in a selection of tame urban singletrack within a few kilometres of home to clear my head at the end of a work-day. The ordinariness of the incident that caused this kind of material damage gives me pause, and makes me wish that Rapha had included a bumper or a plastic guard across the toe of the shoe, just as it could do – and indeed, already has done at the heel.

I’ll concede that I might just be unlucky – and indeed, I’ve had no repeat damage to the shoes since that debut outing – but it makes me a little hesitant to unreservedly recommend these shoes. Which is a shame, because they are the most natural-feeling cycling shoes I’ve ever worn. They disappear on the feet, provide sneaker-like comfort, look good and perform superbly. But they’re also an expensive pair of shoes that you’d hope would last, particularly because they’re so excellent in so many respects.

I want to wear them for every ride, indefinitely, but I have my defences up because I don’t yet know whether they’re here for a long time, or just a good time.