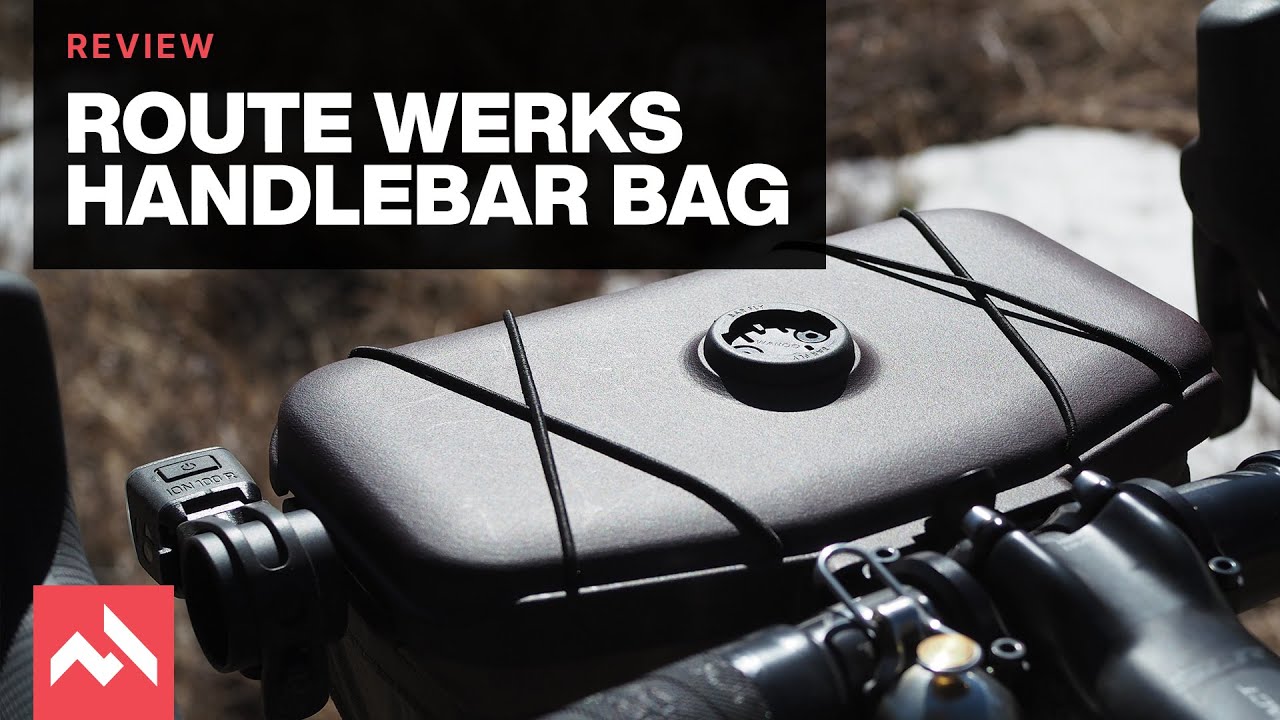 Route Werks made quite the splash when it launched its Kickstarter campaign back in September with this handlebar bag. As it turns out, it seems to be as good as it's made out to be.

Fantastic stability, clever shape, mounts for all of your stuff, and a super-handy flip-top lid

Route Werks made quite the splash when it launched its Kickstarter campaign back in September with this handlebar bag. As it turns out, it seems to be as good as it's made out to be.

Once solely the realm of touring bikes, handlebar bags are enjoying a massive renaissance as of late thanks to the rise of gravel/adventure bikes and bikepacking, to the point where seemingly every soft-goods brand in the industry can’t make them fast enough. One of the most attention-grabbing bags to hit the scene recently comes from upstart brand Route Werks, who smashed through its modest Kickstarter crowdfunding goal this past September, and has generated so much hype that dozens of copycats and scam outfits have popped up in an effort to piggyback off of the company’s success.

Route Werks is only just now starting to ship bags to Kickstarter backers, but I’ve had a preproduction sample for the past month and a half. And I dare say that this is one of those rare occasions when the hype lives up to reality.

Although there’s a wealth of options when it comes to handlebar bags these days, there aren’t actually a huge number of fundamental differences between most of them. More often than not, what you’re getting is some variation of a Cordura nylon shell with some straps to attach it to your bars, perhaps some plastic stiffeners, maybe some pockets inside and/or outside. Oh, and colors. Definitely lots of colors.

Sizes and shapes vary a fair bit as well, of course, but by and large, there’s not a ton of variation.

By contrast, the Route Werks handlebar bag feels like it was designed more like a piece of equipment rather than a soft-sided accessory.

What’s most likely to catch your attention is the hinged hard-shell top. It flips forward for easy access to your stuff, quickly latches back down, and up top is a shallow socket that accepts inserts from Bar Fly, K-Edge, and Quad Lock so that you can directly attach a wide variety of GPS computers and phones, right in your line of sight.

That aluminum ring frame also provides a sturdy bolt-on mounting point for up to two accessories — one on either side — such as lights and bells.

Helping to keep everything organized are four internal and two external pockets, and if you happen to max out the 3.2-liter internal volume (but not the 4 kg / 9 lb total weight capacity), there are shock cords on the top, sides, and bottom so you can attach yet more stuff.

Although Route Werks doesn’t intend for this to be fully waterproof like a proper roll-top dry bag, it’s still claimed to be “weather-proof”. Attaching the whole thing to your bars is a machined aluminum quick-release mount with dual handlebar clamps for use with bars up to 31.8 mm in diameter.

Claimed weight is 684 g for the bag and handlebar mount, and unless you were fortunate enough to get in on the Kickstarter deal, retail price is a rather heady US$179 (pricing for other regions varies by exchange rate).

Lives up to expectations

It’d be fair to say that there’s a surprising amount of excitement surrounding the Route Werks bag, especially considering that it really wasn’t all that long ago that handlebar bags were decidedly uncool among the enthusiast drop-bar crowd. But if you count yourselves among the 1,700+ initial backers of the project on Kickstarter and are still waiting for your bag, rest assured that it’s as good as you’re hoping it would be (and that bags are actually starting to ship now).

First and foremost, the hinged lid format is remarkably convenient, particularly if you like to access your stuff on the go. I regularly grabbed snacks without having to break my cadence, for example, and the huge opening provides far easier access than what you get with zippers. The latch is secure, but yet it’s still a cinch to open or close with one hand. And since the computer mount is integrated directly into the lid, you don’t have to worry about a conventional out-front mount getting in the way.

On paper, the 3.2-liter capacity isn’t massive (although it’s still a lot bigger than what you get with most burrito-style bar bags). However, the squared-off shape — plus that huge opening up top — makes the space a lot more usable than most bags of similar volume. I regularly stuffed a mirrorless camera body and lens in there, along with a light jacket, full-fingered gloves, knee warmers, and a couple of hours’ worth of snacks. Even better, digging certain items out didn’t always require taking everything else out in the process.

All of that volume and mass are held very securely thanks to that rigid internal aluminum frame and sturdy aluminum quick-release handlebar bracket. I didn’t ride any differently when I had the Route Werks bag fitted than I normally would, and even over fast and rocky local trails, the whole thing stayed reassuringly put.

The bag’s smart shape also pays dividends for your hands. Especially when combined with the fact that the handlebar mount offsets the bag slightly further forward than usual, I found there was plenty of room for all my usual hand positions, even when wearing full-fingered gloves and with the side accessories mounted — and keep in mind that I run rather narrow 40 cm bars, so riders who use wider ones will have even more room. As far as your hands are concerned, it’s almost as if the bag isn’t there at all, which I most certainly can’t say about just about every soft-sided bar bag I’ve used in the past.

Riders seeking the ultimate in weather protection might be disappointed that the Route Werks isn’t truly watertight like what you’d maybe find in a proper roll-top dry bag, for example. However, the shape of the lid acts like an umbrella, and the way it overlaps the upper rim of the bag makes it a little harder for water to get in. Down below, the entire Cordura body is given a DWR urethane coating so while Route Werks makes it clear that you can’t submerse the bag and still expect your stuff to stay dry, using the bag in typical rainy conditions shouldn’t be a problem.

Truth be told, it didn’t rain once during my test period with the Route Werks bag, so I can’t personally attest to the veracity of that claim. But I did wash the bike I used it on several times with the bag still attached, and my gummy bears stayed blissfully dry even though I wasn’t being particularly careful with how I was spraying the water. Take that as you will.

Plenty of people will balk at the asking price for this thing, but Route Werks at least builds this thing for the long haul. The modular design is held together with threaded bolts instead of cheaper rivets, the shock cords can be easily replaced if and when they lose their stretchiness (or you just want a different color), and the dovetail-style quick-release mount interface is adjustable for wear. Route Werks plans to keep individual parts on hand so something as trivial as a cracked lid won’t render the whole thing useless.

Generally speaking, nearly everywhere you look there’s clearly been a lot of attention paid to the details.

For example, the interior lining of the bag features a contrasting white grid stitch pattern so that your stuff doesn’t get lost in a sea of blackness. The interior pockets have big finger-friendly loops so you can more easily pull them open when your hands are frozen. The single zippered pocket inside the lid has a finely textured pull that’s oddly grippy.

If you want to want to bring the bag inside with you during a rest break, Route Werks includes a shoulder strap. And if you don’t want to use the bag at all — but still want to attach your computer or phone — the company has a separate device mount pending that uses the same handlebar clamp.

Naturally, there are some downsides to all of this smart design and functionality.

For one, this sucker is a seriously dense little brick of a bag. To be fair, my test sample was a preproduction item with a 3D-printed plastic lid instead of the molded polycarbonate one of the final production version. As such, it was particularly heavy at 750 g (including the handlebar mount, but without any side accessories). Route Werks has already sent me photo verification that production bags are hitting that 684 g claimed target, but even so, that’s a fair bit of weight  right up front — and that’s before you put anything in the thing.

It’s safe to say that weight weenies probably aren’t going to be putting a bar bag on their bike, anyway, but even riders that aren’t particularly gram-conscious will have a hard time not noticing the extra mass.

The lid on my sample also rattled a bit, which I eventually squelched (mostly) with a couple of bits of self-adhesive felt. Route Werks has promised that production lids don’t rattle like this one, but nevertheless, a hard plastic lid like this is always going to be prone to more noise and reverberation than a fabric one, and it could potentially be particularly annoying depending on what you have inside. My sample never got to that point, but it’s something to keep in mind.

If I really want to nitpick, I like that the quick-release mechanism on the mount is adjustable for wear, but I’d also like to see a separate cam carrier (something made of brass would be ideal) so that the lever doesn’t continually dig into the lower dovetail plate over time.

Finally, riders interested in using one of these will want to make sure it’s compatible with their handlebar. Route Werks doesn’t provide a ton of guidance on this topic, but it seems logical that most aluminum bars should be ok, as well as carbon ones that are approved for bolt-on aero bars. Either way, it’ll be best to confirm with the bar manufacturer.

Still headed down the straight and narrow

It’s exceedingly rare that I come across a product that strikes me as leaving no room for improvement, and the Route Werks handlebar bag is no different. It’s heavy, it’s expensive, there’s that potential for noise.

But the stability makes it easy to forget about the weight, it’s never loud even if it doesn’t make some noise, and while it’s definitely expensive, I’m not sure it’d be fair to say it’s overpriced given all that’s gone into it and how long it should last.

I’ve got quite a few bar bags at my disposal these days, and pretty much all of them are substantially more affordable and way lighter. But when all is said and done, this is the one I keep finding myself using, and that’s perhaps the only quality that matters.