As it usually does, the race came down to the final trip up the steep ascent of the Mur de Huy, where the pre-race favorites battled for position on the lower slopes before Roglic launched a powerful move with a little over 300 meters to go. He surged ahead to a decent gap as Alaphilippe and Valverde moved to respond a few bike lengths back.

Roglic held on out front for another 200 meters but Alaphilippe steadily closed down the gap on his own and then pulled even. The pair were closely matched over the last hundred meters, but Alaphilippe pulled clear as the line approached to secure the victory. Roglic settled for second on the same time with Valverde arriving six seconds later to claim the final spot on the podium. 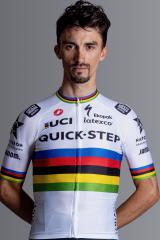