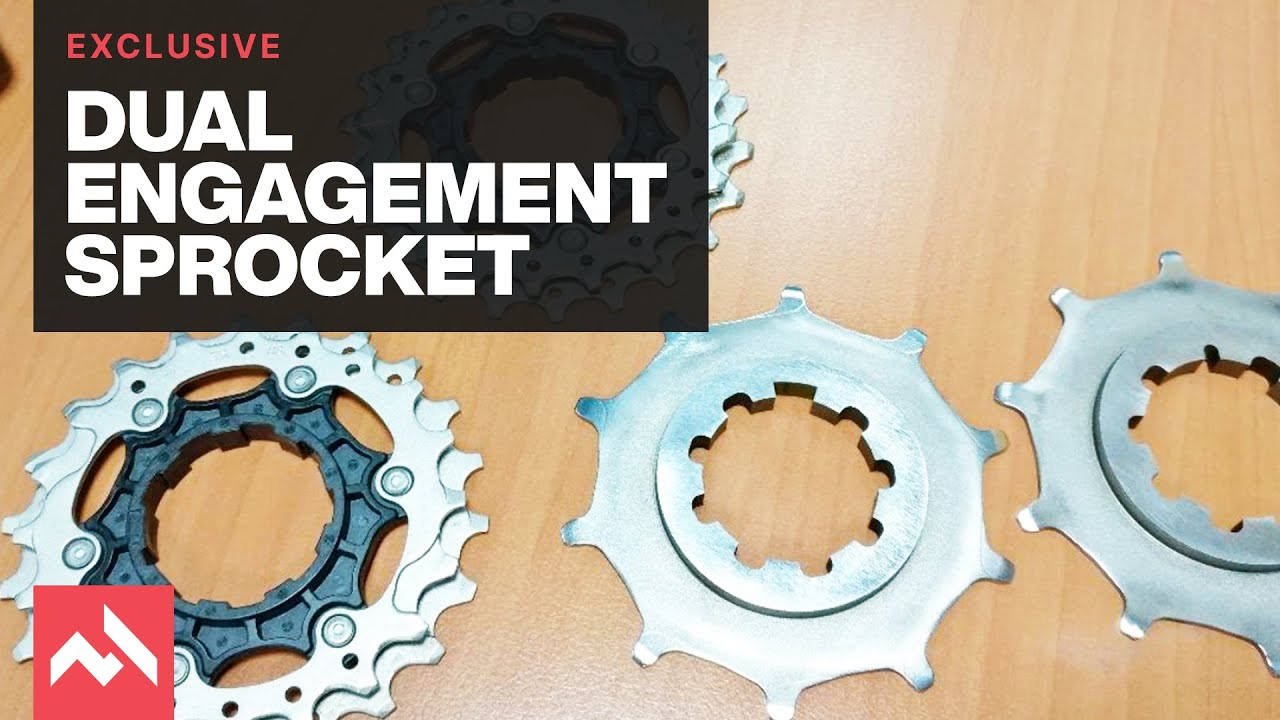 Exclusive: First the chain, now the sprocket – New Motion Labs are at it again

Remember that chain? New Motion Labs are at it again with a redesign of the sprocket.

In November of last year, New Motion Labs (NML) made waves when it announced its Link Drive dual engagement chain which was said to be more efficient and durable than a traditional roller chain. The claimed benefit of the Link Drive chain is its dual engagement action and the claimed efficiency and durability gains that this engagement offers.

NML has continued the development and testing of that chain design, however. Not content with reinventing the chain, NML has been busy radically redesigning the other key parts of the bicycle drivetrain, namely the sprocket and chainring. NML has now announced a new sprocket tooth profile that forces the same dual engagement action on a standard roller chain.

NML claims this new design offers efficiency and durability increases in a similar manner to their Link Drive dual engagement chain set up, but using the traditional roller chain. In fact, NML is claiming up to a 1% improvement in drivetrain efficiency and up to a huge 30% increase in drive lifetime, plus a reduced weight as a result of halving the number of teeth on the sprocket and chainring.

The Enduo Evolve sprocket will be available only in single-speed to start, with pre-ordering scheduled to start in May. However, NML has confirmed that it is working on a version for multi-speed drivetrains and is already working on prototypes for rider testing.

While the Link Drive chain design provides this dual engagement action, it does present some hurdles, not least of all compatibility with current drive trains. The Link Drive will require specific chainrings and sprockets. However, during the process of designing the Link Drive, NML made a number of discoveries and spotted the opportunity to force the same dual engagement action on a traditional roller chain setup with a redesigned tooth profile. Replacing sprockets and chainrings is less of a challenge than replacing the whole drive train, especially on track racing or single speed bikes.

This new Enduo Evolve sprocket tooth design forces the rollers of a roller chain to act in pairs. Each pair of rollers engages with an individual tooth, making contact on both sides of the tooth, at radially offset positions, or as NML refer to it, Dual Engagement.

The sprocket’s design is noticeably different from that of a traditional sprocket design, with fewer and wider-profiled teeth. These redesigned teeth are said to force the dual engagement action on a traditional roller chain, and NML are claiming this results in a 1% efficiency gain compared to a Shimano sprocket at 400-900watts.

NML points to a number of features that result in these improvements in efficiency and durability. These include the prevention of relative movement and related friction, reduced articulation losses, and higher efficiency throughout the lifetime of the drivetrain.

Furthermore, NML aims to allow users to adapt drivetrains to their requirements, meaning that if a rider is primarily focused on efficiency for competition events, they can choose to engage the Evolve teeth with the outer links of the roller-chain to further increase efficiency. On the other hand, by engaging the Evolve teeth with the inner links of the roller-chain, Enduo will promote even greater durability.

New Motion Labs engaged the UK based and independent National Physics laboratory (NPL) to conduct testing on the Enduo Evovles efficiency improvements. The testing looked at the efficiency of the new Enduo Evolve sprockets as compared to a Shimano CS-R8000 sprocket and used a Dura-Ace CN-HG901 11 speed chain. For the actual tests, two Shimano 20-tooth and Enduo 20-tooth equivalent sprockets were used and laterally aligned with the centre distance set to allow for some slack in the chain. Each test lasted approximately five minutes and the timing between tests was standardised to remove any impact of temperature changes.

I asked NML why two 20-tooth sprockets were tested, rather than a small. The answer: large sprocket and chainring combination more common in the real world. NML explained the NPL testing rig couldn’t cater for the larger size of a 50+ tooth chainring, so they opted for 20-tooth sprockets front and rear for a more realistic test setup because using very small sprockets might artificially inflate the efficiency results. Never the less, given the 20-tooth setup, the tests do not represent a typical track bike setup and as such the results will not report the absolute values that might be found with a chainring and sprocket setup.

The testers lubricated and “run in” two Dura-Ace chains prior to testing. The “run-in” process included running both chains for 60minutes at 250w and 90rpm as delivered with factory lube. Followed by three separate ultra-sonic bath treatments and drying cycles. The chains were then soaked in Ceramic Speed UFO Drip, in watertight bags, in a hot water ultrasonic bath for 60 minutes each with agitation throughout to promote penetration of the lubricant. The chains were then dried and finally run for a further 30 minutes at 250w and 90rpm. These two chains were then tested on both the Enduo and the Shimano sprocket setup.

All the tests were conducted at a constant rotational speed of 480rpm. I asked for the rationale behind choosing 480rpm to which NML explained that a cadence of 100-120rpm is considered typical and for track cyclists with a gear ratio between four and five, 480rpm sits comfortably within the range the rear sprocket will experience.

New Motion Labs has provided the findings from these tests conducted by the National Physics laboratory. The testers reported the Dura-Ace chains are more efficient running on a NML sprocket than the tested Shimano sprocket by 0.2-1% (min-max) depending on the power applied, exact setup and chain run-in time.

While the NPL presented two datasets (one for each chain) to make the results clearer, NML has presented the average of the raw data for each setup. In the raw data, each power output value had a corresponding efficiency value, these values varied depending on the chain and sprocket in use. NML used these data points to plot a line of best fit for both setups, which is the results represented in the graph above.

The test report does note that some uncertainty does remain around the testing rig accuracy. The NPL does note the accuracy of the rig to be +/-0.1% but it is unclear the effect different chains, temperature, and lubricant might affect the rig.

New Motion Labs plans to conduct its own testing to determine the absolute gains on a track bike using a specifically designed testing rig at Bath University, which will enable testing using track chainrings and sprocket setups. Pandemic related delays have meant this has not been possible until now, but NML is confident this will begin as early as next week.

NML was keen to stress the testing carried out so far was using its first prototype sprocket, made from tooling steel and not manufactured by a chainring manufacturer as the final version will be. NML are confident this steel prototype has negatively impacted the initial test results and claim future testing of the final design and production-ready sprocket will achieve the full 1% efficiency increase.

It is worth noting NML has only looked at efficiency in this round of testing. While the group claims the new sprocket will lead to increased durability, the testing to prove this takes considerably longer and is still ongoing. NML told me that the focus with testing until now has been on proving the efficiency increase, as this is what its current customers – track racing teams – need and want.

I asked Marcel Fowler, CEO of NML, if there was a chance the increased efficiency and claimed increase in durability of the Enduo Evolve sprocket might have a knock-on effect and actually increase wear rates on the chain. Mark explained:

“In reality, the reason that sprocket and chainring teeth wear is due to chain elongation, better known as ‘chain stretch’, which is a result of internal wear within the chain. This causes the chain to ride higher on the teeth and to wear down the tooth tip, often known as hooking. The Evolve significantly reduces the rate of chain elongation, not only increasing the life of the chain, but the sprocket and chainring teeth as well.”

NML hope to begin taking pre-orders in May.