The final podium at the Tour of the Alps.

Simon Yates wins the Tour of the Alps: Daily News

Simon Yates closed out the week with the overall victory at the Tour of the Alps, proving his form as the the Giro d'Italia looms.

The final podium at the Tour of the Alps.

Simon Yates closed out the week with the overall victory at the Tour of the Alps, proving his form only a little more than two weeks before the Giro d’Italia.

Yates wins the Tour of the Alps

Simon Yates secured the overall win at the Tour of the Alps on Friday, finishing safely in the fifth and final stage, which was won by Felix Grossschartner.

The short but difficult day on the bike saw a strong break form in the early goings, with Grossschartner, Thibaut Pinot, and Dan Martin among those making it into the move. Martin was among those eventually dropped on the tough parcours, but a handful of the escapees held out into the finale.

Grossschartner powered off the front on the second trip over the Lago di Tenno and went up and over the final climb solo. He held on through the descent and the flat run-in to the line to take the stage win 34 seconds ahead of runner-up Nicolas Roche, with Alessandro De Marchi taking third on the day. Yates finished with a much reduced pack 40 seconds later to secure his GC win, with Pello Bilbao and Aleksandr Vlasov rounding out the overall podium. 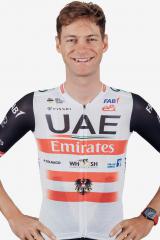 Tibco-SVB has provided an update on Sarah Gigante, who suffered multiple injuries in a crash at La Flèche Wallonne and will miss what would have been her Liège-Bastogne-Liège debut.

According to the team, Gigante has undergone a successful collarbone surgery, and will now spend six weeks recovery from fractures to her clavicle, elbow, and fibula.

“I flipped over someone’s bike and went right over the handlebars,” Gigante said via a team statement. “I’ve already had surgery on my collarbone, so that’s on the mend, and my elbow and fibula will heal naturally. It shouldn’t be too long before I am back on the road. I’m being taken very good care of by my team and support network in the meantime.”

According to The Guardian, Former British Cycling and Sky doctor Richard Freeman is appealing after the Medical Practitioners Tribunal Service found his fitness to practice medicine impaired and removed his name from the medical register. Freeman was found guilty of having ordered testosterone to British Cycling headquarters in 2011 “knowing or believing” it was for a rider.

The Guardian reports that the hearing would likely last two days, potentially in November or December.

Het Laatste Nieuws reports that Remco Evenepoel has opted to not get vaccinated for COVID-19 ahead of the Giro d’Italia to avoid the possibility of side effects before the race.

Evenepoel could have decided to receive a vaccination next week as one of the Belgian athletes set to compete in the upcoming Tokyo Olympics, but he plans to get it after the Giro instead so as not to have to deal with potential side effects so soon before the Italian Grand Tour. Deceuninck-QuickStep team doctor Philip Jansen told Het Laatste Nieuws that Evenepoel already has the presence of antibodies, which suggests that he may have had an asymptomatic infection at some point in the past.