Brent Van Moer (Lotto Soudal) spoiled the day for the quick men when he escaped from the breakaway on the final climb of the Critérium du Dauphine to take stage 1 honours. Sonny Colbrelli (Bahrain Victorious) and Clément Venturini (AG2R Citroën) finished second and third from the remaining peloton 25 seconds behind Van Moer.

The peloton was active in the opening kilometres of the race and eventually, a breakaway of four slipped off the front of the race. On the hilly terrain the breakaway struggled to stay together and with 78 km to go was reduced to three riders. Their gap had been up to five minutes but with 35 km to go had dropped to three minutes.

On the final climb of the day, the breakaway again fractured when Van Moer left Patrick Gamper (Bora-Hansgrohe) and Cyril Gautier (B&B Hotels p/b KTM) behind. The three had a minute and a half advantage on the chasing peloton led by Ineos Grenadiers.

A few riders attacked on the final climb including Felix Gall of Team DSM, but Van Moer had enough of a headstart on the chasers behind to stay away to the end. He will wear the yellow leader’s jersey into stage two on Monday. 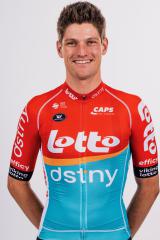