Caleb Ewan picked up his second win so far this Giro d'Italia on Friday's stage 7, sprinting to victory in Termoli. Caleb Ewan (Lotto-Soudal) picked up his second win so far this Giro d’Italia on Friday’s stage 7, sprinting to victory in Termoli.

The 181 km stage from Notaresco came down to a bunch kick after the main breakaway was caught with around 17 km to go. Teams began jockeying for position as the peloton neared a late uncategorized ascent, and then with the pack lined out, Francesco Gavazzi (Eolo-Kometa) jumped off the front with around a kilometer to go. Daniel Oss (Bora-Hansgrohe) marked the move, however, and the rest of the field soon caught up to the pair.

Fernando Gaviria (UAE-Team Emirates) launched from afar with 400 meters still to go and opened up a gap as the riders went through the last few corners of a winding finale, but Ewan closed him down and then exploded past in the last 200 meters. He held on to take a clear win with Davide Cimolai (Israel Start-Up Nation) settling for second on the day and Tim Merlier (Alpecin-Fenix) nabbing third. Attila Valter (Groupama-FDJ) finished safely on the day to retain the overall race lead. 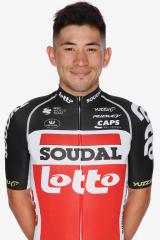