Elise Chabbey took over the race lead from Grace Brown.

What seemed like a doomed breakaway turned into a dream come true for Anastasiia Chursina who won the second stage of the Vuelta a Burgos Feminas. Alice Barnes (Canyon-SRAM) won the bunch sprint to take second on the stage ahead of Amalie Dideriksen (Trek-Segafredo) in third. Elise Chabbey (Canyon-SRAM) finished ahead of Grace Brown (Team BikeExchange) and took over the race lead ahead of stage 3.

Out front Anastasiia Chursina (Alé BTC Ljubljana) fought to remain ahead of the peloton behind without her two breakaway companions. The race behind came back together, with Team BikeExchange working to keep the race leader Brown at the head of the race.

Inside 1 km to go Chursina led the race by over a minute, with Canyon-SRAM and SD Worx chasing down the lone rider. Barnes won the sprint for second with Dideriksen taking third on the day. 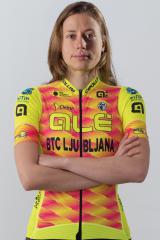