The young Danish sprinter has placed second on six occasions this season.

After a series of second places throughout the spring Emma Norsgaard (Movistar) finally notched her first victory of the season at the Festival Elsy Jacobs. Stage two came down to a reduced bunch sprint where Maria Confalonieri (Ceratizit-WNT) was second and Leah Kirchmann (Team DSM) took third.

Unfortunately, after a nasty crash earlier in the day, the race leader Lorena Wiebes (Team DSM) struggled. Norsgaard moved into the lead of the general classification ahead of stage 3 by only a few seconds over Kirchmann.

A duo of escaped riders was caught with only 7.2 km to go. Ruth Winder (Trek-Segafredo) was the first big move to come out of the peloton on the penultimate climb, Leah Thomas (Movistar) was close behind. At the top of the climb the peloton had splintered but a clear break had not been made.

Attacks flew in the final 6 km to the finish as groups of riders regained contact with the front of the race. With each attack, the peloton again split, but no one was able to get away. Movistar led the peloton towards the finish in the final kilometre for their young sprinter Norsgaard who was able to take a stunning victory over Confalonieri and Kirchmann. 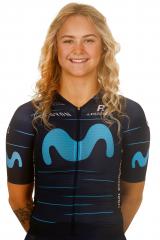