Emma Norsgaard (Movistar) won her second consecutive stage of the Festival Elsy Jacobs and with it the general classification on Sunday. Maria Confalonieri (Ceratizit-WNT) finished second after opening up the sprint in the closing meters. Sofia Bertizzolo (Liv Racing) finished third.

When a solo rider was caught with 37 km to go the peloton split and a group of 18 riders went clear. Attacks were relentless but some crafty work by yellow jersey wearer Norsgaard and her teammate Leah Thomas led the bunch to the finish group compact.

Norsgaard was able to sprint to her second straight victory at the Festival followed by Confalonieri and Bertizzolo. The Danish rider was also able to hold on to the general classification lead, along with the best young rider classification and the points competition. 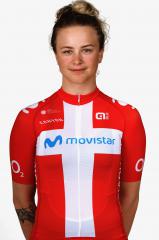