Brown won from a breakaway of three that broke away in the closing kilometres of the stage. The first stage of the Vuelta a Burgos came down to a sprint from a group of three. Grace Brown (Team BikeExchange) took the win and will lead the overall into the second stage of the race. Elise Chabbey (Canyon-SRAM) and Niamh Fisher-Black (SD Worx) came in second and third. The peloton containing many of the race favourites finished five seconds later.

A break of two slipped away from the much-reduced peloton over the top of the Alto de la Lora climb with 5 km to go. Fisher-Black bridged to join Brown and Chabbey while Trek-Segafredo chased.

With 1.5 kilometres to go the three out front had gained a 16-second advantage on the chasing peloton, but the uphill drag to the finishing town favoured the peloton’s speed rather than the breakaway’s climbing abilities.

Brown proved to be the strongest sprinter of the three and came away with stage honours and will wear the leader’s jersey on stage 2. 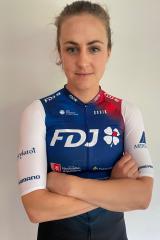