Joe Dombrowski took his first Grand Tour stage win on stage 4 of the Giro d'Italia, while a few GC hopefuls gained time on the day and others struggled. Joe Dombrowski (UAE-Team Emirates) stormed to his first Grand Tour stage win on Tuesday’s stage 4 of the Giro d’Italia after spending nearly five rain-soaked hours in break. Fellow escapee Alessandro De Marchi (Israel Start-Up Nation) nabbed second on the day ahead of Filippo Fiorelli (Bardiani-CSF-Faizanè), and De Marchi took the pink jersey in the process. Behind, there was some action among the overall favorites as well, as a few big names picked up time while others struggled.

The 187 km stage from Piacenza saw a big breakaway move jump clear early on, with Dombrowski, De Marchi, and Fiorelli among those in the escape. The break held on to battle for the stage win, with Rein Taaramae (Intermarché-Wanty-Gobert Matériaux) and Chris Juul-Jensen (BikeExchange) leading into the Colle Passerino that topped out only a few kilometers from the finish, but Dombrowski and De Marchi gradually reeled them in. Near the top of the climb, Dombrowski attacked and pulled away, and despite De Marchi’s best efforts, there was no catching the 29-year-old American from there. For De Marchi, at least, second place would come with the consolation prize of the overall race lead.

🎙️ @JoeDombro: “It was a hard day, I wasn’t sure the breakaway could make it but when I saw that we had 6-7 minutes from the peloton, I started to believe in it.”

A little ways down the climb, João Almeida (Deceuninck-QuickStep) was among the notables unable to keep the pace in the GC group. As riders continued to drop off the back, Giulio Ciccone (Trek-Segafredo) jumped off the front of the group. Mikel Landa (Bahrain Victorious) then did the same, and then Egan Bernal (Ineos Grenadiers), Hugh Carthy (EF Education-Nippo), and Aleksandr Vlasov (Astana-Premier Tech) bridged to make for a five-rider selection gaining ground on the rest of the GC hopefuls.

Bernal would lead that quintet over the line 1:37 behind Dombrowski, gaining 11 seconds on the likes of Remco Evenepoel (Deceuninck-QuickStep), Romain Bardet (DSM), and Simon Yates (BikeExchange). Vincenzo Nibali (Trek-Segafredo) and Jai Hindley (DSM) would lose 34 seconds to the Bernal group, while Almeida arrived more than four minutes behind the 2019 Tour de France winner. 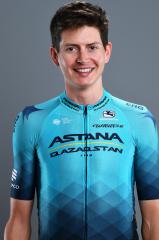