Taco van der Hoorn (Intermarché-Wanty-Gobert Matériaux) won Monday’s stage 3 of the Giro d’Italia after a long day off the front.

The 27-year-old Dutchman joined the breakaway move that got clear in the early goings of the 190 km stage from Biella to Canale, and with 18 km to go, he and fellow escapee Simon Pellaud (Androni Giocattoli-Sidermec) attacked out of the break. The pair rode into the last 10 km with around 40 seconds on the peloton with Bora-Hansgrohe leading the pace in the pack, and then Van der Hoorn surged clear of Pellaud to press on alone.

As the kilometers ticked down, other teams started helping with the chase, but the gap was still at 15 seconds as Van der Hoorn went under the flamme rouge. Van der Hoorn navigated through the final curves and onto the finishing straight, where he celebrated what was both his and his team’s first ever Grand Tour stage victory. Four seconds later, Davide Cimolai (Israel Start-Up Nation) sprinted to runner-up honors ahead of Peter Sagan (Bora-Hansgrohe).

Filippo Ganna (Ineos Grenadiers) finished with the peloton to maintain his GC lead. 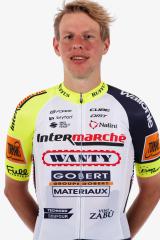