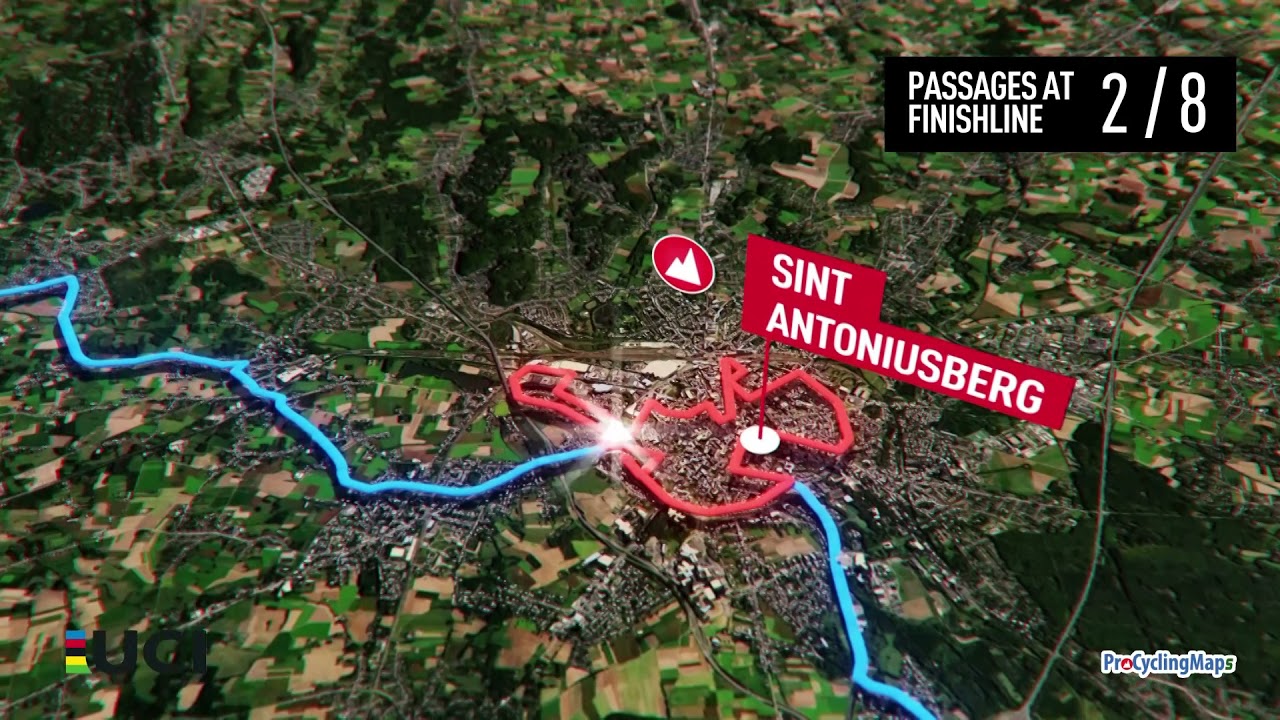 It’s four months until the 2021 Road World Championships get underway in Flanders, Belgium. As the local organising committee starts to ramp up its promotion of the event, a promo video for the elite men’s road race course caught our eye.

It’s not that the course is incredibly difficult (it’s ‘only’ got 2,560 metres of climbing), nor is the race any longer than a regular Worlds (268.3 km). Rather it’s just … messy. Convoluted, strange, and messy.

There’s no one-size-fits-all approach to route design for the elite men’s road race at Worlds, but a common design looks something like this. The race starts in one town, the riders do a long-point-to-point section to the finishing town, then they do some number of circuits around that finishing town (e.g. Harrogate in 2019 or Bergen in 2017). Sometimes there are two circuits and the riders will do a bunch of the first, then finish with the second (see Innsbruck in 2018). Flanders 2021 is more complicated again.

Before we get to the men’s race though, let’s check out the elite women’s event.

From the start in Antwerp, the riders head 56 km south-south-east to the finishing town of Leuven. There the women will do 1.5 laps of the 15.5 km finishing circuit (four climbs per lap) before continuing south to the “Flandrien circuit” where they’ll do a single lap of the roughly 50 km loop (which features another five climbs). Then it’s back north to Leuven to conclude the race with a further 2.5 laps of the finishing circuit.

Already that’s pretty unusual – once riders are on the finishing circuit at Worlds that’s where they tend to stay – but that’s nothing compared to the men’s race.

The video at the top of this article gives you a clear idea of just how much back and forth there is. You can see it in the coloured strip at the bottom of the profile below, too.

It’s not clear why the route is as complicated as it is. The official website says the Flandrien circuit was added “to make the competition even more attractive and selective”, but why not do the two Flandrien circuits back to back, then all of the Leuven circuits? All of the back and forth between circuits seems like a logistical nightmare. We asked the folks at the organising committee for more information but they haven’t responded.

Thankfully, that organising committee includes staff from Flanders Classics, organisers of the Tour of Flanders. That race, and others in the Flanders Classics stable, routinely features intricate finishing loops stacked on top of one another. So it’ll all be fine from a logistical point of view.

The riders won’t care. They’ll just take note of when to expect the various climbs, and then they’ll simply follow road signs and course marshals. It won’t matter for those of us watching on TV, either.

Ultimately, the convoluted course design won’t really affect the race, as unusual as it is. Perhaps the bigger question is why Worlds is happening in Flanders and yet none of the region’s legendary climbs are featured.

The Muur van Geraadsbergen, the Koppenberg, the Oude Kwaremont, the Paterberg – none of these will be featured. All of those climbs are some 100 km to the west of Leuven, on the other side of Brussels. Instead we get climbs like the Moskesstraat, the Smeysberg and the S-Bocht Overijse, as featured in Brabantse Pijl.

There’s a simple reason why Flanders’ best climbs aren’t being featured. Money. The town of Geraardsbergen was in the running to host the 2021 Worlds but ultimately couldn’t afford the €3 million bill the UCI was asking to host the event. As we now know, the event went to towns further to the east.

It’s a shame. Who wouldn’t want to see the world’s best riders – male and female – battle it out for the rainbow jersey on some of cycling’s most mythical climbs? Instead we get a Worlds that’s decidedly Belgian, in all its convoluted-course glory, without the climbs that would make it a truly Belgian Worlds.

Even with all its quirks, Worlds in Flanders is going to be great. Four months to go … but who’s counting?