Thursday’s headlines included racing news, kit reveals, and Fabio Jakobsen saying that Dylan Groenewegen “has not offered a personal apology” for his role in the crash at last year’s Tour of Poland that left Jakobsen seriously injured.

Ethan Hayter climbed to victory on the challenging second stage of the Volta ao Algarve.

The 182.6 km stage from Sagres to Fóia concluded with three categorized climbs, with the third-category Alferce climb and the second-category Pomba climb leading into the first-category Alto da Fóia finishing climb. Hayter’s Ineos Grenadiers whittled the pack down on the final ascent, and by the final kilometer, Hayter and his teammates Iván Sosa and Sebastián Henao were part of a group of six riders at the head of the race.

The stage came down to a sprint atop the climb, where Hayter powered to the win ahead of João Rodrigues and Jonathan Lastra. 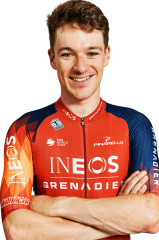 Annemiek van Vleuten powered to her third victory of the 2021 season on Thursday on the opening stage of the rescheduled Setmana Ciclista Valenciana.

Van Vleuten attacked on the final climb of the 125 km stage from Barxeta to Gandía, and she quickly soared to a sizable gap over a chasing Mavi Garcia, with a select group in pursuit behind Garcia. Van Vleuten went up and over the climb alone, and then took on a steep downhill stretch. She crashed on the descent but quickly remounted and continued on to the finish to take the win with a comfortable margin of over two minutes.

Garcia took second on the day at 2:06 back with Katrine Aalerud in third, 2:21 down.

Jakobsen: Groenewegen ‘has not shown willingness to take any responsibility for his actions’

Fabio Jakobsen said in a series of Tweets on Thursday that he was “disappointed” with the way Dylan Groenewegen spoke of a recent meeting between that two, and that Groenewegen has yet to apologize for his role in the crash at last year’s Tour of Poland that left Jakobsen seriously injured.

Groenewegen said last week that he had met with Jakobsen in person for the first time since that crash, and that the Dutch sprinters had had a “pleasant” conversation. Jakobsen offered his own take on the situation on Thursday on Twitter. He also noted that his lawyers were handling proceedings against Groenewegen now.

“I would like to set the record straight, though: Dylan has not offered a personal apology and he has not shown willingness to take any responsibility for his actions,” Jakobsen wrote amid a series of tweets. “I still would like to reach an understanding with Dylan, but it takes two to tango.”

For the second straight year, the EF Education-Nippo organization will take on the Giro d’Italia in an alternate kit.

The American WorldTour team, whose kit collaboration with Palace generated plenty of conversation last year, unveiled its new look for this year’s race on Thursday. The team will sport a kit combining quite a few different colors in Italy this May.

Ready to roll for Saturday pic.twitter.com/o0L3go39Vs

EF isn’t the only squad that will be showing off new threads at this year’s Giro d’Italia. Israel Start-Up Nation also unveiled an alternate look for the race on Thursday.

The team will swap out its traditional white and blue kit for a predominately red kit featuring blue accents.

What do you think?
____
#Giro pic.twitter.com/uyeiiyIhD0

Maryland Cycling Classic organizers have announced several more teams that will join the five squads that have already been unveiled as participating teams for the inaugural edition of the event.

On Thursday, organizers revealed that Medellin, Amore e Vita, Hagens Berman Axeon, Elevate-Webiplex, and Illuminate will be in attendance alongside Trek-Segafredo, BikeExchange, Rally, Aevelo, and Wildlife Generation later this year. The one-day race, part of the UCI ProSeries in its first year, will take place in Baltimore, Maryland, on September 5.