Andrea Vendrame claimed his first Grand Tour stage win after a long day in the break on Thursday's stage 12 of the Giro d'Italia.

Andrea Vendrame (AG2R Citroën) claimed his first Grand Tour stage win after a long day in the break on Thursday’s stage 12 of the Giro d’Italia.

Vendrame was part of a move that went clear after a hectic first hour of racing that saw multiple crashes, with Marc Soler (Movistar) and Alessandro De Marchi (Israel Start-Up Nation) among those abandoning the race after heavy falls. Once the break did finally get away, the peloton gave them plenty of breathing room. A few tough climbs then whittled away at the escape group over the course of the stage, while also giving Geoffrey Bouchard (AG2R Citroën) the chance to nab enough mountain points to take a commanding lead in that classification.

On the day’s final climb, Vendrame attacked solo off the front, but he was caught up again with around 13 km to go, making for a lead quartet of Vendrame, Chris Hamilton (DSM), Gianluca Brambilla (Trek-Segafredo), and George Bennett (Jumbo-Visma). That group of four rode into the last few kilometers together, when Hamilton put a big dig that only Vendrame followed while Brambilla and Bennett looked at each other and missed out.

Vendrame led Hamilton into the last few hundred meters and then opened his sprint, powering to a clear win as Hamilton settled for second. Brambilla was the next rider across the line, but only after a late swerve that left Bennett throwing up a hand in frustration; Brambilla was later relegated to fourth. A little more than 10 minutes behind Vendrame, Vincenzo Nibali (Trek-Segafredo) arrived at the line a few seconds ahead of the peloton, and then the pack arrived with Egan Bernal (Ineos Grenadiers) finishing safely in the group to retain his race lead. 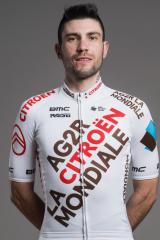