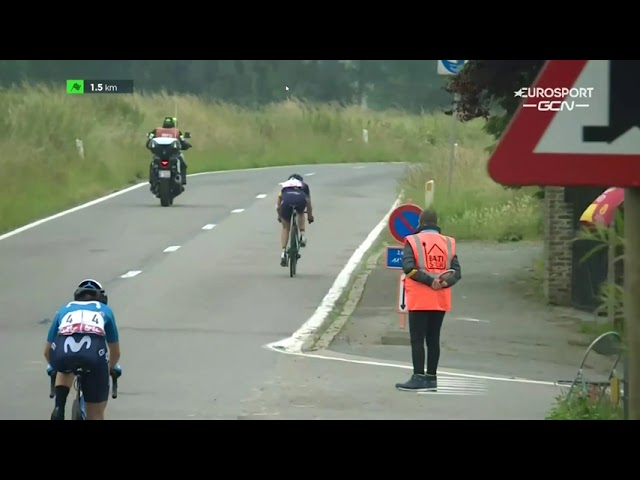 Amialiusik's stage 2 win is the second nail-biting victory by Canyon-SRAM in June.

While all eyes were turning towards France, the women’s peloton raced circuits around Galmaarden, Belgium for the second road stage of the Lotto Belgium Tour.

Thursday’s 137.5 km course featured cobbles, steep climbs, and some sketchy corners. After winning the opening prologue but losing the lead after stage 1, Ellen van Dijk (Trek-Segafredo) was hungry to take back her jersey on stage 2. The Dutchwoman looked like the strongest on the day but some exemplary teamwork from Canyon-SRAM foiled any plans she had of victory.

It looked like the race was all but over when Van Dijk, Lotte Kopecky (Belgium), and Alice Barnes (Canyon-SRAM) took off with 62 km to go. Van Dijk led the charge and the four along with Rotem Gafinovitz (Bingoal-Chevalmeire) who had been out front already, worked well together. At least until Kopecky suffered a rear flat and was forced into the peloton once more.

With Gafinovitz dropped and Kopecky gone, Van Dijk and Barnes kept their heads down. But without the other two momentum slowed. Barnes could barely pull through, and Van Dijk got frustrated. Van Dijk attacked, only for Barnes to drop the Dutch rider on a descent, seemingly by accident. Soon after, Van Dijk’s gears seized up and she watched Barnes ride away, stuck in her biggest gear.

Since Van Dijk was no longer leading the race Trek-Segafredo rallied to chase down a solo Barnes. Once they’d got to her the board reset.

With 23 km remaining Alena Amialiusik (Canyon-SRAM) followed her teammate Barnes’s efforts with one of her own. Next Hannah Ludwig (Canyon-SRAM) tried her hand and spent a bit of time on a solo mission off the front.

As soon as Ludwig was brought back in the final 15 km Van Dijk attacked again, taking Amialiusik, Lorena Wiebes (DSM), and Kopecky with her. They were joined by Lourdes Oyarbide (Movistar) and with some cooperation gained significant distance from the peloton.

Wiebes was the first of the front group to make a move, but with only 2 seconds seperating the Dutchwoman from Van Dijk on the general classification she had a hard time staying away.

Amialiusik, who had no GC ambitions at this stage, could sit back and relax. She’d been able to rest while Barnes and Ludwig were both up the road, and again she took advantage of the slipstream.

Wiebes returned to the group with 2.5 km to go and it was Amialiusik who reacted. The former Belarusian champion rode away and the rest looked at each other. The hesitation was just enough and in the end, Amialiusik won the stage by 3 seconds. Wiebes took the sprint for second with Kopecky coming third.

It was Amialiusik’s first win since she won both the ITT and road race at the Belarusian National Championships in 2018. In the years between victories, Amialiusik has suffered multiple injuries and some bad luck. On top of that she is a consummate worker for other Canyon-SRAM riders.

But on Thursday she got her chance, after the rest of her team opened the door for her, and she took it with both hands.

Amialiusik’s victory is another step towards a more aggressive and winning Canyon-SRAM. The team has been picking up young riders, bolstering its development side, and improving every year. Another great example is Elise Chabbey’s win at the Tour de Suisse.

Headed to the Giro Donne in the beginning of July the team has 10 days of chances for more wins, and judging by recent performances team management has many cards to play. If Canyon-SRAM wants to go for the general classification they have 2020 runner-up, Kasia Niewiadoma. If its stage wins they’re after, the possibilities are endless.