Demi Vollering won the sprint to win La Course by le Tour de France, benefitting from the formidable talents of her SD Worx teammates throughout the race.

Attempts to form a breakaway were relentless from the start of the 107.4 km route from Brest to Landerneau. Two riders eventually escaped and led the race onto the punchy laps in the last 45 km, but they were soon caught by the peloton and the attacks started again.

An elite lead group that included some of the pre-race favourites approached the finishing climb with a small gap, but the Jumbo-Visma-led chasing group swept them up at the bottom of the Côte de la Fosse aux Loups.

Cecilie Uttrup Ludwig (FDJ Nouvelle Aquitaine Futuroscope) tried an all-or-nothing attack inside 2 km to go, but Anna van der Breggen (SD Worx) was on her case, bringing Grace Brown (BikeExchange) up with her before stalling and allowing the group to swell to eight. It was the world champion who seemed to make the first move in the finishing straight, ultimately doing the leadout for her teammate Vollering, who timed her sprint perfectly to come round Marianne Vos (Jumbo-Visma). Barely anything separated Vos from Ludwig on the line, but it was the Dane who clinched second place. 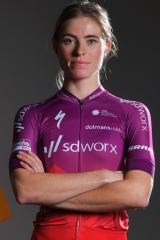 Preview: Your guide to the 2021 La Course by the Tour de France