The two were part of a five-person breakaway that went clear early in the race. A group of five including Deignan and Chabbey went away early in the hilly stage. Canyon-SRAM was the only team in the break with two riders; Chabbey and Mikayla Harvey. Behind a chase of five riders contained a teammate for Deignan in Lucinda Brand, but the leading group worked together and were able to gain over a minute gap from the chasers with under 50 km to go.

Deignan was aggressive in the break but her attempts at a solo move were thwarted by her break mates. With under 14 km to go Chabbey and Deignan got away from the other three and rode on the the finish.

In the two-person sprint, Deignan was the first to wind up with Chabbey perfectly placed on her wheel. Chabbey came around Deginan in the closing 100 meters to take her first big win on home soil. 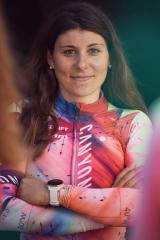