The sprint for stage 6 of the Tour de Suisse.

Kron takes stage 6 of the Tour de Suisse as Costa is relegated, while Carapaz maintains his GC lead. 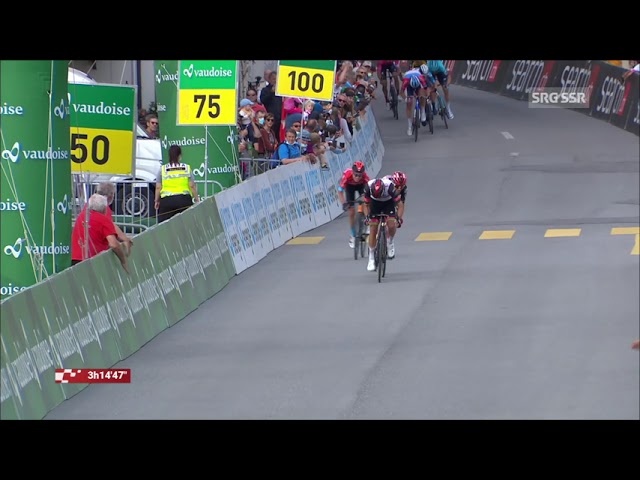 The 130.1 km stage from Fiesch to Disentis Sedrun saw a big breakaway move get clear in the early goings. The peloton gave the escapees plenty of breathing room, making it clear that the stage win would come from the break, and there were plenty of attacks and counter-attacks in the lead group as it made its way toward the finish.

Kron, Costa, and Hermann Pernsteiner (Bahrain Victorious) jumped clear with around 5 km to go in an uphill stretch before the finish, and they held on to battle for the win in the end. Costa, a three-time overall winner of the race, began to open his sprint as they rounded a final bend with some 200 meters to go. He came out of the bend still sprinting at a noticeable angle, moving from his right to his left across the road. With 100 meters to go and Kron on his wheel, Costa swerved further to his left before correcting himself. He held on to cross the line first with Kron raising an arm in remonstration behind. Pernsteiner finished third, one second back.

A few minutes later, the race jury relegated Costa to second for his sprint, declaring Kron the winner.

The peloton arrived 2:49 behind the escapees with most of the major GC contenders tucked in safely. Richard Carapaz (Ineos Grenadiers) continues to lead the race with two stages to go.

The sprint for stage 6 of the Tour de Suisse.