Stefan Küng raced a perfect ITT on home roads to take stage 1 victory and the race lead at the Tour de Suisse.

Young specialist Stefan Bissegger (EF Education-Nippo) set the early benchmark and spent over an hour in the hot seat. The 22-year-old rider was the surprise winner of stage 1 at Paris-Nice earlier this year, and it looked for a while like his time around the Fraunfeld course might also be untouchable. But European champion Küng rode a perfect TT and finished four seconds faster than his young compatriot. Italian rider Mattia Cattaneo of Deceuninck-QuickStep joined the Swiss pair on the podium in third place.

There were no disasters for the GC favourites, with Julian Alaphilippe (Deceuninck-QuickStep) finishing strongest in fifth place, and Neilson Powless (EF Education-Nippo), Maximilian Schachmann (Bora-Hansgrohe) and Richard Carapaz (Ineos Grenadiers) just outside the top 10. Jumbo-Visma’s Tom Dumoulin made his return to racing with a creditable 16th place having not raced since last October. 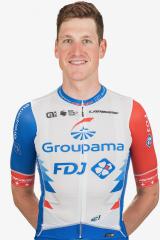