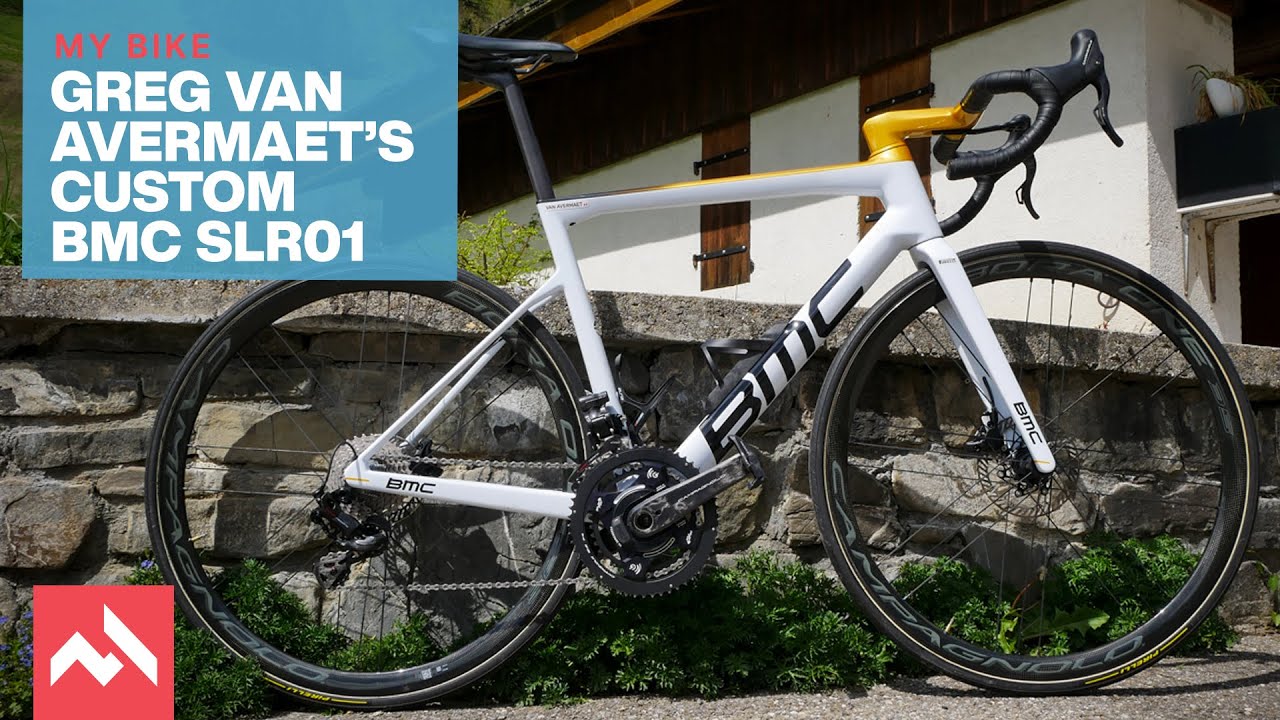 Clean and tidy after a quick spruce up by the team mechanic.

What's new for Van Avermaet in 2021? Well he's back on BMC after two years on a Giant.

Clean and tidy after a quick spruce up by the team mechanic.

This year you very well may have caught a few videos where I’ve Zoomed (is that a verb?) pro riders and chatted to them about their bikes, or at least the one that they have in their garage at home, the setup they ride day in day out when training. It’s been fun, a little challenging, and insightful at times. The biggest takeaway seems to be that saddlebags can be pro, mid-priced wheels are the goto for most when at home and having to fend for themselves, disc brake bleeding has been a lesson for some during the lockdown, and some professionals don’t know how to handle their camera phone too well.

All the previous My Bike videos were done via zoom because of, well, you know why! But with things getting a little easier here in France and the AG2R Citreon training camp for the Tour being held just down the road from where I live, I managed to sit down IRL with a professional cyclists, no screen, no dodgy wifi connection, just face to face, with a mask on obviously.

That rider was AG2R’s new signing for this season, Greg Van Avermaet. Moving over to AG2R has reunited Greg with BMC. As I’d find out, the bike would be one of the factors that swayed Van Avermaet when on the market for a new team at the end of last season. Quite a statement for the brand.

Greg’s choice of bike for most races, and the one he was using while at camp, is the BMC Teammachine SLR01 in a very fetching white and gold lively, a paint scheme I’m sure he’ll be hoping he doesn’t have to change come the evening of July 24th once the Men’s Olympic road race wraps up.

What is new for Greg this year, or more precisely another reunion for Greg, is that of the groupset he’s using, Campagnolo. Back in 2007, in his Predictor-Lotto days as a youthful neo-pro, his first professional issued bikes were decked out with Campagnolo Record 10speed. For 2021, it’s back to Italian engineered shifting, in this case, Super Record EPS 12 speed (we’ve come a long way since 2007, haven’t we). Disc brakes are obviously de rigor now for the majority of the peloton (we’re looking at you Ineos). But is Greg happy to be back on it? Well for that answer, I’m going to force you to watch the video, all I’ll say is it’s not quite a “Froome disc brake review moment” but still an honest answer to the question of if he likes returning to what could be classed as the underdog of the “the big three”!

Wheels are also from Campagnolo, in this case, the very lush looking Bora Ultra 35 wrapped in Pirelli tubulars; now, there’s something you won’t find in the company’s catalogue. We have it on good authority that Pirelli tires for the time being at least are being produced by french manufacturer Hutchinson.

It’s safe to say that AG2R Citroën has had a massive shakeup with the equipment sponsor for this season. Pretty much everything has changed. BMC frames replace Eddy Merckx, a full Campagnolo groupset instead of the Shimano/Rotor/KMC mix and match set up of 2020, Mavic make way for Campagnolo, and Pirelli pushes out Vredestein. The only returning equipment sponsors are Fizik for the team’s perches and Look for the pedals.

So to find out what Greg thinks of his new setup, and for the more critical question, does he thinks saddlebags are pro, hit that play button.

For a tantalising moment, all of AG2R was in the break