Race leader Mathieu van der Poel led the race into the final kilometer himself with his Alpecin-Fenix teammates Merlier and Jasper Philipsen a few wheels back, and then Philipsen took over in the last several hundred meters. Merlier wound up to speed as the riders rounded a final corner, where Ewan and Sagan both crashed just behind him, with Ewan falling particularly hard.

Merlier held on to take the win, the second straight stage win for his Alpecin-Fenix team, with Philipsen taking second and Nacer Bouhanni (Arkéa-Samsic) in third.

Van der Poel retained his overall race lead, while the general classification saw some big names lose time for the third straight day, with Roglič arriving more than a minute behind Merlier after his late crash. 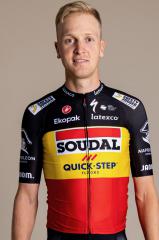